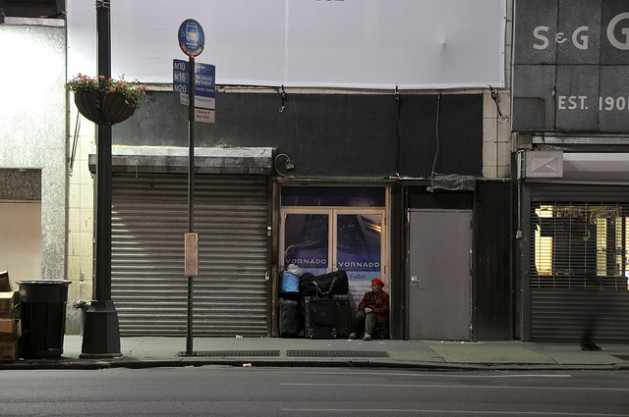 One in four families in the shelter system include an employed adult, meaning that in today's New York, a job may not be enough to get you off the street. Credit: FaceMePLS/cc by 2.0

NEW YORK, Nov 6 2013 (IPS) - When Michael Bloomberg was elected mayor of this city only weeks after the Sept. 11, 2001 terrorist attacks, few imagined that by the time he left office a new building would have risen in the shadow of the Twin Towers.

Fewer still could have foreseen that a few miles uptown, the foundation would be laid for a super-luxury condominium that, when completed, will be the tallest residential building in the Western Hemisphere, with a penthouse apartment on presale for 95 million dollars.

“Sandy, like Katrina, ripped the band-aid off the wound, a wound that is still festering." -- Joel Berg

That building, 432 Park Avenue, is part of a slew of new luxury constructions in New York which, only five years after the global financial crisis threw millions out of work, contrast starkly with a deteriorating housing picture and a widening income gap in the rest of the city.

“New York is the poster child for the national trend,” Joel Berg, executive director of the New York City Coalition against Hunger, told IPS. “The wealthy get wealthier at the expense of everyone else.”

The dissonance apparently proved too much for New York voters, who last night overwhelmingly elected progressive candidate Bill de Blasio to be the city’s next mayor with 73 percent of the vote.

The New York metro area suffers from the widest gap between rich and poor in the U.S., an issue that de Blasio campaigned on heavily, referring often to New York as “a Tale of Two Cities.”

“That inequality, that feeling of a few doing very well, while so many slip further behind, that is the defining challenge of our times,” de Blasio told supporters during his victory speech.

The outgoing mayor’s brand of politics were no clearer than during a September weekly radio address, when Bloomberg – himself the 10th wealthiest person in the world – told listeners “if we could get every billionaire around the world to move here, it would be a godsend.”

During Bloomberg’s three terms in office, “funding for AIDS has been slashed,” leaving many patients without proper housing, said Jennifer Flynn of Health Gap, an HIV/AIDS advocacy group.

Flynn hopes de Blasio keeps to his campaign promise of capping rent payments of HIV/AIDS Service Administration (HASA) clients at 30 percent of their benefits. Currently, clients can be forced to come up with the balance on their own, leaving them with little from their meagre benefits for food and daily expenses.

Nationwide, HIV rates among homeless people are eight times higher than in the general population.

With proper treatment, HIV can be kept in check- preventing it from becoming AIDS - and the risk of transmission drops to near zero.

“New York remains the centre of the [U.S.] AIDS epidemic,” said Flynn. “We need a mayor who is committed to making New York the first AIDS free city in the country.

The remark, like Bloomberg’s support of a New York Police Department stop-and-frisk programme that overwhelmingly affects minorities, struck many, even those dulled to 12 years of the aristocratic foibles of a man who spent a quarter billion dollars of his own money to get elected, as out of touch.

During three terms (made possible when the city council overturned term limits in 2008) Bloomberg became known around the country as the “nanny mayor” for his progressive stances on access to healthy foods in poor neighbourhoods, nutritional labeling, banning sugary drinks and gun control, but locally was seen as at times deaf to the underlying question of why so many residents were poor in the first place.

Activists say that whether de Blasio is able to stem the rising income gap depends in large part on undoing much of the logic of the Bloomberg years, a period that saw a reintroduction of the language of trickle-down economics into one of the most liberal cities in the United States.

According to a study by New York University’s Furman Center, median rents in New York rose 19 percent between 2002 and 2011, while the real median income of residents saw a small decline.

During the same period, the percent of rental units considered affordable for low income households earning less than 50 percent of the area median income declined from 40 to 26.

And this year, the average rental price in New York City, excluding Staten Island, rose above 3,000 dollars per month, triple the national average.

Housing advocates are quick to point out what they see as feeble efforts by the Bloomberg administration to safeguard lower income households.

But the programme was voluntary and reports found the zoning effort had led to a net gain of only 2,700 affordable housing units in a city where 1.7 million residents live below the federal poverty threshold.

De Blasio has promised he will make the 20 percent cut-off mandatory, but for thousands of families who can no longer afford any type of housing at all, the debate came too late.

In 2005, the Bloomberg administration ended a longstanding practice of assisting homeless families to obtain federal rent vouchers and subsidised housing, replacing those programmes with short-term assistance.

In 2011, that assistance was cut off, leaving many homeless families with little choice but to remain in the shelter system, which has swollen to record levels.

“The next mayor is going to confront a historical homelessness crisis,” Patrick Markee, senior policy analyst at Coalition for the Homeless, told IPS. “There are over 50,000 people in the shelter system, including 20,000 children. It’s a real black mark on Bloomberg’s legacy.”

The rise in homelessness frustrates advocates who point out the ultra-wealthy and disproportionately foreign buyers of new luxury developments often spend little time in their new pied-à-terres.

But perhaps most disturbing are city estimates that one in four families in the shelter system include an employed adult, meaning that in today’s New York, a job may not be enough to get you off the street.

“This isn’t something that happens naturally,” Berg told IPS. “It’s a failure of public policy.”

“Sandy, like Katrina, ripped the band-aid off the wound, a wound that is still festering,” said Berg. “It exacerbated existing problems.”

During 12 years in office, Bloomberg repeatedly applied a ‘financial consultant approach – one he honed for decades at his eponymous firm – to issues like poverty, notably pooh-poohing calls for an increase in the minimum wage on the grounds it would force businesses to leave New York, ignoring the inevitable fact that many minimum wage workers had already made the financially-sound decision to do so themselves.

“Bill de Blasio obviously touched a chord that resonated with a lot of people,” said Tom Angotti, a professor of Urban Affairs and Planning at Hunter College and the CUNY Graduate Center.

At the same time as he was cutting programmes for the homeless, Bloomberg welcomed developers with open arms and generous tax breaks, Angotti told IPS.

“Neighbourhoods have gone from being diverse to being sharply divided between rich and poor. You have a gentrification process that displaces tens of thousands, forcing many to leave the city because there is no affordable housing left.”

Bloomberg’s administration oversaw the rezoning of a full third of the city, spurring breakneck development in Manhattan and nearby parts of Brooklyn and Queens but also driving out those who could no longer pay rent.

Areas that were “upzoned” for greater development were more often in poorer, minority neighbourhoods while “downzoning”, which is seen as way of preserving communities, was more prevalent in wealthier, whiter areas.

Higher rents in historically Black and Latino areas made this year’s election in part a referendum on gentrification.

The question of displacement is especially painful for minority residents, many of whom lived through the city’s darkest years in the 1970s – when middle class families abandoned entire neighbourhoods and fled for the suburbs – only to find its new cachet among the professional and jet set has priced them out.

“People tell me this all the time – they struggled for decades and generations to improve their neighbourhoods,” said Angotti. “Why should we do all this work?”