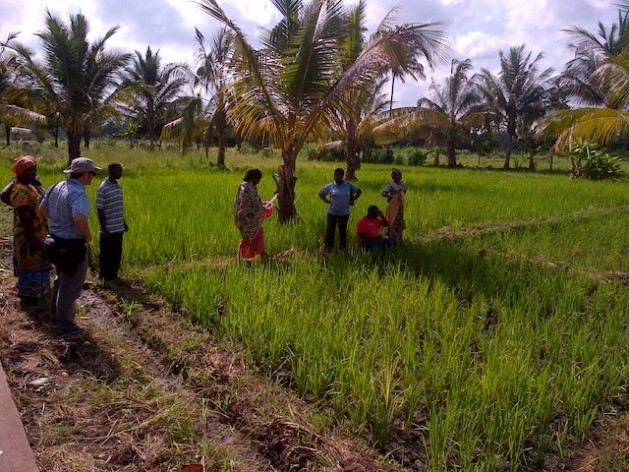 MOROGORO, Tanzania, Nov 14 2013 (IPS) - When Habiba Msoga from Kiroka village, in Tanzania’s Morogoro Region, first began applying a method of rice cultivation that was different from what her fellow farmers traditionally used, they laughed at her.

But now three years later, as she falls asleep each night in her newly built brick home that will soon have electricity, she could not be happier.

“When I started some people were laughing at me because they thought it was impossible to grow rice without flooding the field. But I have proved them wrong. My harvests now are just too much,” the 37-year-old mother of three told IPS.

“Despite the bad weather, my income has increased a lot since I started practicing these techniques. I can now pay for my children fees and foot their medical bills.” -- Muhidini Kigadu, a farmer from Kiroka village

In this remote village, which is located about 218 km from Tanzania’s capital Dar es Salaam, people knew little of alternative farming techniques until the Food and Agriculture Organisation of the United Nations (FAO) and the local Sokoine University of Agriculture (SUA) started a project to introduce climate smart agricultural techniques three years ago.

Only Msoga and 267 others – a fraction of the village’s almost 3,000 farmers – joined the project as not everyone was keen to embrace the System of Rice Intensification or SRI. It is a cultivation technique that involves transplanting eight- to 10-day-old paddy seedlings instead of waiting the usual 20 days to do so. Because of the reduced water supply here, the new technique was a godsend to Msoga.

The Mahembe Mwaya and Kiroka Rivers are the main sources of water for Kiroka village. And in the past they used to flow throughout the year. But because of reduced rainfall over the years, these rivers became seasonal, and the dwindling water supply has affected the farmers here.

So SRI eliminated the necessity of Msoga having to submerge her paddy fields underwater as people here traditionally do.

Tanzania has a complex climate with wide variations of temperature and rainfall distribution. But according to the Economics of Climate Change study commissioned this year by the government, the minimum and maximum temperatures in Tanzania have increased over the last 30 years. And rainfall patterns have become erratic, with most areas receiving less than 500 mm a year compared to 1,000 mm a year previously.

This has impacted this East African nation’s farmers who constitute 80 to 90 percent of the population of almost 48 million, as they largely depend on rainfed agriculture. Tanzania’s agriculture sector accounts for 30 percent of its GDP of 28 billion dollars.

The government estimates that average maize yields could decrease by 16 percent by 2030 — a loss of around one million tonnes per year — and by 25 to 35 percent by 2050.

But farmers like Msoga know that they can now survive amid the reduce rainfall. Soon after applying SRI, Msoga began harvesting more than triple her usual yield, increasing it from two bags of rice to seven. Now she sells the surplus and uses the money she makes to improve her quality of life.

“I have built my own house using the money I got from selling rice,” said Msoga, who is in the final stages of installing electricity in her new home.

“We are aiming to work together with local populations in Tanzania on how best they can identify crop varieties, which are suitable for drier circumstances,” FAO’s Tanzania representative Diana Tempelman told IPS.

She explained that FAO was also promoting conservation agriculture in Tanzania in order to reduce carbon emissions and increase carbon sequestration in the soil.

“Conservation agriculture is a very important technique to reduce the impact of climate change since it reduces the need for weeding and breeding,” she observed.

Conservation agriculture is a resource-efficient crop production practice involving minimum or even zero mechanical disturbance of the soil, keeping the soil covered at all times and using diversified crop rotation. In addition, the use of pesticides is reduced or avoided and biological control is encouraged.

The FAO project has, according to Henry Mahoo, a professor of agricultural engineering majoring in soil and water conservation at SUA, helped farmers in this village to adapt to changing conditions. A baseline survey conducted by SUA in February 2012 indicated that 95.5 percent of 2,688 farmers in Kiroka were aware of the changes in climate.

“With SRI production [a farmer’s yield] can increase by four times. Last year, we had a farmer who produced 11.6 tonnes per hectare,” Mahoo told IPS.

Mahoo, who is also the soil and water management coordinator on this project, explained that areas in central and southern Tanzania that now receive rainfall would be arid within 50 years.

“We need to prepare for this future scenario,” said Mahoo.

Kigadu is using multiple methods to deter soil degradation that he learned through the training, which include the digging of contour ridges and terraces to protect crops from soil erosion. This season he harvested over 50 bags of rice per hectare after using SRI.

“Despite the bad weather, my income has increased a lot since I started practicing these techniques. I can now pay for my children’s fees and foot their medical bills,” the father of four told IPS.

And Msoga appears confident that despite the reduced rainfall she will be able to care for her family.

“I am now planning to start a poultry farm to diversify my income,” she said.