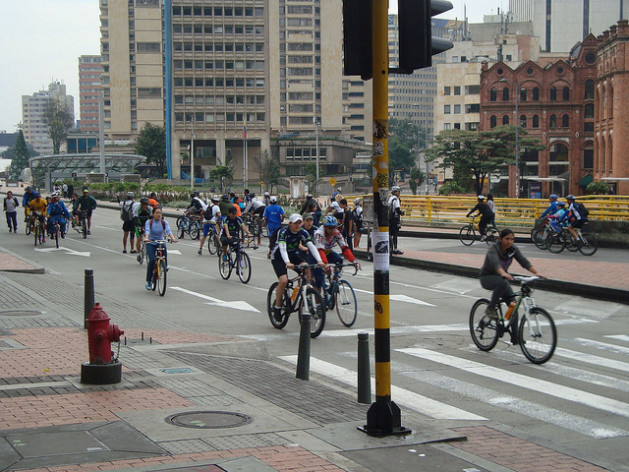 Bogotá is famous for its vast network of bike lanes. Credit: Helda Martínez/IPS

CARACAS, Dec 17 2013 (IPS) - “I ride 43 km a day and I love it,” said Carlos Cantor in Bogotá, Colombia. “Five years ago I switched my car for a bike,” explained Tomás Fuenzalida from Santiago, Chile.

They are both part of the burgeoning growth of cycling as a transport solution in Latin America.

But in the second-most urbanised region in the world, public sentiment towards bicycles is mixed, with some seeing them as a symbol of low socioeconomic status, says the “Biciciudades 2013” study by the Inter-American Development Bank (IDB) with regard to the expansion of this sustainable means of transport in large and medium-sized cities in the region.

The report, based on surveys and commissioned by the IDB’s Emerging and Sustainable Cities Initiative, found that between 0.4 and 10 percent of the population in the region use a bicycle as their main means of transportation.

Among the cities studied, Cochabamba in Bolivia heads the list, with 10 percent of the population depending on the bicycle. It is followed by La Paz, Bolivia, and Asunción, the Paraguayan capital, with five percent. All of these are intermediate cities with populations between 100,000 and two million people.

Among the big cities, in Santiago and Mexico City, three percent of the population use bicycles as their main means of transport, followed by Buenos Aires, the capital of Argentina, and Bogotá, with two percent.

Bogotá is known as a world leader in bike paths, with 376 km of “ciclorutas” or dedicated lanes – one of the most extensive networks in the world – and 120 km of recreational paths. In addition, car traffic is cut on some streets on Sundays and holidays.

Cantor, a 58-year-old communications specialist, took a break from his daily ride to tell Tierramérica about his experience cycling in the city. “You can go fast, because there’s no traffic; on some stretches I even enjoy the greenery and the quiet,” he said. “There’s a lot of solidarity, and you make friends.”

The Secretariat of Mobility of the Capital District estimates that in Bogotá, a city of around eight million people, local residents make about 450,000 bike trips a day. The largest group of bicycle users are manual labourers and factory workers, followed by students from lower-income families.

The recreational bike paths date back to 1974 and are used by an average of one million people every Sunday.

“I love the [recreational] bike paths, I use them every Sunday,” law student Carolina Mejía told Tierramérica. “But I don’t use the ciclorutas, because many of them havent’ been completed yet, and there are stretches that you have to share with cars and buses, and that scares me. Also, it’s not safe.”

Cantor agreed that there are safety concerns: “Every day bicycles are stolen, and there’s a brisk trade in stolen bicycles. In a question of seconds they change the colour with a spray can and your bike disappears.” But he said “people learn to use less pretentious bikes, and they put marks on them so it’s harder to sell them underground.”

Fuenzalida, 44, swapped his car for a bike in the Chilean capital “for my health,” because “you get exercise without paying a single peso in the gym” and because “it is much nicer to ride a bike than to take the subway, for example.”

The public relations specialist not only pedals to work, but also uses the bike to take his kids to school, go to meetings, or visit family members.

For people like him, the Santiago city government is implementing a “master plan” to extend bike lanes to a total of 933 km. The city currently has 215 km of bike lanes, while there are 130 km of paths in adjacent rural municipalities.

Greater Santiago is home to over five million people.

“This is one of the keys to increasing the use of bicycles, and for the city and residents of Santiago to see the benefits in the easing of traffic congestion and for health and the environment,” the Chilean government’s spokesperson Cecilia Pérez told Tierramérica.

The mayor of the Santiago metropolitan area, Juan Antonio Peribonio, told Tierramérica that the plan would be ready in 2022 and that lanes were being built to connect the existing paths. To that will be added a public system to lend out bicycles, in order to promote cycling.

But not everything is positive for cyclists. “Sometimes pedestrians, taxi drivers or car drivers insult me, they call me stupid,” said Laurie Fachaux, a 28-year-old French journalist who has lived in Chile for a few months. “They should get used to the fact that I have a right to be on the streets just like they do.”

Antonia Larraín, 37, believes that part of the problem is the lack of regulations protecting cyclists. “If an accident happens, there is total impunity,” said the psychologist, who pedals 13 km a day to and from work.

Enrique Rojas, 50, who has driven a taxi for 30 years in Santiago, reflected the other side of the coin. “Cyclists are careless, they wind in and out of the cars and don’t respect traffic signals; I have often almost hit one of them because they didn’t stop for a red light or because they were riding at night without any light,” he commented to Tierramérica.

“Cyclists should also have to take out a permit, and bicycles should have licence plates. They shouldn’t just be able to get on their bikes and not worry about anything – they leave their safety in the hands of others,” he complained.

But bicycle use is growing nonetheless, like in greater Mexico City, which has a population of around 20 million.

“It has been a relatively short process,” said Xavier Treviño, director of the Mexican office of the Institute for Transportation and Development Policy (ITDP). “The greatest success has been turning cycling into an alternative means of transport, and the main strength has been promotion of cycling,” he told Tierramérica.

The most visible symbol of cycling in the Mexican capital is the Ecobici Individual Transportation System, which since its launch in 2010 has drawn 87,000 users of 4,000 bicycles at 275 stations along 22 km of paths. Users register and pay 31 dollars a year.

Mexico City also has 90 km of separated and non-separated bike lanes. “Systems like Ecobici provide incentives for continued growth. It’s positive inertia. But infrastructure is lacking. All main roads should have infrastructure for bicycles,” Treviño said.

According to Ecociudades 2013, nearly all of the 18 intermediate and six large cities studied have bike lanes, with the exception of Asunción, Paraguay and Manizales, Colombia.

But only Bogotá, Buenos Aires, Mexico City, Asunción, La Paz and Montevideo – the capital of Uruguay – have regulations for urban cycling, as Rojas, the taxi driver, was calling for.