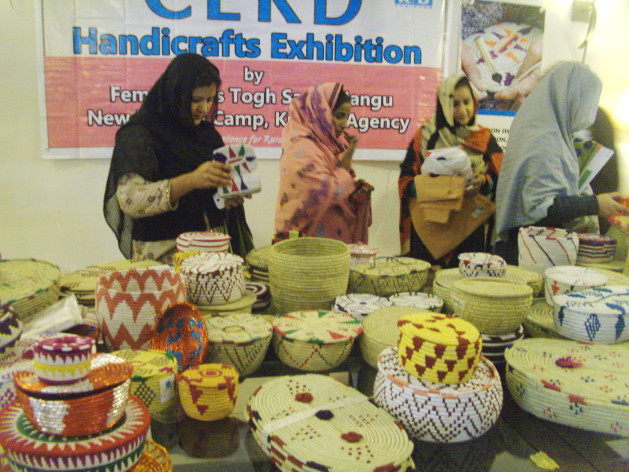 PESHAWAR, Dec 27 2013 (IPS) - Farhat Bibi, 43, was left to fend for her three young sons after her husband was killed in a bomb attack in Pakistan’s Federally Administered Tribal Areas (FATA) three years ago. A few days later, she landed at a camp for people displaced by violence. “The camp proved to be a blessing in disguise,” she says.

“It helped me learn skills and now I earn enough to buy clothes, food and fulfil the other needs of my children,” she recalls. She embroiders clothes and makes cushions, bags, wicker baskets, bracelets and other ornaments, earning around 150 dollars a month.

“I am also teaching these skills to other tribal women,” Farhat Bibi tells IPS.

The works of 100 displaced women like her were showcased at an exhibition here titled ‘Hunnarmande Guthey’ (skilful fingers). The colourful array of products on display belied the tragic past of the hands that made them.

Most of the women displaced from Orakzai Agency due to military action have lost their men and desperately need help."

The show was organised by the NGO Centre of Excellence for Rural  Development (CERD) in collaboration with the United Nations High Commissioner for Refugees (UNHCR). It presented handicrafts made by women from Kurram Agency in FATA who now live at the New Durrani Camp, home to 29,607 displaced families.

Violence has played out in FATA, bordering Afghanistan, ever since Taliban militants moved there after the fall of their government in Kabul in 2001. As a frontline ally of the U.S. in the war on terror, Pakistan has carried out military operations there.

Caught in the conflict, many FATA residents have fled to the adjacent Khyber Pakhtunkhwa province.

“We have been imparting training to 200 women every month in Hangu district of Khyber Pakhtunkhwa. Most of the women displaced from Orakzai Agency due to military action have lost their men and desperately need help,” Islam says.

He says women widowed by the conflict in FATA are the main beneficiaries of their UNHCR-sponsored endeavour. “We hold exhibitions every month to seek markets for these handicrafts which depict the skill and creativity of displaced FATA women,” he tells IPS.

Visitors to these shows are left marvelling at the creativity and grit of these women. Most of them are illiterate. Many of them were worried and depressed when they arrived at the camps, but they have learnt to look ahead.

Jamila Bibi, a 33-year-old woman from North Waziristan Agency, is one of them. She was devastated when her father was killed by a stray bullet. But the camp gave her courage.

She learnt embroidery, sewing and other skills and now supports her two sisters, a brother and a widowed mother. Sitting at a stall displaying her wicker baskets and trays, Jamila Bibi says had she not come to the camp, she would have been begging on the streets.

“I supply handicrafts to a nearby market. It has brought respectability to our lives as we are no longer dependent on charity and handouts by NGOs,” says Jamila Bibi.

Saeeda Gul, a CERD trainer, says the displaced women are trained before being provided raw materials.

“They come to three community centres near the camps where they learn to make things with wicker,” says Gul. “The women are very happy with their newly acquired skills because it helps them earn a living in a decent way,” she says.

Most of the women start from scratch, picking up the skills at the community centres.

Shukria Khan, a trainer, says “We just help them make the products in a more professional way and give them three months of training, besides raw materials.” The women are required to be at the community centre for four hours every day.

And the efforts don’t go unrewarded.

Aziz-ur-Rehman, a local businessman, says he displays the handicrafts at his showroom. “The items reflect the creativity and skills of tribal women and mostly manage to find buyers,” he tells IPS.

It is heartening to see that these women haven’t given up despite the harsh reality of their lives, he says. “The training has brought dignity to their lives. They are more empowered now.”

Buyers lap up these handicrafts because they are high on aesthetics and are inexpensive, he says. “Some items like handmade clothes also sell out fast.”

Kashmala Shah, a tribal woman from Kurram Agency who benefited from the programme, has now opened her own centre where she is training 30 women.

Shah says the displaced women now hope for a better future for themselves and their families. She tells IPS, “I lost my father and brother in the conflict but that doesn’t mean I should sit idle and wait for charity. It is a big opportunity and we are seizing it.”