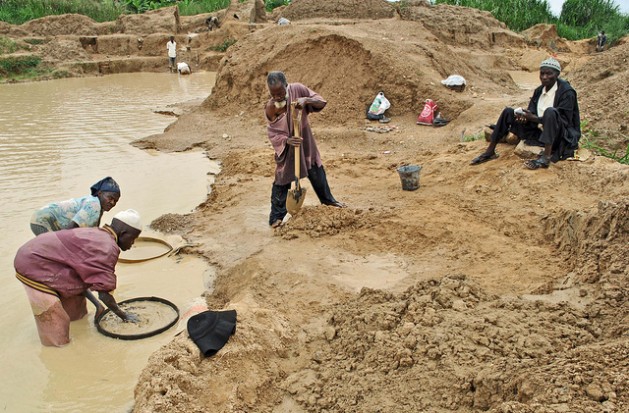 Artisanal diamond miners at work in the alluvial diamond mines around the eastern town of Koidu, Sierra Leone. While the continent is rich in mineral and oil wealth, Africa’s majority may have to wait a long time before they benefit from this. Credit: Tommy Trenchard/IPS

NAIROBI/HARARE, Jan 17 2014 (IPS) - With its two-trillion-dollar economy, recent discoveries of billions of dollars worth of minerals and oil, and the number of investment opportunities it has to offer global players, Africa is slowly shedding its image as a development burden.

“While global direct investment has shown some decline, dropping by 18 percent in 2012, in Africa foreign direct investment rose by five percent,” Ken Ogwang, an economic expert affiliated with the Kenya Private Sector Alliance (KEPSA), which has a membership of over 60 businesses, told IPS.

“Underhand dealings in the mining of diamonds and other rich minerals here have fuelled poverty.” -- economic analyst, Jameson Gatawa

Since 2012, Kenya has made a series of mineral discoveries, including unearthing 62.4 billion dollars worth of Niobium – a rare earth deposit. The discovery in Kenya’s Kwale County has made the area among the world’s top five rare earth deposits sites, and allows Kenya to enter a market that has long been dominated by China.

But Kenya, East Africa’s economic powerhouse, is not the only African nation that has made fresh mineral discoveries.

“The recent boom in new mining discoveries in countries such as Niger, Sierra Leone and Zambia will attract billions in foreign direct investments. Other countries like Mozambique, Tanzania and Uganda will similarly attract billions due to petroleum discoveries there,” Antony Mokaya of the Kenya Land Alliance, a local umbrella network of NGOs and individuals working on land reforms, told IPS.

Ogwang predicts that these discoveries will soon see African countries dominating the list of the 15 fastest-growing economies in the world.

“More African countries, Kenya being a model example in East Africa, now favour a market-based economy, which is highly competitive and the most liberal economic system.

“In this system, market trends are driven by supply and demand with very few restrictions on who the actors are. [It is] a favourable environment for foreign investors,” he said, referring to the local mobile phone industry, which has been dominated by foreign investors because of its favourable regulatory policies.

“As a result, growth in this sector is phenomenal. In the first 11 months of 2013, Kenya’s mobile phone money transactions were 19.5 billion dollars, which is more than the country’s current 18.4-billion-dollar national budget.”

Ogwang says that even more importantly, African countries are increasingly strengthening their partnerships with the East.

Statistics by the Africa Economic Outlook, which provides comprehensive data on Africa economies, show that China is the largest destination for African exports, accounting for a quarter of all exports.

Trade with Brazil, Russia, India and China – the economic bloc referred to as BRICs – now accounts for 36 percent or 144 billion dollars of Africa’s exports, up from only nine percent in 2002.

In comparison, Africa’s trade with the European Union and the United States combined totals 148 billion dollars.

But Terry Mutsvanga, director of the Coalition Against Corruption, an anti-corruption lobby group in Zimbabwe, cautioned that Africa will first have to rein in its corrupt politicians before its resources can enrich its own people.

According to the World Bank, some of the world’s poorest people live in Africa, with one out of two Africans living in extreme poverty.

“Without Africa dealing with the cancer of political corruption blighting the continent and robbing it of revenue from mineral resources through corrupt politicians receiving bribes from investors … the continent shall [continue to have] the worst poverty levels globally,” Mutsvanga told IPS.

“Underhanded dealings in the mining of diamonds and other rich minerals here have fuelled poverty. The rich are getting richer with the poor becoming poorer,” Gatawa told IPS.

For 54-year-old Sarudzai Mutavara, a widow who lives in the midst of Zimbabwe’s Marange diamond fields, poverty remains a daily reality.

Zimbabwe is one of the world’s top 10 diamond producers. But six out of every 10 households in Zimbabwe, a country of about 13 million people, are living in dire poverty. This is according to a 2013 poverty assessment report by the Zimbabwe National Statistics Agency.

“Here in Marange, the diamond wealth has not [helped] in any way to change our lives for the better, but rather for the worse as we have strayed further into poverty,” Mutavara told IPS.

The Democratic Republic of Congo (DRC) is another African country rich in diamonds, with its mineral wealth estimated in the trillions of dollars. But according to the United Nations, about 75 percent of its people live below the poverty line.

More than half of these have no access to drinking water or to basic healthcare. Three out of every 10 children are poorly nourished, with up to 20 percent of them predicted to die by the age of five.

While Ogwang says Africa’s best economic years are yet to come, it remains to be seen if the billions of dollars Africa has in natural resources will trickle down to people like Mutavara.