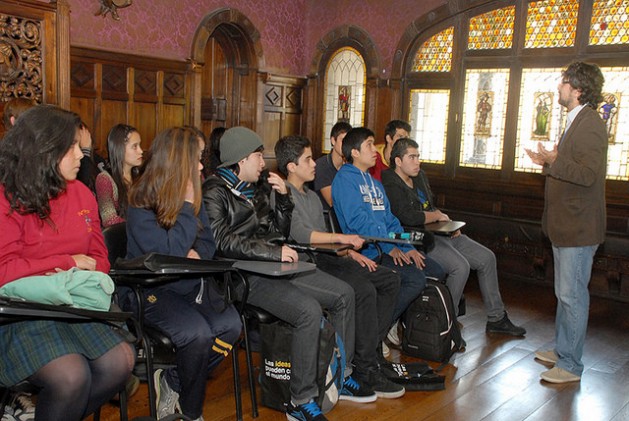 High school students attend classes and talks to get a look inside a higher education centre, at the Alberto Hurtado University in Santiago. Credit: Marianela Jarroud/IPS

SANTIAGO, Jan 30 2014 (IPS) - For 14-year-old Isadora Riquelme and thousands of other Chilean teenagers, the chance of getting the university education they want depends on the reforms that Michelle Bachelet has promised to undertake when she takes office as president again in March.

Education will also be the measure of Bachelet’s relationship with the country’s social base. Experts and those with a role in education say that it will not be sufficient to establish free higher education; the deep divisions in the system, from pre-school onward, need to be tackled.

Students have already convened a march demanding reform for Mar. 22, 11 days after Bachelet takes the oath of office for her second four-year term, indicating the intense pressure they will be putting on the socialist president from the outset.

Riquelme starts in high school at the end of February 2014. She wants to study languages or music at university, and she thinks that education should be free for all students, but she is sceptical that this will be achieved and that she will benefit from it.

“I don’t think [the authorities] will be able to carry it off,” she told IPS.

“Ideally, universities would be completely free because then we would have easier access to studying. At present there are a lot of kids who aren’t studying because they lack money,” she said. For her part, she says, she hopes to “get a scholarship.”

Under the present system, her parents, both professionals but neither of whom have steady jobs, would have to pay at least 1,200 dollars a month for their daughter’s university fees.

Education protests in Chile began in 2006, at the start of Bachelet’s first term (2006-2010). It was called the “Penguin Revolution” because of the black-and-white uniforms of the high school students who were demanding better primary and secondary education and recentralisation of the public school system.

Five years later, university students demanded quality, free, public higher education in a wide-ranging movement that brought nearly a million people out on to the streets.

The protest showed the true face of this country of 17 million people, where the economy has grown at an annual rate of six percent in recent years, yet is at the same time one of the most unequal nations in the world.

Nearly three million Chileans have to live on less than two dollars a day, and another million have incomes of less than one dollar a day. In contrast, the richest one percent collect close to 30.5 percent of the country’s total income, according to figures from Fundación Sol, a think tank.

In 1981, the military dictatorship of the late Augusto Pinochet (1973-1990) cut state education and handed control of schools to the municipalities. That year, 78 percent of enrolment was in public schools, and the rest in the private sector.

In 1990, when democracy returned, municipal enrolments were down to 57.8 percent, and in 2012 they were 38 percent. The cause was the rapid deterioration of the quality of public education, which led to the establishment of a mixed system, with contributions from the municipalities and from parents, creating what are known as private subsidised schools.

The urgent need to reduce the enormous inequality promoted by the dictatorship’s education system and the pressure from students led Bachelet to establish education reform as the key tenet of her government programme, in order to end excessive profit, improve quality, stop social segregation in schools and make substantial progress towards universal free education.

The estimated cost of the reform will be between 3.9 and 5.2 billion dollars, equivalent to 1.5 to two percent of GDP, and its goal is to advance gradually towards universally free higher education over six years.

Eduardo García Huidobro, who chaired the Presidential Advisory Committee for the Quality of Education that delivered its final report in 2006, told IPS that the new government will face “two pressing needs.”

“There are ‘political-political’ needs, and the educational field may turn ungovernable if it is not resolved rapidly, and ‘political-technical’ needs, which may be less high profile, but are of substantial importance,” he said.

García Huidobro, an academic at Alberto Hurtado University, said that among the predominantly political issues is free higher education, “which is important because of its democratising effect, but is also a key to the credibility of the new government among social movements.”

Among the “political-technical” issues, “the most important is the teaching profession, because talk about improving the quality of education is not credible without substantial improvement in pay and working conditions for teachers.”

According to García Huidobro, these needs are followed by “demunicipalisation” and regulation of private subsidised schools, so that students have the same opportunities, whether they live in a poor municipality or neighbourhood, or in a well-off one.

In Chile there are 25 traditional universities, both public and prívate, that belong to the Council of Rectors of Chilean Universities (CRUCH), as well as 31 other private higher education facilities.

In order to attend a CRUCH university, students must pass a selection test on knowledge acquired in secondary school.

“This is where the essence of segregation in Chile rears its head. What use is a free university if you can’t get into it?” asked Mauricio Weibel, a journalist and expert on education.

Weibel, who is the head of the Escuela Latinoamericana de Estudios de Postgrado (Latin American Postgraduate School) at ARCIS University, said the greatest challenge is to improve the quality of primary and secondary education, where inequality begins.

“Nowadays in Chile there are poor schools for the poor and rich schools for the rich. And the difference between them is not just infrastructure, but above all the quality of the teachers and of the education given,” he said.

A study by the University of Valparaíso showed that traditional universities recruited 71 percent of students with the highest scores in the selection test for 2014 admissions. Only 12 public high schools achieved an average of over 600 points, the minimum score required for entrance to some universities.

García Huidobro admitted that the reforms in higher education are insufficient, “but they are very important,” he said.

“It is true that basic and middle education also need to be improved a great deal, especially in the public sector, but it is also true that many talented young people today are discouraged (from going to university) by the fees and the debts they incur,” he said.

In Weibel’s view, a recently implemented system of grade ranking as a measure of quality, equity and inclusion in university access, is a major step forward that allows the best students from every school to attend university.

The future education minister, Nicolás Eyzaguirre, who was a finance minister in the government of socialist president Ricardo Lagos (2000-2006) and a former head of the International Monetary Fund’s Western Hemisphere Department (2008-2012), will now have to take up this challenge.

Eyzaguirre has said that he will dialogue with all the sectors involved, because “that is where the destiny of Chile lies,” but he has already come under fire for his previous insistence on the primacy of economic factors.