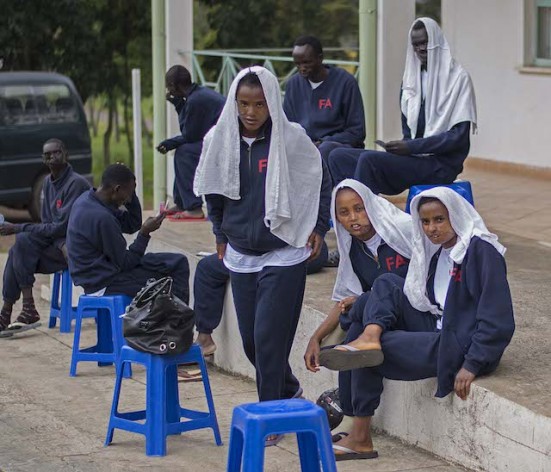 Yenenesh Yigsaw (right) recovers from her latest reconstructive surgery with other Noma patients at a recuperation centre outside of Addis Ababa, Ethiopia’s capital. Credit: Nick Ashdown/IPS

ADDIS ABABA, Jan 22 2014 (IPS) - It’s hard to tell if Gelegay Tsegaye is smiling, since a flap of skin covers half his mouth, but his eyes crinkle when he talks and his muffled voice rings with an upbeat cadence. He’s sitting in a special ward of the Korean Hospital in Addis Ababa, Ethiopia’s most modern healthcare facility.

Gelegay’s affability is notable because of what he’s gone through. The 34-year-old farmer from a village in Ethiopia’s Gojam region is a survivor of Noma, a rare flesh-eating infection that rots away the face.

When he was just two years old, Gelegay noticed black spots forming on his nose, which quickly spread downwards to his mouth. He received rudimentary treatment, but the diseased part of his face fell off.

Noma is only found amongst children (primary incidence is between the ages of one and four) in the poorest regions of the world, such as rural parts of sub-Saharan Africa and India. The World Health Organisation estimates there are 140,000 new cases globally each year.

Noma’s cause is abject poverty. According to the U.S. Government’s Global Hunger and Food Security Initiative, “Ethiopia is among the poorest countries in the world, with a per capita GDP of 471 dollars.” About 29.6 percent of this Horn of Africa’s 90 million people still live below the poverty line.

Noma only occurs in the poorest villages, where adequate healthcare is non-existent. And there are no official figures on the prevalence of the disease in Ethiopia. Malnourished children with a weakened immune system caused by a viral infection such as measles or malaria are prone to Noma when living in conditions of poor hygiene.

The infection can occur when a child living in poverty suffers a cut to the gums. The cut becomes infected and Noma quickly spreads across the face. Within 10 days, 85 percent of its victims are dead.

The survivors may not feel that lucky though, since they’re left with large portions of their face missing. The affliction then becomes social, not medical.

After Gelegay’s face healed, it wasn’t painful, but the disfigurement left him uncomfortable around people. “I used to be very embarrassed to mix with people. They just pushed me away,” he tells IPS.

Here, Noma survivors don’t go to school. They’re usually isolated by their community, their families, or themselves because they don’t feel comfortable around other people.

Yenenesh Yigsaw is a 19-year-old girl from Ethiopia’s Tigray region who also had Noma when she was two.

Yenenesh didn’t realise she was disfigured until she went to school, and soon stopped going.

“It was my decision. I hated being different from all my friends. I always had to walk around with my face covered, and was very embarrassed,” she tells IPS.

“Usually, they’ll just stay at home. They don’t even seek traditional treatment,” he tells IPS, adding that many people thought of the condition as a punishment from God and not a medical problem.

A few years ago, Gelegay and Yenenesh heard about Facing Africa, a charity group based in the United Kingdom that gives Noma survivors in Ethiopia free reconstructive surgeries.

Fifteen years ago, Englishman Chris Lawrence started the charity so he could help people in a way that he could see with his own eyes.

Lawrence describes his response to seeing Noma for the first time as “sheer anger.”

“Anger that a disease like this, which is caused by malnutrition and extreme poverty, should exist in the twenty-first century,” he tells IPS.

“Noma is not a disease that needs to exist. If it’s caught in the early stages it’s very easily cured.” Simple antibiotics stop the infection dead in its tracks.

“Either they die, or by the time a doctor sees them, half their face is gone,” Lawrence says.

Most people in rural Ethiopia lack local access to antibiotics, and there are no specific government initiatives for tackling Noma.

The infection can only be eliminated by massive upgrades to rural healthcare, sanitation, and nutrition, which can only be done by the government.

However, experts say rural healthcare has significantly improved since the government launched the Health Extension Programme in 2004/2005.

“This programme has massively increased access to the most basic of health services,” Garth Van’t Hul, country director at the charity group CARE Ethiopia, tells IPS. “It was a major contributor in decreasing mortality rates of under-five-year-olds.”

Gelegay has had three procedures to cover up a cavern in his face enveloping his nose and upper mouth, and Yenenesh had two on her cheek.

They both say life has improved since the procedures. Yenenesh has more friends, and people treat her better now.

Gelegay says meeting other patients with Noma has made him feel a lot better.

“At first I was very surprised because I thought I was the only one,” he says.