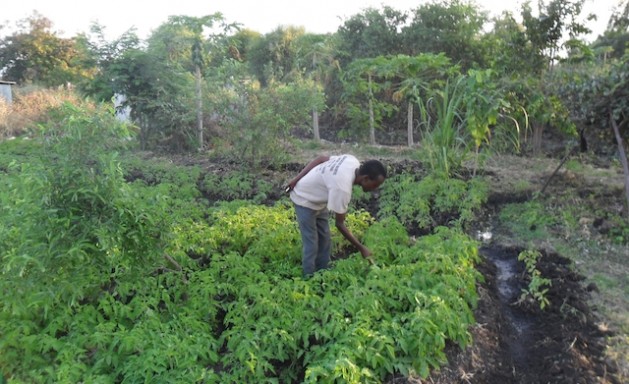 Dima Wario from Rupa, a village in Merti division, northern Kenya, has moved away from pastoralism and become a farmer in the country’s semi-arid region. Credit: Noor Ali/IPS

ISIOLO COUNTY, Kenya, Apr 9 2014 (IPS) - For more than a decade Dima Wario from Rupa, a village in Merti division, northern Kenya, escaped death and watched helplessly as many in his community died in a spate of fatal clashes over receding resources.

“We were attacked from all sides, as different communities battled over water points and pasture. I survived many attacks and raids, lost almost all my animals to raids for them to only be wiped out by drought four years ago,” Wario told IPS.

Merti division lies in Isiolo County, in Kenya’s Eastern Province which stretches all the way to the country’s northern border with Ethiopia.

Kenya’s underdeveloped, vast and semi-arid north is plagued by prolonged and recurrent violent conflicts over resources, deadly cattle raids, and increased incidents of natural disasters like droughts and floods.

The African Development Bank’s Kenya’s Country Strategy Paper 2014 to 2018 indicates the region is the poorest in the country, with more than 74 percent of the population living in a desperate state of poverty.

Although traditionally communities in Kenya’s arid regions have been pastoralists, over the years “the impacts of climate change have combined with other environmental, economic and political factors to create a situation of increasing vulnerability for poor and marginalised households,” says a report by CARE International.

But Wario and his household can no longer be classified as vulnerable. He’s moved away from the livelihood of his forefathers and is currently one of a new generation of successful crop farmers in this far-flung, remote village in Merti division some 300 km north of the nearest established town of Isiolo.

His only regret is that he took so long to switch from pastoralism.

His first wife, Amina Wario, told IPS this change was thanks to the Merti Integrated Development Programme (MIDP), an NGO in the region which educates pastoralists and livestock owners on climate change resilience and sustainable livelihoods.

“We grow enough food for our family, relatives, traders and local residents. This farm produces watermelons, paw paws, onions, tomatoes, maize, and tobacco for us for sell to those with livestock and earn an average profit of Ksh 50,000 [581 dollars] a month,” Amina Wario told IPS.

The Wario family farm is partitioned by trenches of flowing water from the nearby Ewaso Ng’iro River, which is drawn by a pump.

Five years ago, the MIDP began teaching 200 families who had lost all their livestock to drought about alternative livelihoods.

Now, more than 2,000 families across Merti division, a region where people are predominantly pastoralists, are part of the programme.

Khadija Shade, chairperson of the Bismillahi Women’s self-help group, said the community’s departure from pastoralism has empowered and emancipated people in Bisan Biliku.

Women are now innovators and the main breadwinners in their families, she said. The women’s group grows a wide variety of crops and also purchases livestock from locals, all of which is sold to a chain of clients in Isiolo County, central Kenya and the country’s capital, Nairobi.

She also runs an exclusive shop that sells women’s and children’s clothes, and perfumes.

“[Now] we have enough money but nowhere to keep the money safe. We need banking facilities. At the moment we travel far to use mobile phone banking,” she added. This is because there is no mobile network coverage in Bisan Biliku and locals are forced to travel to an area with coverage.

A respected clan elder in Bisan Biliku, who requested not to be identified, told IPS that after attending a series of seminars by the MIDP a few years ago, he sold some of his livestock, bought a truck and built two house in Isiolo town, the capital of Isiolo County. He rents out the houses and earns an additional income.

“From the seminars I learnt how to reduce risks and increase my income and lead a better life. Now I am obviously not at risk of being a poor man,” he said.

Abdullahi Jillo Shade from the MIDP told IPS that the project “has been embraced by many families in Merti [town], and the neighbouring settlements of Bisan Bilku, Mrara and Bulesa and Korbesa.”

“Our people are proud farmers and traders. They have changed the tidal wave. These days we have more trucks transporting food to the market in Isiolo town than trucks with relief food…” he said.

Others too are adapting to the changing climate in their own way.

However, money has now been set aside to assist communities.

“The Isiolo south constituency development fund committee has identified, prioritised and allocated funds to address food insecurity and disaster management, and to support families rendered poor by past drought, floods and conflicts,” he told IPS.

The constituency fund, he said, helped start the Malkadaka irrigation scheme on 400 hectares of land in Isiolo south in August. It supports 200 families whose livestock were wiped out by successive droughts and floods.

Yussuf Godana from the Waso River Users Empowerment Platform, a community-based organisation, told IPS that locals suffered the most during the recurrent droughts but said education has helped people accept that erratic and harsh weather trends are not a curse but a global crisis.

He said thanks to the community diversifying its livelihood and the reduced conflicts over resources, “this whole place is now covered with a green carpet of crops – it’s an oasis.”

Partners For Resilience (PFR) is an alliance of various associations including Netherlands Red Cross (lead agency) and CARE Netherlands. It is working in partnership with Kenya to empower communities, with a focus on educating people about disaster prevention and management, and strengthening the resilience of at-risk communities.

Abdi Malik, a PFR official working with the Kenya Red Cross, told IPS that the various adaptation programmes in the region have created relief-free food zones and recorded significant decreases in families seeking food and assistance with school fees.

These programmes, said Malik, have also changed how the Kenya Red Cross engages with the local communities. Now people only visit their office to seek support for various projects, unlike in the past when they camped outside for days waiting for relief food.

Amina Wario is optimistic that her family will never need aid again.

“Our family is now respected, from the proceeds from this farm we have constructed a house … and educated our children.

“Now have enough food. Relief food is forbidden in our house,” she said happily.