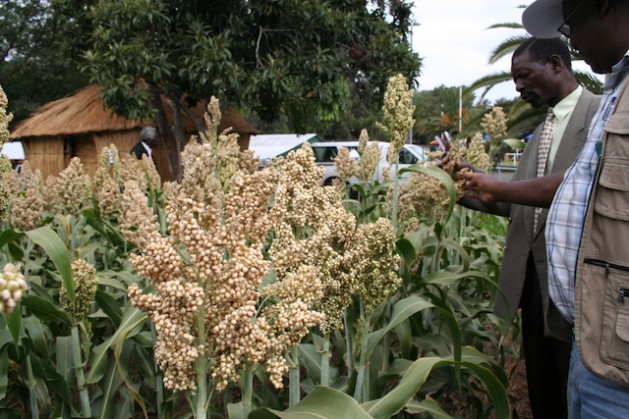 Agronomist Davison Masendeke shows a farmer in Bulawayo a variety of white sorghum, which is an ideal crop for arid areas. Credit: Busani Bafana/IPS

BULAWAYO, Zimbabwe, Apr 25 2014 (IPS) - There is urgent need to increase the proportion of climate finance for adaptation in Africa by increasing public sector budgets for agriculture and exploring partnerships with the private sector.

This is according to Sonja Vermeulen, head of research for Climate Change, Agriculture and Food Security (CCAFS), a research programme of the Consultative Group on International Agricultural Research (CGIAR).

CGIAR is set to spend close to one billion dollars in agriculture research in 2014. But Vermeulen says African agriculture needs more financing to help smallholder farmers, who produce most of the continent’s food, adapt to climate change.

The focus should be on increasing public sector budgets for agriculture and exploring partnerships with the private sector, beyond development finance, for countries that are now at the investment stage.

Financing for climate action and adaptation by developing countries has dogged the agenda of United Nations Framework Convention on Climate Change (UNFCCC) conferences and remains a hurdle to a binding climate change treaty.

Q: Climate change has huge implications for agriculture in Africa. What is the best way forward as Africa seems to have failed to secure concrete actions from the UNFCCC process?

A: In spite of the stalled UNFCCC talks, several African governments are collaborating with research institutions and development partners to explore options for tackling the climate change challenge.

These early actions revolve around pilots and testing of climate-smart agriculture or climate-resilient agriculture such as trailing market-based mechanisms for reducing emissions … and improving climate forecasting that helps farmers deal with climate extremes. The larger the scale of piloting, the more convincing it will be.

Q: Climate finance seems a bankrupt concept from the start. Now with the collapse of the European carbon markets, can agriculture in Africa succeed without funding?

For instance, since 2003 the Comprehensive Africa Agriculture Development Programme has been supporting countries with the implementation of their respective agricultural investment plans, and the importance of strengthening agricultural finance services to support the transformation of African agriculture has been noted.

In order to strengthen the performance and competitiveness of the continent’s agriculture sector, the focus should be on increasing public sector budgets for agriculture and exploring partnerships with the private sector, beyond development finance, for countries that are now at the investment stage.

Q: What concrete programmes has CGIAR implemented in Africa to help farmers become resilient in the face of climate change?

A: Recognising that drought is one of the major challenges facing Africa, CGIAR focuses on developing crop technologies that are suitable for drought conditions and tolerant to insect damage.

Q: How successful have these initiatives been?

A: The IRMA project has resulted in the release of more than 50 new cultivars, which are now grown on at least one million hectares in southern Africa.

By working in partnership with local communities and by replicating the poor conditions found in farmers’ fields, the approach was tailored to meet the needs of poor farmers who had not previously benefited from conventional breeding programmes.

At the same time, insect-resistant maize greatly increases farming efficiency since insect control is available for the cost of only the seed. In addition, research on developing resistant varieties provides 100- to 300-fold greater returns on investment than research to develop insecticides.

Another successful project is the Harnessing Opportunities for Productivity Enhancement for Sorghum and Millets project … [which] seeks to improve the livelihoods of at least 60,000 smallholder farm households in West and Central Africa and 50,000 in East and southern Africa, who depend on sorghum and millet for food and income.

Q: What of the challenges?

A: These projects have faced several challenges. The private sector has little incentive to provide seeds to smallholder farmers due to high transaction costs, and systems for the certification and distribution of seeds are poorly developed.

Furthermore, [government and non-government] extension has failed due to inadequate human resources…, while government and NGO [extension officers] stress lack of resources to mobilise communities, and poor communication with researchers leads to information distortion.

Q: What about CGIAR’s financial commitment to innovations in agriculture?