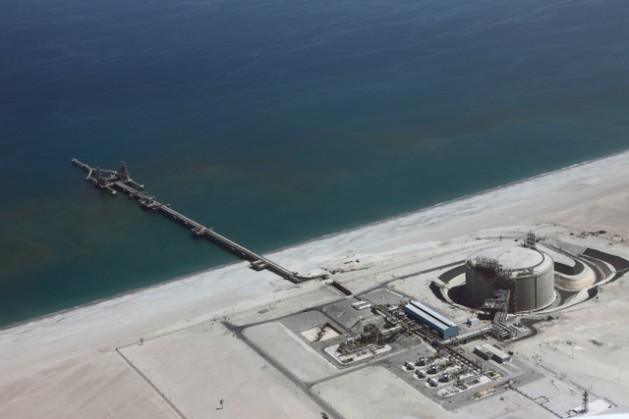 Aerial view of the Mejillones Liquefied Natural Gas (GNLM) regasification terminal in northern Chile, the biggest of its kind in Latin America and one of the biggest in the world. Credit: Courtesy of GNLM

Ten years later, a regasification plant which converts liquefied natural gas (LNG) back to natural gas in the port of Mejillones, 1,400 km north of Santiago, apparently goes a long way towards solving the energy problems in the north of the country, where water is scarce and where the mining industry is concentrated.

President Michelle Bachelet has expressed confidence that, along with renewable energies, natural gas will contribute to the diversification of Chile’s energy mix, and emphasised that “what we do or fail to do now will have consequences in the future.”

On May 14, Bachelet inaugurated an onshore storage tank at the Mejillones Liquefied Natural Gas (GNLM) regasification terminal, the biggest in Latin America and one of the biggest in the world.

French-Belgian power company GDF Suez holds a 63 percent share in the terminal and the rest is owned by the state-owned Corporación del Cobre de Chile (Codelco).

It was Bachelet , during her first term (2006-2010), who laid the first stone for the plant. And in February 2010 she was present to welcome the arrival of the first methane tanker.

Bachelet now inaugurated the huge storage tank with a gross capacity of 187,000 m3. It is a full containment tank with a nickel steel inner tank inside a pre-stressed concrete outer tank.

The CEO of GDF Suez, Gerard Mestrallet, said it was built to the highest safety standards, to withstand seismic activity and tsunamis.

The tank’s 501 elastomeric isolators enable it to withstand the stresses caused by a major earthquake, as well as sophisticated seismic monitoring and protection systems.

For four years, in the first stage of the project, the BW GDF Suez Brussels was moored on one side of the jetty in the bay and used as a floating storage unit when gas shipments came in.

The land tank’s capacity is equivalent to approximately 110 million m3 of standard natural gas after the regasification process. This is transported to clients, mainly mining companies, through the Nor Andino and GasAtacama pipelines.

It is the company’s clients that pay for importing the gas. The corporations that have signed contracts so far are the Anglo-Australian multinational BHP Billiton, Codelco and Generadora E-CL, a Chilean power company controlled by GDF Suez. 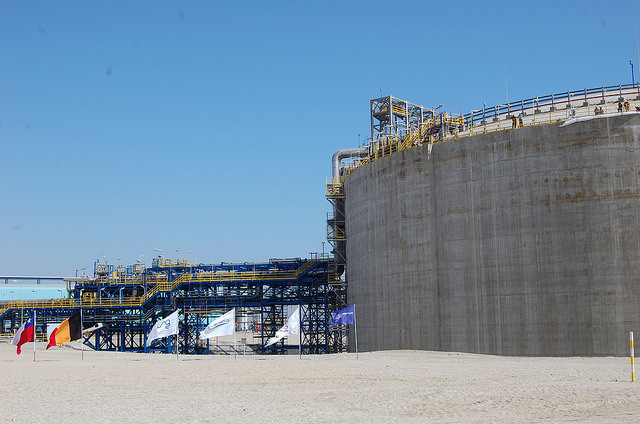 On May 15, Bachelet – who took office in March – presented her government’s energy agenda, which focuses heavily on clean energy sources as well as the use of LNG to replace diesel fuel and for industrial and household use as well.

The agenda proposes short-term measures to maximise the use of the country’s current electric power generation infrastructure and LNG terminals.

But the head of the Latin American Observatory on Environmental Conflicts (OLCA), Lucia Cuenca, said the government’s proposal should be looked at with a critical eye.

The country is making the mistake, she told Tierramérica, of not thinking about the high quality natural gas that Bolivia or Argentina could provide, but only about unconventional sources of natural gas. She was referring, for example, to shale gas, which is extracted from underground rocks by hydraulic fracturing or fracking.

“ Chile is preparing to incorporate this kind of gas and that has to be evaluated in a much broader manner,” Cuenca said.

Chile currently imports gas mainly from Trinidad and Tobago and Qatar. But the government will reportedly negotiate supplies of shale gas from the United States.

Cuenca added that, even though LNG emits fewer greenhouse gas emissions, “it’s still a fossil fuel, which means it does produce emissions.”

“LNG is considered a transitional fuel; in other words, it is a little better than coal, but it is not exactly the best option from the standpoint of clean energy,” he added.

In Chile, thermoelectric plants are run on three kinds of fuel: diesel, the most expensive and dirtiest; coal, which is also highly polluting, but abundant and cheap; and gas, which is the least polluting, but costs around 30 percent more than coal.

In 1991, a year after this country returned to democracy after the 1973-1990 military dictatorship of General Augusto Pinochet, the governments of Argentina and Chile signed an economic agreement that established the foundations for gas interconnection between the two countries.

But the late Néstor Kirchner, when he took office as president of Argentina in 2003, prioritised domestic supplies in the face of internal shortages of natural gas, which at the time only covered national demand.

The cuts in exports had a tremendous economic impact on Chile, because power companies were forced to use oil instead, whose international market price had soared.

At the time Argentina cut its gas exports, nearly 90 percent of industries in Santiago were using natural gas from Argentina, which also supplied much of the country’s natural gas pipeline network that serves households.

“The decision reached by Kirchner (2003-2007) was in line with Argentina’s political approach, which will always favour national interests; regardless of who is governing, they are prepared to assume the costs from the standpoint of the international cooperation agenda,” political scientist Francisca Quiroga told Tierramérica.

She said that after Argentina reduced its gas exports to Chile, a debate broke out in which many argued that Chile should not trust Argentina because it was a country that did not live up to its promises. But the political dividends Kirchner reaped outweighed any criticism from abroad, she added.

Quiroga said the question of energy “is a very touchy ideological and strategic issue and is important in debates on domestic policy.”

And in the current regional context, she added, “is it one of the most important issues on the multilateral agenda to address in terms of the challenges of the 21st century.”

In the meantime, Chile is planning the construction of a third LNG terminal in the south-central part of the country, with the participation of the state energy company ENAP.

Cuenca said it is a strategy that serves the large mining corporations that need cheap, abundant energy, because the aim is to offer lower prices on the domestic market.