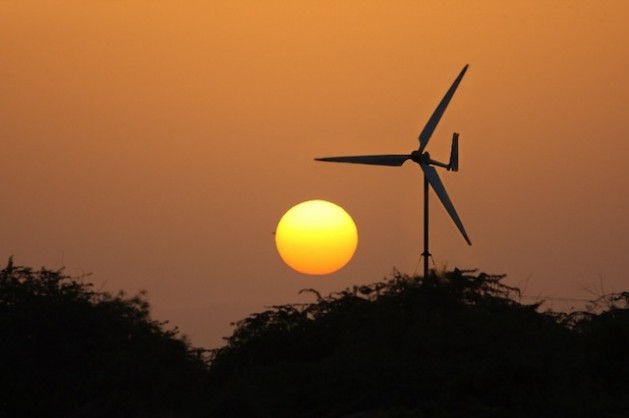 Estimates suggest that Pakistan can generate around 1,1000 megawatts of electricity through solar and wind sources. Credit: WWF-Pakistan

KARACHI/NEW DELHI, Jun 1 2014 (IPS) - Mukhtar Ali is one of the many Pakistanis who are furious at politicians and authorities for failing to provide citizens with a regular supply of electricity during the smouldering summer months.

Life for the 42-year-old shopkeeper in Karachi, Pakistan’s financial hub, becomes especially unbearable when his business suffers due to load-shedding (rolling power cuts), or when he tries to sleep at night without a fan to cool him.

“This has been going on for years now,” Mukhtar told IPS. “We have been promised on several occasions by previous governments and even the present one that the energy crisis will be resolved in their tenure. But so far, things remain the same. I cannot even express my anger towards such hypocrisy.”

“Pakistan has been [badly] impacted by extreme weather disasters due to climate change [...]. We will only be adding to the problem if we expanded the use of coal and other fossil fuels.” -- Umama Binte Azhar, a sustainability expert at Brunel University
The ongoing energy crisis is certainly one of the greatest challenges that Pakistan is facing. The current power shortage in the country has been estimated to be around 6,000 megawatts, with the industrial sector being hit the hardest due to the shortfall.

Since 2011, almost 70 percent of industries have either shut down or have outsourced their operations to countries like Malaysia and Bangladesh. The Economic Survey of Pakistan notes that during 2011-2012 around 4.8 billion dollars, or two percent of gross domestic product (GDP) was lost due to power outages.

As a result, after years of massive blackouts that have plagued the country and destroyed much of its industrial sector, energy-starved Pakistan is setting its eyes on a coal-fired future. Recent discoveries of massive ‘low’ and ‘low to medium’-quality coal reserves in the southern part of the country have led many to endorse the decision to compensate for the current energy deficit by setting up coal-fired power plants.

An economic and environmental nightmare

Regarded as the dirtiest of all fossil fuels, coal is considered one of the largest contributors of carbon emissions that are causing rapid climate change. Around the world, coal has been the cause of several social and environmental conflicts, and has resulted in massive human displacements in recent history.

Additionally, coal-related industries are responsible for creating water scarcity and food risks in countries where the use of water for energy is prioritised over agriculture and food production. This has led many experts and specialists in the energy and climate sectors to show reservations towards coal-fired power plants.

“Coal is exhaustive and an unsustainable resource for Pakistan,” Umama Binte Azhar, a sustainability expert at the London-based Brunel University, told IPS.

“Pakistan has been one of the worst impacted by extreme weather disasters due to climate change in recent years. We will only be adding to the problem if we expanded the use of coal and other fossil fuels.”

“Who is this development for? Who benefits? Who profits and who loses their livelihoods?” asks Vaishali Patil, an activist in the western Indian state of Maharashtra who is currently fighting coal in her own backyard.

She is one amongst many across the globe who is bearing witness to upheavals against coal and fossil fuels as a source of energy to power our future.

Largely lead by front line communities, these struggles are being fought on various grounds. With loss of land as a prime driver, impacts on water, livelihoods, health and environment are all reasons for growing unrest amongst people.

The past two to three decades have given us ample evidence of the detrimental impacts of existing plants and mines on various ecosystems. From the struggle to save the Appalachian Mountains in the United States, to protecting livelihoods of fisherfolk in India, to fighting corruption and land grabbing in the Mpumalanga province of South Africa – strong voices are coming together to challenge a common enemy that is coal.

With such conclusive evidence in front of us, to further invest and proliferate coal usage is a folly that could cost our future generations and us dearly.

Energy production through coal consumes huge quantities of water. A typical 660-MW coal power plant, for instance, requires up to three billion gallons of water annually for its cooling system. Imagine having several such coal plants set up in a country that is already facing severe droughts and water shortages; it is a daunting prospect.

Despite this, the recent discovery of coal reserves in the Thar Desert in Pakistan’s southern Sindh Province has sparked both domestic and international interest. For example, China is set to invest around 1.5 billion dollars in Thar Coal. Similarly, Burj Power, a UAE-based company, has signed a deal worth 700 million dollars to set up four coal plants at Port Qasim, near Karachi.

Many UK and Czech-based companies are also expected to make such investments in Pakistan for the same purpose. A recent agreement signed between the Pakistan government and the Asian Development Bank (ADB) stipulated that the latter would provide 900 million dollars worth of assistance to help Pakistan set up a power project in Jamshoro, a district of the Sindh province.

An estimated four coal plants are poised to become operational by 2016 at various points around the country to generate electricity. What is alarming about this plan is that running the plants will require coal to be imported in huge quantities from countries like Indonesia and South Africa since most coal deposits in Pakistan have low energy density.

The operation will be extremely costly, and will hold Pakistan hostage to imports and international markets for many years to come. Neighbouring India is learning this lesson the hard way, with high import prices of coal making thermal power plants economically infeasible without massive government bailouts and soaring energy prices to the end consumer.

Pakistan is not the only country with plans to exploit coal for energy. Developing countries around the world and primarily South Asia are fixated on the notion that coal is cheap and therefore a viable source of energy for growing the economy and fighting poverty.

With almost 450 coal-fired power plants proposed to come up in the region, India’s hunger for this dirty fuel is rising. But the truth is that a majority of these plants will likely fail to come into being, as the last few years have shown.

Domestic coal production has hit a plateau as poor mining and transport infrastructure, as well as corruption scandals, have crippled Coal India Limited (CIL), the world’s largest coal miner. Efforts are underway to import coal from countries like Indonesia and Australia but rising coal prices have put a spanner in the industry’s works.

Over 30 power plants went on a distress sale last year as enthusiastic entrepreneurs built coal plants in haste but were unable to run them owing to massive coal shortages. This has become a recurring theme in India that is pushing coal-financing institutions to completely rethink their investment strategy.

Bangladesh is another example of where coal is being looked at as the panacea for poverty. But the recent eruption of public dissent against the proposed 1,320-MW Rampal power plant in the southwestern Khulna district – which is known in Bangladesh as the gateway to the ecologically sensitive tidal forest area called the Sunderbans – shows that the industry will not have it easy.

As coal plants begin competing for people’s need for land and negatively impacting agriculture, health and livelihoods, opposition for them will only rise as witnessed in pockets across the subcontinent.

Sri Lanka is steadily increasing its coal dependence as it projects 70 percent of its energy by 2025 to come from coal but that growth is mired in complex geopolitics that questions the primary motive behind coal expansion: is it to satisfy the capital interests of a few or the energy needs of the masses?

The story in Pakistan could turn out to be the same, as coal prices continue to head northwards and international financial institutions like the World Bank and the ADB grow increasingly wary of their investments in this fossil fuel.

Solving the crisis with renewables

Among the available alternatives, renewable energy sources such as solar, wind, and biomass have vast potential in Pakistan. Despite their high installation costs, renewable energy systems incur far fewer operational and maintenance expenses, making them highly profitable in the long run.

Globally, the cost of renewables has decreased drastically. Considering that the prices for solar panels have fallen from five dollars/watt to less than a dollar per watt in just a few years, solar energy has proven to be an affordable and practical option for Pakistan, especially since the country falls under a sun belt.

The wind corridor at Gharo-Keti Bunder in coastal Sindh is another potential source of power generation waiting to be fully explored. It has the potential to generate about 11,000 megawatts of electricity, according to a report published by the Pakistan Meteorological Department.

Regrettably, “inadequate investments, power tariffs, and institutional constraints have resulted in the dismal situation where renewable sources are not being fully tapped,” Asad Mahmood, the technical manager at the Energy Conservation Fund (ECF), told IPS.

Experts say Pakistan can avoid the trap that rapidly emerging economies have fallen into, and instead draw up a blueprint for large-scale decentralised renewable energy deployment. In a rapidly changing climate, nothing less would be acceptable.