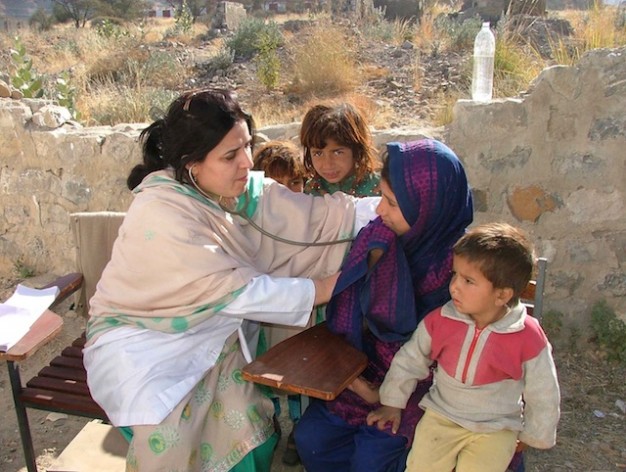 PESHAWAR, Pakistan, Jul 21 2014 (IPS) - Some fled on foot, others boarded trucks along with luggage, rations and cattle. Many were separated from families, or collapsed from exhaustion along the way. They don’t know where their next meal will come from, or how they will provide for their children.

In the vast refugee camps of the Khyber Pakhtunkhwa (KP) province, civilians who fled the Pakistan Army’s military offensive against the Taliban in the country’s northern Waziristan Agency now walk around in a state of delirious confusion.

Medical officials here say that almost all the 870,000 internally displaced people in KP are deeply traumatised by over a decade of war in the northern provinces, where they were caught in the crossfire between government forces and militants who crossed the border from Afghanistan into Pakistan’s Federally Administered Tribal Areas (FATA) in 2001.

“We examined about 300,000 patients at the psychiatry wards of the KP hospital in 2013; 200,000 of them belonged to FATA. This included 145,000 women and 55,000 children." -- Muhammad Wajid, a psychiatrist at the Khyber Pakhtunkhwa Teaching Hospital in Peshawar
Now, as the army conducts air raids on the 11,585-square-kilometre North Waziristan Agency in a determined bid to wipe out the Taliban, war-weary civilians are once again bearing the brunt of the conflict, forced to leave their ancestral homes and seek refuge in neighbouring KP where shelter, clean water, food and medical supplies are stretched thin.

IDPs have been streaming in since the military operation began on Jun. 15, reaching close to a million by mid-July, officials here say. So far, aid has come in the form of food rations and medical supplies for the wounded, as well as those left dehydrated by the scorching 45-degree heat.

But very little is being done to address the psychological trauma that affects nearly everyone in these camps.

“The displaced population has been living in rented houses or with relatives where they lack water, sanitation and food due to which they are facing water and food-borne ailments,” Consultant Psychiatrist Dr. Mian Iftikhar Hussain tells IPS. “But the main problems are psychological disorders, which are ‘unseen’.”

Sitting in front of the Iftikhar Psychiatric Hospital in Peshawar, capital of KP and 250 miles from the largest refugee camp in Bannu, 50-year-old Zarsheda Bibi tells IPS her entire family fled Waziristan, leaving everything behind.

“She doesn’t sleep properly because she dreams of her deceased grandson every night,” says Iftikhar, who is treating Bibi for post-traumatic stress disorder (PTSD).

According to Javid Khan, an official with the National Disaster Management Authority, PTSD is one of the most common ailments among the displaced.

He recounts to IPS his recent interaction with a woman in a camp in Bannu, whose husband was killed by shelling in Miramshah, the headquarters of North Waziristan.

“Now she is completely disoriented and extremely concerned about the future of her three sons and one daughter,” he says, adding that those who were uprooted are sure to develop long as well as short-term disorders as a result of prolonged stress, anxiety and fear.

Other conditions could include de-personalisation, classified by DSM-IV as a dissociative disorder in which a person experiences out-of-body feelings and severe disorientation; as well as de-realisation, an alteration in perceptions of the external world to the point that it appears unreal, or ‘dream-like’.

Experts say that people torn from their native villages, thrust into completely new surroundings and experiencing insecurity on a daily basis are highly susceptible to these types of conditions, which are associated with severe trauma.

Khan says women and children, who comprise 73 percent of IDPs according to the World Health Organisation (WHO), are likely to be disproportionately impacted by PTSD, as well as disorders related to anxiety, stress, panic and depression.

Muhammad Junaid, a psychologist working with the displaced, says that victims are also suffering from poor self-esteem, as they are forced to occupy tents and shacks, in extremely unsanitary conditions.

Mothers are particularly impacted by their inability to provide for their families, he tells IPS, adding that permanent phobias are not uncommon.

Another major concern among health officials here is how the situation will affect children, many of whom are at a very sensitive age.

“From childhood to adolescence, a child passes through dramatic phases of physical and mental development,” Junaid says. “During this transition, they gain their identity, grow physically and establish familial relationships, as well as bonds with their community and society as a whole.”

Ripped from their ancestral homes and traditional communities, he says, this process will be interrupted, resulting in long-term mental conditions unless properly addressed.

Parents are equally worried about what displacement might mean for their children’s education.

“Two of my sons are very good at their studies,” Muhammad Arif, a shopkeeper from Mirali, an administrative division in North Waziristan, confides to IPS. “They would do well in class and get good positions. Now there’s no school and I fear they will not progress with their education.”

Even if they were to return to Waziristan, he says, the future looks bleak, since the army operation has devastated homes, buildings and business establishments. Everything will have to be built back up from scratch before the people can return to a normal life, he laments.

After nearly a month in the camp, Arif’s 10-year-old son Sadiq has all but given up hope. Through tears, he tells IPS that children like him have “no sleep, no play, no education.”

“I don’t know what the future holds for us,” he says.

For long-time health experts in the region, the situation is a frightening climax of a crisis that has been building for years, ever since the army began a crackdown on insurgents in the rugged, mountainous regions of northern Pakistan nearly 12 years ago.

“Around 50 percent of the residents of FATA have suffered psychological problems due to militancy and subsequent military operations,” Muhammad Wajid, a psychiatrist at the Khyber Pakhtunkhwa Teaching Hospital in Peshawar tells IPS.

Since 2005, nearly 2.1 million FATA residents have taken refuge in KP, according to Javid, posing a real challenge to the local government, which has struggled to balance the needs of the displaced with its own impoverished local population.

The latest wave of refugees has only added to the government’s woes, and many in the region fear the situation is on a knife’s edge, especially in the holy month of Ramadan, when there is a desperate need for proper sanitation and food to break the daily fast.