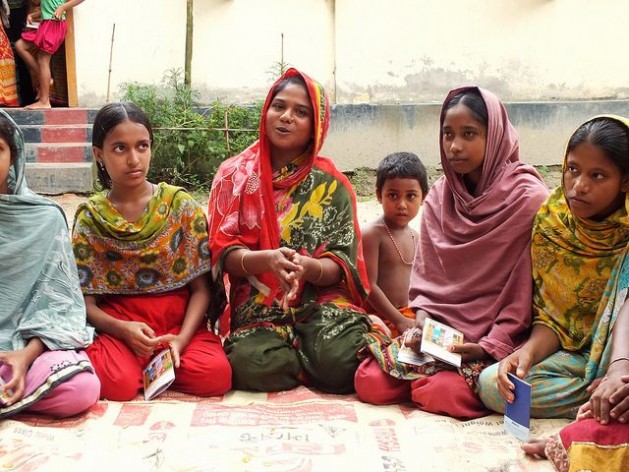 Adolescent girls in Bangladesh’s Mymensingh district meet once a week to discuss their rights. Here they talk about sanitation and personal hygiene. Credit: Naimul Haq/IPS

RANGPUR, Bangladesh, Aug 25 2014 (IPS) - Until five years ago, Shima Aktar, a student in Gajaghanta village in the Rangpur district of Bangladesh, about 370 km northwest of the capital Dhaka, was leading a normal life. But when her father decided that it was time for her to conform to purdah, a religious practice of female seclusion, things changed.

The young girl, now 16 years old, says her father pulled her out of school at the age of 11 and began to lay plans for her marriage to an older man “for her own protection” he said.

Born to a hardline Muslim family, pretty, shy Shima might have taken these changes in stride – were it not for the support of a local youth advocacy group.

“The absence of political will, conceptual clarity, appropriate institutional arrangements and allocation of adequate resources are challenges to the achievement of substantive equality between women and men […].” -- Shireen Huq, founding member of Naripokkho, a leading women's rights NGO
Now that she knows her rights, Shima is fighting hard to assert them, joining a veritable army of young women around this country of 160 million who are determined to change traditional views about gender.

Besides the Empowering Adolescents initiative, other grassroots schemes to educate communities on the rights of women include groups that practice interactive popular theatre (IPT), designed to address social issues at a local level.

Using a mix of popular folk tales and traditional songs and dancing, the actors perform for their parents, local officials and other influential community members, determined to have their voices heard by breaking out of the box.

The Centre for Mass Education in Science (CMES), an NGO working in a remote part of the Rangpur district, recently put on a public performance to illustrate the need to abolish the dowry system, and boost female participation in the public workforce.

Thousands of women here live under the shadow of dowry-related violence. The Hong Kong-based Asian Legal Resource Centre (ALRC) reported some years ago that the practice of dowry leads to torture, acid attacks and sometimes even murder and suicide.

Very often, women are either killed or commit suicide when they are unable to pay the full price of the dowry.

Mohammed Rashed of CMES believes that educating people as to the impacts of traditional practices and ideas can stem such unnecessary tragedies.

“By involving parents, teachers, community and religious leaders and government officials in awareness campaigns we have been able to bring positive changes,” he told IPS.

Already, efforts to spread awareness are bearing fruit. According to UNICEF, some 600,000 adolescents around the country, 60 percent of them girls, are now educated on issues like the legal marriage age of boys and girls, as well as the importance of education and family planning, as a direct result of grassroots advocacy.

Between 64 and 84 percent of adolescents interviewed by the Dhaka-based NGO Unnayan Onneshan claimed that dowry practice had decreased in their communities since 2010.

Policies driven by demands to increase girls’ education have also enabled a much higher rate of female participation in schools.

In 1994 the government introduced the Female Secondary School Stipend Programme – funded by the World Bank, the Asian Development Bank (ADB) and the Norwegian government – that offered adolescent girls a small amount of money every six months to stay in school.

Although urban and rural disparities still exist, the average primary school enrollment rate for girls is now as high as 97 percent, one of the highest in the developing world.

The field of reproductive health and rights has also witnessed improvements. The presence of skilled birth attendants in rural areas has increased from less than five percent in the early 90s to 23 percent today, while contraceptive use among women has dramatically increased from a mere eight percent in 1975 to about 62 percent in 2011.

Despite these achievements, girls still lag behind their male counterparts throughout much of the country.

World Bank data from 2010 shows that 57 percent of women participate in the labour force, while men show a much higher rate of employment, at 88 percent.

Shireen Huq, a leading women’s rights activist, told IPS, “Despite the impressive gains, women and girls continue to be discriminated [against]. The result manifests in the unacceptably high number of maternal deaths [and] the dropout rate for girls in secondary schools.”

Meanwhile, some 66 percent of girls in Bangladesh are married before their 18th birthday, giving the country one of the highest rates of child marriage in the world.

Huq, a founding member of Naripokkho, a leading NGO on the rights of women, also said, “The absence of political will, conceptual clarity, appropriate institutional arrangements and allocation of adequate resources are challenges to the achievement of substantive equality between women and men […].”

Experts believe it is important to involve women at every level of decision-making, including in Union Councils (UC) – the smallest administrative units in Bangladesh – which could enhance women’s participation in public life.

Some 67 percent of respondents to a survey conducted by UNICEF in 2010 felt that female members of the UCs should be given more representation and power to make decisions for their communities.