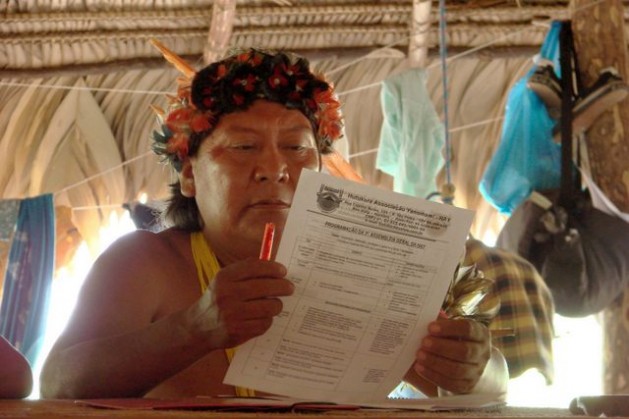 Davi Kopenawa at an assembly of the the Hutukara Associação Yanomami . Credit: Courtesy Luciano Padrã/Cafod

RIO DE JANEIRO, Aug 14 2014 (IPS) - Davi Kopenawa, the leader of the Yanomami people in Brazil’s Amazon rainforest, who is internationally renowned for his struggle against encroachment on indigenous land by landowners and illegal miners, is now fighting a new battle – this time against death threats received by him and his family.

“In May, they [miners] told me that he wouldn’t make it to the end of the year alive,” Armindo Góes, 39, one of Kopenawa’s fellow indigenous activists in the fight for the rights of the Yanomami people, told IPS.

Kopenawa, 60, is Brazil’s most highly respected indigenous leader. The Yanomami shaman and spokesman is known around the world as the “Dalai Lama of the Rainforest” and has frequently participated in United Nations meetings and other international events.

“The landowners and the garimpeiros have plenty of money to kill an Indian. The Amazon jungle belongs to us. She protects us from the heat; the rainforest is essential to all of us and for our children to live in peace.” -- Davi Kopenawa

He has won awards like the Global 500 Prize from the United Nations Environment Programme (UNEP). His voice has drawn global figures like King Harald of Norway – who visited him in 2013 – or former British footballer David Beckham – who did so in March – to the 96,000-sq-km territory which is home to some 20,000 Yanomami.

Kopenawa is president of the Hutukara Yanomami Association (HAY), which he founded in 2004 in Boa Vista, the capital of the northern state of Roraima. Before that he fought for the creation of the Yanomami Indigenous Territory (TI), which is larger than Portugal, in the states of Amazonas and Roraima, on the border with Venezuela.

On Jul. 28, HAY issued a statement reporting that its leader had received death threats in June, when Góes, one of the organisation’s directors, was accosted on a street in the Amazonas town of São Gabriel da Cachoeira by “garimpeiros” or illegal gold miners, who gave him a clear death message for Kopenawa.

Since then “the climate of insecurity has dominated everything,” Góes told IPS.

Garimpeiros are penetrating deeper and deeper into Yanomami territory in their search for gold, in Brazil as well as Venezuela, encroaching on one of the world’s oldest surviving cultures. 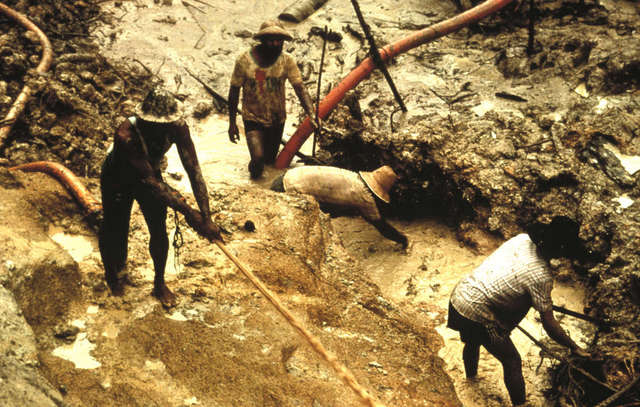 The Yanomami TI was demarcated just before the 1992 Earth Summit held in Rio de Janeiro. And it was the Rio+20 Summit, held in this city in 2012, that made Kopenawa more prominent at home, where he was less well-known than abroad.

“Davi is someone very precious to Brazil, but some people see him as an enemy. He is a thinker and a warrior who forms part of Brazil’s identity and has fought for the rights of the Yanomami and other indigenous people for over 40 years,” activist Marcos Wesley, assistant coordinator of the Rio Negro sustainable development programme of the Socioenvironmental Institute (ISA), told IPS.

The Rio Negro, the biggest tributary of the Amazon River, runs across Yanomami territory.

In the 1990s, Kopenawa managed to get 45,000 garimpeiros evicted from the Yanomami TI, Wesley noted. “He and Hutukara are the spokespersons for the Yanomami, for their demands. I can imagine there are people who have suffered economic losses and are upset over the advances made by the Yanomami,” he added.

“There are threatening signs that put us on the alert,” Góes said. “We are working behind locked doors. Two armed men were already searching for Davi in Boa Vista. They even offered money if someone would identify him. We are getting more and more concerned.”

The director of HAY explained that “our lives are at risk, and our elders advised Davi to take shelter in his community.” 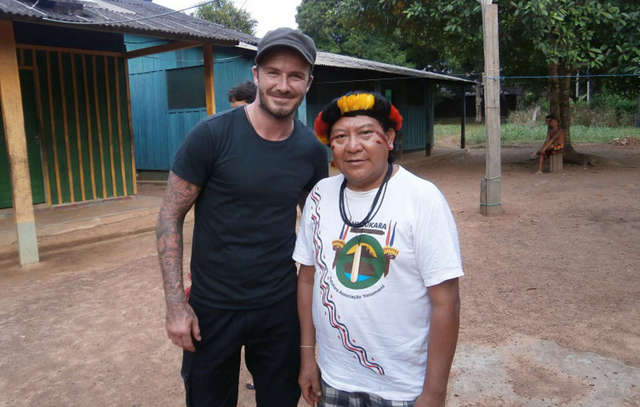 Although the Yanomami TI was fully demarcated, illegal activities have not ceased there.

“There are many people invading indigenous land for mining,” Góes said.

Kopenawa comes from the remote community of Demini, one of the 240 villages in the Yanomami TI. The only way to reach the village is by small plane or a 10-day boat ride upriver.

On Aug. 8, IPS managed to contact the Yanomami leader, just a few minutes before he set out for his community. But he preferred not to provide details about his situation, because of the threats.

“At this moment I prefer not to say anything more. I can only say that I am very worried, together with my Yanomami people; the rest I have already said,” he commented.

Five days earlier, Kopenawa had been one of the guests of honour at the 12th International Literature Festival in Paraty in the southern state of Rio de Janeiro. He talked about the violence facing his people, when he presented his book “The Falling Sky: Words of a Yanomami Shaman”.

Violence against environmentalists and indigenous activists

The organisation Global Witness reported that nearly half of the murders of environmentalists committed in the world in the last few years were in Brazil. In the 2012-2013 period the total was 908 murders, 443 of which happened in this country.

The 2013 report by the Catholic Indigenous Missionary Council (CIMI) on violence against indigenous people in Brazil documented 53 victims of murder, 29 attempted murders, and 10 cases of death threats.

The executive secretary of CIMI, Cleber Buzatto, told IPS that threats against indigenous leaders had increased in the last year.

“Economic interests act together and mount violent attacks on the rights of indigenous people, especially in terms of their rights to their territory,” he added. “It’s a very touchy situation. The threats continue to occur because of the existing impunity and because the authorities have not taken effective action.”

“The landowners and garimpeiros have plenty of money to kill an Indian. The Amazon jungle belongs to us. She protects us from the heat; the rainforest is essential to all of us and for our children to live in peace,” he said.

He had previously denounced that “They want to kill me. I don’t do what white people do – track someone down to kill him. I don’t interfere with their work. But they are interfering in our work and in our struggle. I will continue fighting and working for my people. Because defending the Yanomami people and their land is my work.”

In its communiqué, HAY demanded that the police investigate the threats and provide Kopenawa with official protection.

“The suspicion is that the threats are in reprisal for the work carried out by the Yanomami, together with government agencies, to investigate and break up the networks of miners in the Yanomami TI in the last few years,” HAY stated.

Kopenawa and HAY provide the federal police with maps of mining sites, geographic locations, and information on planes and people circulating in the Yanomami TI. Their reports have made it possible to carry out operations against garimpeiros and encroaching landowners; the last large-scale one was conducted in February.

According to the federal police, in Roraima alone, illegal mining generates profits of 13 million dollars a month, and many of the earnings come from Yanomami territory.

Góes stressed to IPS that mining has more than just an economic impact on indigenous people.

“It causes an imbalance in the culture and lives of the Yanomami, and generates dependence on manufactured, artificial objects and food. It changes the entire Yanomami world vision. Mining also generates a lot of pollution in the rivers,” he complained.

“We know that in Brazil we unfortunately have a high rate of violence against indigenous leaders and social movements,” Wesley said. “Impunity reigns. Davi is a fighter, and will surely not be intimidated by these threats. He believes in his struggle, in the defence of his people and of the planet.”

In Brazil there is no specific programme to protect indigenous people facing threats.

Representatives of Brazil’s indigenous affairs agency, FUNAI, told IPS that a request from protection was received from Kopanawa and other HAY leaders, and that it was referred to the programme of human rights defenders in the Brazilian presidency’s special secretariat on human rights.

But they said that in order to receive protection, the Yanomami leader had to confirm that he wanted it, and the government is waiting for his response to that end.