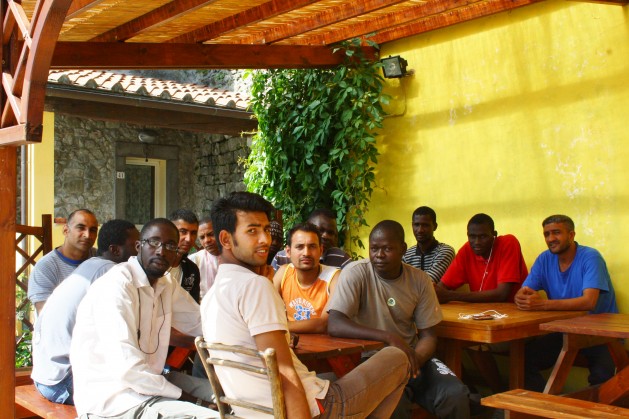 LUCCA, Italy, Aug 1 2014 (IPS) - His journey started four years ago in Conakry, Guinea. Now that Mamoudou* has finally reached Italy, he hopes this will be his final stop.

When he first left his home, his plan was to stay in Libya, but after the 2011 crisis, when Gaddafi’s government was overthrown, life in the country became very hard for migrants. “I was jailed 28 times, and tortured,” he told IPS, “so I decided to come to Italy, because it’s a democracy and I hope I will have a peaceful and secure life here.”

Together with 13 other asylum seekers from Mali, Pakistan and Bangladesh, Mamoudou is now living in a tiny village in the Tuscan mountains, where the ‘Partecipazione e Sviluppo’ association is taking care of his application.

“While trying to look at tackling the root causes [of migration] in economic disparity may be a laudable objective, it is not going to make a difference any time soon […] Without an effective rescue response people are going to drown, and they have drowned, and more will drown” – Benjamin Ward, Deputy Director of Human Rights Watch

They all arrived between April and June from Libya, where they had migrated to escape conflicts and hunger and it is now painful for them to recall how their voyage took. “

In order to smuggle me to the Libyan coast, they put me in the boot of a car,” says Mamoudou. “I don’t know how many hours I spent there and what day I left Libya, but my registration documents say I arrived in Sicily on April 11. “

He paid the equivalent of 1,000 dollars to human traffickers to share a boat with 80 people and no skipper. “They told us where the North was and that we should have taken turns steering. When the Italian Navy found us, we had no idea where we were and the boat was already sinking.”

Since the tragedy off the Italian island of Lampedusa, which left more than 350 migrants dead in October last year, the Italian authorities have started a rescue operation called ‘Mare Nostrum’ (Our Sea). Mamoudou is one of the more than 80,000 migrants that have been saved since the operation started, winning appreciation from human rights NGOs and European Union authorities.

“Mare Nostrum is extremely important because it has saved many lives,” Benjamin Ward, Deputy Director of Human Rights Watch, told IPS. “We think it is something that needs to continue and we are among other groups calling for the European Union to respond positively to Italy’s call for European support for the operations”.

Given the high costs of the operations – about 9.3 million euro a month, according to Italian Navy – the Italian Minister of the Interior, Angelino Alfano, who is also leader of the New Centre Right (NCD) party, has stressed on several occasions the need for Frontex, the European Union border management agency, to take over Mare Nostrum.

“Mare Nostrum was set up as an emergency operation. It can’t last forever,” the minister told G6 interior ministers in Barcelona in June. ”Europe must replace Italy in this effort, and Italy will continue to make its contribution,” he added.

“Europe must come up with a clear strategy to regulate the flow of migrants. The Mediterranean that unites us is a European sea. It does not just belong to Italy, Spain, or any of the other countries that look onto this extraordinary body of water,” said the minister.

Yet, the answer of the European Commission leaves little room for negotiation. “Mare Nostrum is a very broad and expensive operation and Frontex is a small agency, it cannot take over Mare Nostrum,” Michele Cercone, spokesperson for EU Commissioner for Home Affairs Cecilia Malmström, explained to IPS. “Of course Frontex can and will contribute and can do a lot, but we don’t have the means to totally substitute it.”

Despite the widespread approval that the Italian rescue operation enjoys, Italian right-wing party Northern League has been calling for its termination since its early stages. “The only real outcome of Mare Nostrum is the favour we make to the traffickers, who can now leave tens of thousands of people at risk of dying, because they know the Navy will come and rescue them,” Massimiliano Fedriga, party leader in the Chamber of Deputies, told IPS.

“The only real solution is to have EU observatories in the North African countries to verify who has the right to receive asylum, which must be a European asylum and not the asylum of a single country. The others, the illegal migrants, who are the majority, should not come and must not come to our country,” he concluded.

Yet, in April Alfano had already said that “immigration is deeply changing profile […] there are increasingly more asylum seekers than economic migrants.”

Riccardo Noury, communications director of Amnesty International Italy, confirmed. “The migrants who arrive, when they manage to survive, at the European border, which is often the Italian and the Greek border, are mostly people who would have the right to asylum or other types of international protection,” he told IPS.

Both Amnesty International and Human Rights Watch seem to be mostly concerned by Europe resistance to changing its approach towards migration.

“Obviously there are other aspects like border enforcement, like taking action against dangerous smuggling, which are important and need to continue, but we do think that saving lives should be the top priority,” said Ward.

“While trying to look at tackling the root causes in economic disparity may be a laudable objective, it is not going to make a difference any time soon […] Without an effective rescue response people are going to drown, and they have drowned, and more will drown. That in our view is something that has to be engaged. The European Union can’t simply say that it’s Italy’s mess to fix,” he added.

According to Noury, there are several reasons why Italy’s requests have not been heard.

“In the past years, Italy has lost the chance to show credible policies while asking for Europe’s support. We have been the country of push-backs, the country that threatened to release fake residence permits during the 2011 crisis to allow migrants to cross the Italian Northern border… we haven’t been a reliable partner when it came to reform the EU’s migration policies,”  the Amnesty International spokesperson commented.

“But we now have another opportunity, with the EU presidency [which Italy assumed for a six-month period at the beginning of July], to assume a leadership role.”

If Italy fails to obtain strategic and financial support from the European Union, it will be soon forced to scale down or discontinue its rescue operations. One year after the Lampedusa tragedy, exactly same conditions might be in place, and the consequences could be deadly once again.

* Name changed to protect his identity.