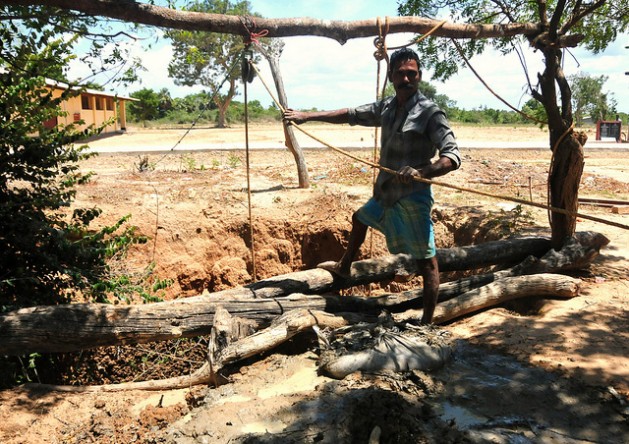 A villager prepare to dig a deep well by hand in the drought-stricken village of Tunukkai in Sri Lanka's northern Mullaithivu District. Credit: Amantha Perera/IPS

COLOMBO, Sep 29 2014 (IPS) - The last time there was mud on his village roads was about a year ago, says Murugesu Mohanabavan, a farmer from the village of Karachchi, situated about 300 km north of Sri Lanka’s capital, Colombo.

“Since last October we have had nothing but sun, all day,” the 40-year-old father of two school-aged children told IPS. If his layman’s assessment of the rain patterns is off, it is by a mere matter of weeks.

At the disaster management unit of the Kilinochchi District Secretariat under which Mohanabavan’s village falls, reports show inadequate rainfall since November 2013 – less than 30 percent of expected precipitation for this time of year.

“We don’t have any savings left; I still need to complete a half-built house and send two children to school. The nightmare continues." -- Murugesu Mohanabavan, a farmer from the village of Karachchi, 300 km north of Sri Lanka’s capital, Colombo
Sri Lanka is currently facing a severe drought that has impacted over 1.6 million people and cut its crop yields by 42 percent, according to government analyses. But a closer look at the areas where the drought is at its worst shows that the poorest have been hit hardest.

Of the drought-affected population, over half or roughly 900,000 people, are from the Northern and Eastern Provinces of the country, regions that have been traditionally poor, dependent on agriculture and lacking strong coping mechanisms or infrastructure to withstand the impact of natural disasters.

Take the northern Kilinochchi district, where out of a population of some 120,000, over 74,000 are affected by the drought; or the adjoining district of Mullaithivu where over 56,000 from a population of just above 100,000 are suffering the impacts of inadequate rainfall.

The vast majority of residents in these districts are war returnees, who bore the brunt of Sri Lanka’s protracted civil war that ended in May 2009. Displaced and dodging the crossfire of fierce fighting between government forces and the now-defunct Liberation Tigers of Tamil Eelam (LTTE) during the last stages of the conflict, these civilians began trickling back into devastated villages in late 2010.

Despite a massive three-billion-dollar mega infrastructure development plan for the Northern Province, poverty remains rampant in the region. According to poverty data that was released by the government in April, four of the five districts in the north fared poorly.

While the national poverty headcount was 6.7 percent, major districts in the north and east recorded much higher figures: 28.8 percent in Mullaithivu, 12.7 percent in Kilinochchi, 8.3 percent in Jaffnna and 20.1 percent in Mannar.

The figures are worlds apart from the mere 1.4 percent and 2.1 percent recorded in the Colombo and Gampaha Districts in the Western Province.

“The districts in the North were already reeling under very high levels of poverty, which would have certainly accentuated since then due to the prolonged drought to date,” said Muttukrishna Saravananthan, who heads the Point Pedro Institute of Development based in northern Jaffna.

Mohanabavan told IPS that even though he has about two acres of agriculture land that had hitherto provided some 200,000 rupees (1,500 dollars) in income annually, the dry weather has pushed him into debt.

“We don’t have any savings left; I still need to complete a half-built house and send two children to school,” he explained, adding that there is no sign of respite. “The nightmare continues,” he said simply.

Agriculture accounts for 10 percent of Sri Lanka’s national annual gross domestic product (GDP) of some 60 billion rupees (about 460 million dollars). In primarily rural provinces in the north and east, at least 30 percent of the population depends on an agriculture-based income.

Kugadasan Sumanadas, the additional secretary for disaster management at the Kilinochchi District Secretariat, said that limited programmes to assist the drought-impacted population have been launched since the middle of the year.

Around 37,000 persons get daily water transported by tankers and there are a set number of cash-for-work programmes in the district that pay around 800 rupees (about six dollars) per person per day, for projects aimed at renovating water and irrigtation networks.

But to carry out even the limited work underway now, a weekly allocation of over nine million rupees is needed, money that is slow in coming.

“But the bigger problem is if it does not rain soon, then we will have to travel out of the province to get water, more people will need assistance for a longer period, that means more money [will be required],” Sumanadas said.

In April this year, a joint assessment by the World Food Programme and the government warned that half the population in the Mullaithivu district and one in three people in the Kilinochchi district were food insecure.

Sumanadas is certain that in the ensuing four months, the figure has gone up.

In fact, the government decided to lift import bans on the staple rice stocks in April and is expected to make up for at least five percent of harvest losses through imports.

The main water source in the district, the sprawling Iranamadu Reservoir – 50 square km in size, with the capacity to irrigate 106,000 acres – is a gigantic dust bowl these days, the official said. That scenario, however, is not limited to the north and east.

“All reservoir levels are down to around 30 percent in the island,” Ivan de Silva, the secretary to the minister of irrigation and water management, told IPS.

He attributes the debilitating impact of the drought to two factors working in tandem: the increasing frequency of extreme weather events and the lack of proper water management.

“In the past we excepted a severe drought every 10 to 15 years, now it is happening almost every other year,” de Silva said.

A similar drought in late 2012 also impacted close to two million people on this island of just over 20 million people, and forced agricultural output down to 20 percent of previous yields.

That drought however was broken by the onset of floods brought on by hurricane Nilam in late 2012.

“We should have policies that allow us to manage our water resources better, so that we can better meet these changing weather patterns,” he said.

The country is slowly waking up to the grim reality that a changing climate requires better management. This week the government launched a 100-million-dollar climate resilience programme that will spend the bulk of its funds, around 90 million dollars, on infrastructure upgrades.

Part of the money will also be allocated to studying the nine main river basins around the country for better flood and drought management policies.

S M Mohammed, the secretary to the ministry of disaster management, admitted that national coping levels were not up to par when she said at the launch of the programme on Sep. 26, “Our country must change from a tradition of responding [to natural disasters] to a culture of resilience.”

Such a policy, if implemented, could bring a world of change to the lives of millions who are slowly cooking in the blistering sun.