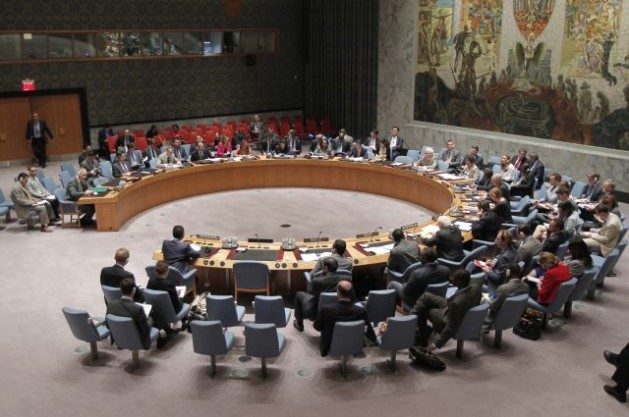 UNITED NATIONS, Sep 12 2014 (IPS) - The U.N. Security Council (UNSC), the only international body empowered to declare war and peace, continues to remain a silent witness to the widespread devastation and killings worldwide, including in Palestine, Syria, Iraq, Libya, Yemen and Ukraine.

A sharply divided UNSC has watched the slaughter of Palestinians by Israel, the genocide and war crimes in Syria, the Russian military intervention in Ukraine, the U.S. military attacks inside Iraq and now a virtual invasion of Syria – if U.S. President Barack Obama goes ahead with his threat to launch air strikes against the Islamic State of Iraq and Syria (ISIS).

"As an instrument for preventing or restraining war, the United Nations has devolved into a plaintive institution, with its Security Council dominated by superpowers." -- Norman Solomon

The United States has refused to go before the UNSC for authorisation and legitimacy – even if it means suffering a veto by Russia or China or both.

Still, ironically, Obama is scheduled to preside over a UNSC meeting when he is in New York in late September since the United States holds the presidency under geographical rotation among the 15 members in the Council.

A head of state or a head of government chairing a meeting of the Security Council is a rare event, not a norm.

But it does happen when a UNSC member presides over the Council in the month of September during the opening of a new General Assembly session, with over 150 world leaders in tow.

In his address to the nation early this week, Obama said, “I will chair a meeting of the U.N. Security Council to further mobilise the international community around this effort” (“to degrade and destroy ISIS”, the rebel Islamic militant group inside Iraq and Syria).

Still, the proposed strike inside Syria is not part of the Council’s agenda – and certainly not under the U.S. presidency.

Obama also said intelligence agencies have not detected any specific ISIS plots against the United States.

ISIS is still a regional threat that could ultimately reach out to the United States, he said, justifying the impending attacks.

Norman Solomon, executive director of the Washington-based Institute for Public Accuracy and co-founder of RootsAction.org, told IPS, “As an instrument for preventing or restraining war, the United Nations has devolved into a plaintive institution, with its Security Council dominated by superpowers — most of all by the United States in tandem with its permanent-member allies.”

He said it used to be that U.S. presidents at least went through the motions of seeking Security Council approval for going to war, but this is scarcely the case anymore.

“When it lacks the capacity to get what it wants by way of a non-vetoed Security Council resolution for its war aims, the U.S. government simply proceeds as though the United Nations has no significant existence,” said Solomon, author of ‘War Made Easy: How Presidents and Pundits Keep Spinning Us to Death.’

Internationally, he said, this is the case because there are no geopolitical leverage points or institutional U.N. frameworks sufficient to require the United States to actually take the Security Council seriously as anything much more than a platform for pontification.

A Russian official was quoted as saying the Obama administration would need to get a UNSC resolution before it launches air attacks inside Syria — which, of course, the Russians did not do either before they intervened in Ukraine.

Perhaps all this points only in one direction: the UNSC has time and again proved its unworthiness – and remains ineffective and politically impotent having outlived its usefulness, particularly in crisis situations.

The veto-wielding permanent members of the UNSC – the United States, Britain, France, China and Russia – are obviously not interested in fairness, justice or political integrity but only interested in protecting their own national interests.

In an editorial Friday, the New York Times struck a cautious note when it said there will be no turning back once air strikes enter Syrian territory, unleashing events that simply cannot be foreseen.

“Surely, that’s a lesson America has learned from the wars in Iraq and Afghanistan.”

Stephen Zunes, professor of politics and international studies at the University of San Francisco where he serves as coordinator of the programme in Middle Eastern Studies, told IPS, “Regardless of whether it is justified or not, air strikes by the United States or other foreign powers in Iraq and Syria are clearly acts of war requiring U.N. authorisation.”

If the threat from ISIS and the limited nature of the military response is what President Obama says it is, then the United States should have little trouble in receiving support from the Security Council, said Zunes, who has written extensively on the politics of the Security Council and serves as a senior policy analyst for Foreign Policy in Focus at the Institute for Policy Studies.

“The refusal to come to the United Nations, then, serves as yet another example of the contempt Washington apparently has for the world body,” he said.

Peter Yeo, executive director of Better World Campaign, a non-governmental organisation (NGO) dedicated to strengthening U.S.-U.N. relations, has called on the U.S. Congress to engage the United Nations in addressing the critical challenges in the Middle East, including Syria and Iraq.

“Let Congress know the U.S. cannot go it alone in confronting this challenge, and that we should continue to utilise resources like the U.N. Security Council and the U.N.’s humanitarian response agencies to combat ongoing and future threats,” he said.

More than ever, the U.S. needs the U.N. as a strategic partner to help facilitate the complex security and humanitarian response needs in the region, he said in a statement released Thursday.

Solomon told IPS that the domestic politics of the U.S. have been sculpted in recent decades to relegate the U.N. to the role of afterthought or oratorical amphitheatre unless it can be coupled to the U.S. war train of the historic moment.

“Deformed as it is as a representation of only the governments of some sectors of global power, the Security Council still has some potential for valid exercise of discourse – even diplomacy – if not legitimate decision-making per se.”

But the Security Council ultimately represents the skewed agendas of its permanent members, and those agendas only include peace to the extent that permanent members are actually interested in peace and such interest, at best intermittent, depends on undependable willingness to look beyond narrow nationalistic and corporate interests, Solomon added.

“Of course, the U.S. government has continued to engage in acts of war in several countries on an ongoing basis for more than a dozen years.”

The U.S. government will decide whether to seek any authorisation or resolution from the U.N. Security Council primarily on the basis of gauging likely benefits of rhetorical grandstanding, Solomon predicted.