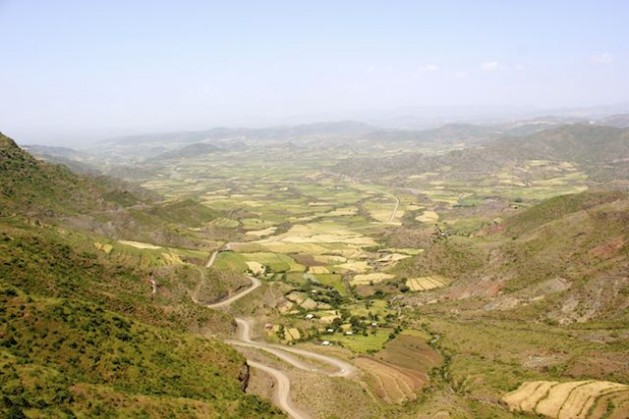 Ethiopia has an estimated 70 million smallholder farmers, many of whom only grow sufficient amounts of crops like grain and coffee to support their families like those in Lalibela, Amhara Region. Climate change will inevitably have an impact on people’s lives. Credit: James Hassam/IPS

ADDIS ABABA, Oct 21 2014 (IPS) - Ethiopia is widely regarded as an African success story when it comes to economic growth. According to the International Monetary Fund, the country’s economy is growing by seven percent annually. But there are concerns that climate change could jeopardise this growth.

At a recent meeting at the United Nations conference centre in the Ethiopian capital, Addis Ababa, the world’s foremost climate change experts sent a clear message: the impacts of global warming, rising surface temperatures and extreme weather will be felt as acutely in Africa as anywhere in the world.

For the last 18 months, more than 800 climate scientists have been compiling the Fifth Assessment Report (AR5) of the U.N.’s Intergovernmental Panel on Climate Change (IPCC). The report, which is being released in four parts until November, is according to the IPCC the most comprehensive, authoritative, objective assessment ever produced on the way climate change is affecting our planet.

Its findings are unequivocal – climate change is real and there is more evidence than ever before that it is being driven by human activity.

In Ethiopia, the IPCC says, climate change will inevitably have an impact on people’s lives. Dr Katie Mach, a climate scientist at Stanford University and lead author on the AR5, gave a stark assessment of the impacts climate change could have on Africa’s second-most populous country.

The IPCC says the economic impacts of climate change will be most severe in developing countries. This is because the economies of poorer nations are less able to adapt to changes affecting industry and jobs.

Many of Ethiopia’s 90 million people are still reliant on agriculture to earn a living. The country has an estimated 70 million smallholder farmers, many of whom only grow sufficient amounts of crops like the staples of grain and coffee to support their families.

It is these smallholder farmers who are most vulnerable to the impacts of climate change, particularly if temperatures rise sufficiently to damage crops like coffee.

“Coffee’s worth about 800 million dollars at the moment and under the government’s plan for economic growth it’s set to grow to 1.6 billion dollars by 2025,” Adam Ward, acting country representative for the Global Green Growth Institute, an intergovernmental organisation that works as a partner with Ethiopia’s government on its Climate Resilient Green Economy strategy, told IPS.

“If we’re at the top end of the spectrum of climate change impacts, we’re looking at potential annihilation of the coffee crop, so that’s 1.6 billion dollars being lost to the economy if the most serious impacts of climate change become a reality,” Ward said.

For governments – at whose behest the AR5 has been put together – the question is no longer “is climate change happening?” but “what can we do about it?”

The report sets out several options for policymakers, ranging from doing nothing, the so-called “business as usual” course of action, to aggressive measures to tackle climate change, under which governments across the world would take urgent, rapid steps to reduce carbon dioxide emissions.

Ethiopia is taking steps in the right direction, but huge challenges remain. The country’s climate change strategy calls for annual spending of 7.5 billion dollars to combat the effects of climate change, but the actual funding available falls well short of this. According to the Overseas Development Institute (ODI), the government is only able to afford an estimated 440 million dollars per year.

Even so, the IPCC believes there are opportunities for Ethiopia to protect its citizens from the most damaging effects of climate change, typically by adapting to changes that are already taking place.

“An important starting point is reducing vulnerability to the current climate, learning from our experiences with extreme heat, heavy rain or drought,” said Mach.

This is a process that is already underway in Ethiopia, according to the Agricultural Transformation Agency (ATA), a government body set up to help make the country’s agriculture industry more resilient to challenges like climate change.

“Climate change and the ensuing higher frequency and intensity of extreme weather… has already led to visible shifts in the cropping calendar of Ethiopia and significantly increases the risks related to agricultural production, exposing smallholder farmers to vulnerability,” Dr Wagayehu Bekele, director of climate and environment at the ATA, told IPS.

The message from the IPCC is clear – this is a problem that is real and that governments across Africa need to deal with. How they do this and who covers the substantial cost will be up to the politicians.