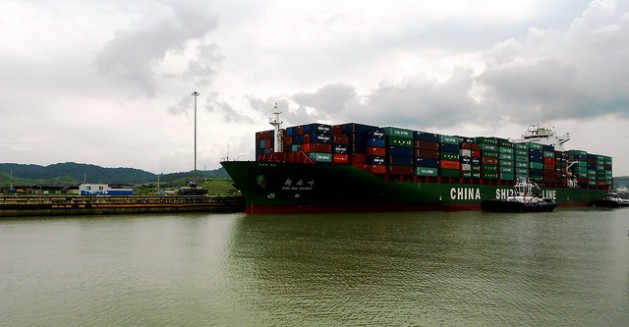 Thanks to the expansion, the Panama Canal will be able to accommodate ships that carry up to 14,000 containers, instead of the current 5,000. Credit: Fabíola Ortiz/IPS

PANAMA CITY, Oct 3 2014 (IPS) - With the expansion of the canal, Panama hopes to see its share of global maritime trade rise threefold. And many Panamanians hope the mega-engineering project will reduce social inequalities in a country where development is moving ahead at two different speeds.

The expansion is happening one hundred years after the inauguration of the canal that links the Pacific and Atlantic oceans. At the heart of the project is a third set of locks, larger than the current two, which will accommodate ships with a maximum length of 400 metres, a maximum width of 52 metres and a draught of 15 metres.

Currently the 12,000 ships going through the canal every year have a maximum length of 294 metres, a maximum width of 32 metres and a draught of 12 metres, which means the canal handles only about five percent of global seaborne trade.

The expansion of the canal - in numbers

Work on the expansion of the Panama Canal began in 2007 after the project was approved by 77 percent of voters in a referendum the year before. The initial completion date was this month - October 2014.

But the Grupo Unidos por el Canal SA, which is carrying out the expansion, suffered several delays because of labour strikes and the suspension of the construction work due to disputes over the cost of the project, which have now been worked out. The consortium is headed by the construction companies Sacyr from Spain and Impregilo from Italy, which each hold a 48 percent share.

The huge Post-Panamax ships, which will be able to pass through the canal after it has been expanded, will carry up to 14,000 containers, compared to the current maximum of 5,000 carried by Panamax vessels.

In addition, it will take only two and a half hours to go through the canal, instead of the current eight to ten, and the cost will be reduced by at least 12 percent.

Some 7,000 people are working on the canal expansion, 90 percent of whom are from Panama. The project has also generated around 35,000 indirect jobs, according to the Panama Canal Authority.

The construction work, which began in 2007 and is to be completed in December 2015, is 80 percent done, Ilya de Marotta, the engineer in charge of the expansion works in the Panama Canal Authority (ACP), the government agency responsible for the management of the canal, told IPS.

The aim of the expansion is to boost the canal’s share of global shipping traffic to 15 percent, Olmedo García, director of the University of Panama’s Canal Institute, explained in an interview with IPS.

The 5.2-billion-dollar project will mean the 79-km canal will be able to handle larger vessels capable of carrying nearly three times as many containers.

“The canal now contributes 1.1 billion dollars a year to the national budget. Gross revenues are 2.3 billion dollars, but operating the canal absorbs 1.2 billion,” the academic explained.

“As soon as we finish the expansion, we have to think of building a fourth set of locks, which would cost 12 billion dollars,” said García, because the canal “is and will be the country’s main economic and commercial activity.”

De Marotta said “the expansion was indispensable because the canal was reaching the maximum capacity of boats that could go through. The demand for bigger ships is a global tendency, for bulk carriers and liquefied natural gas carriers – a client we don’t have because they are bigger vessels.”

“This is a good business that we’ll be able to attract now,” she said. “The idea is to avoid falling behind in global trade; with the new locks a container ship could carry 12,000 to 14,000 containers,” the engineer said.

According to projections, the country’s canal revenue will have climbed to 2.5 billion dollars by 2019 and to six billion by 2025, García said.

“The big advantage is that we not only have the Panama Canal, but also the logistics centre; together they represent 40 percent of our GDP. We have the best logistics connectivity in Latin America, with ports on each ocean, railways and the free trade zone,” he said.

“We can create multimodal trade with the merchandise distribution ports,” he added. 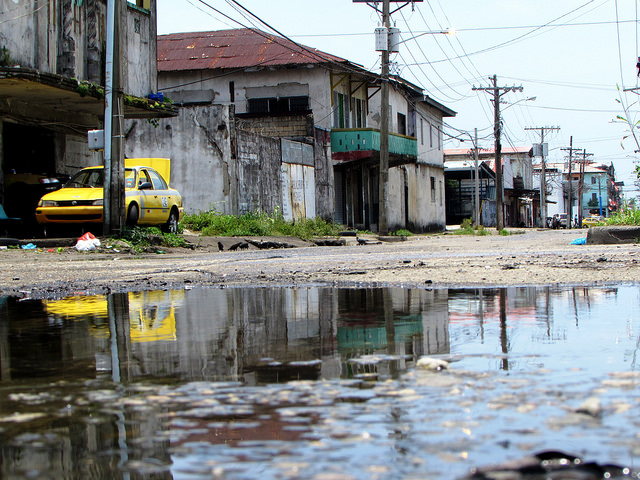 The neglect of the historic centre of Colón near the Caribbean Sea entrance to the Panama Canal and next to the city’s Free Trade Zone reflects the contrast between the pace of economic growth and social development in this Central American country. Credit: Fabíola Ortiz/IPS

Social development at another level

But Panama’s priorities must change in order for the promising economic prospects engendered by the expansion of the canal to translate into benefits for the poorest segments of the population.

Despite annual GDP growth of around seven percent, because of the high levels of inequality, 27.6 percent of the population is poor according to figures from Sept. 28, although García and other academic sources told IPS the poverty rate is actually nine percentage points higher.

In rural areas of this country of 3.8 million people poverty stands at 49.4 percent, compared to 12 percent in urban areas. Worst off are the country’s small indigenous minority, who suffer from a poverty rate of 70 to 90 percent.

And according to official figures from August, 38.6 percent of the economically active population is engaged in the informal sector of the economy.

Thousands of families lack piped water and services such as health care and transportation.

Alfredo Herazo, 29, lives in the capital but takes a bus every day to the city of Colón, where he works in a soldering workshop that he and his father set up. “I don’t like this life but I don’t have any other options,” he told IPS at the end of a long day of work, as he got ready for the 79-km commute back to Panama City.

Colón, the second largest city in Panama, is a port near the Caribbean Sea entrance to the canal and is surrounded by the area that was the Panama Canal Zone when it was under U.S. control.

The canal was fully handed over to Panama on Jan. 1, 2000, as stipulated by the “Torrijos- Carter” treaties signed by the two countries in 1977.

The 450-hectare Colón Free Trade Zone is the world’s second largest free trade area after Hong Kong, with 2,500 companies that import and re-export with a total annual business volume of 30 billion dollars – although business dipped in 2013 because of disputes with Colombia and Venezuela, its biggest clients.

The Colón Free Trade Zone receives 250,000 visitors a year from all over the world.

“Like any Panamanian, I would like to work on the canal or in the duty free zone, because of the salaries paid there. The canal is our pride and joy. If I get the chance, I would be a solderer there,” Herazo said.

The young man said “the problem with the canal, from the point of view of the ordinary citizen, is that we don’t see the profits, which aren’t distributed among the population.”

The neglect of the rundown historic buildings in Colón contrasts sharply with the modern free trade zone, illustrating the gap between the vibrant growth of the canal and the country’s financial and trade centres and the desperation of those included from the boom.

Cesar Santos, 32, has been living in Colón for seven years, making a living selling fruit and vegetables in the Municipal Market in the city centre. He sets up his stand early every morning across from the Municipal Park.

“With this I only have enough to live as a poor man. Life in Colón isn’t good,” he told IPS.

He lists the problems in the city, stressing the lack of sanitation and decent drainage systems. “When it rains, everything floods, the streets are impassable, the city is paralysed. After a downpour, everything is flooded,” he said.

Besides the lack of urban infrastructure, what bothers him the most is the living conditions of most of the people living in the city.

“People here are really poor,” he said. “People live in condemned houses. Besides all the assaults and thefts, this is a city that has been forgotten by the governments; good thing we have the free trade zone, otherwise there would be even worse poverty,” Santos said, while three customers nodded their heads in agreement.

García, in Panama City, said “The financial centres have to transfer part of their wealth. There is a serious social fracture. The canal can’t just be a channel for trade, communication and world peace. Panamanians need the social debts to be repaid, and part of the wealth should be transferred to the people.”