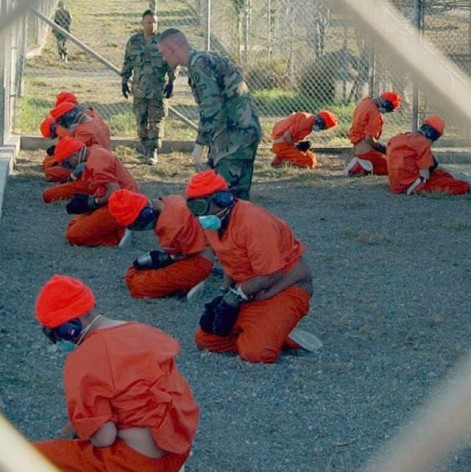 Detainees in orange jumpsuits sit in a holding area under the watchful eyes of Military Police at Camp X-Ray at Naval Base Guantanamo Bay, Cuba, during in-processing to the temporary detention facility on Jan. 11, 2002. Credit: public domain

MONTEVIDEO, Oct 13 2014 (IPS) - Uruguayan President José Mujica bought time for his plan to host six prisoners of Guantánamo, handing over the decision to the winner of the incoming elections. But time is a scarce resource for the inmates of this United States military prison on Cuban soil.

The resettlement of a Palestinian, a Tunisian and four Syrian detainees in Guantánamo is a hot potato for Mujica while his party, the centre-left Broad Front, struggles to pull ahead in the final stretch to general elections set for Oct. 26.

“The U.S. is letting them out because they pose no danger to the U.S. or Uruguay or any other country… They are accused of absolutely no wrongdoing and have never been charged with any crime.” -- Laura Pitter of HRW

Out of 149 inmates currently in Guantánamo, a prison established by George W. Bush (2001-2009) to function beyond the law, 79 are cleared for release at least since 2010, according to the Center for Constitutional Rights (CCR), which has gone to court on behalf of some of the detainees.

Mujica agreed in March to settle six inmates of this group – following a request by U.S. President Barack Obama — some of them suffering from very poor physical and mental health.

Mohammed Abdullah Taha Mattan, a 35-year-old Palestinian, is considered at high risk. Diagnosed with major depression, he has engaged in several hunger strikes in the last few years. Born in the West Bank, he was 23 when Pakistani security services arrested him and rendered him to the U.S. According to one of his attorneys, Lauren Carasik, there is not a single piece of evidence against him.

“The travesty of Guantanamo is that some of the men were rounded up not because of reasonable suspicions, but instead because areas of Pakistan and Afghanistan were blanketed with leaflets offering a bounty for ‘suspected terrorists’, sparking a frenzy of lucrative but wrongful accusations,” said Carasik in an op-ed published by Al Jazeera last year.

The CCR claims that 86 percent of the 789 men and teenagers once jailed in Guantánamo since January 2002 were essentially sold at times when the U.S. military offered bounties of around 5,000 dollars per capture.

Syrian Abu Wa’el Dhiab, a married father of four, has also been protesting via an intermittent hunger strike since February 2013. He suffers from extreme weakness and requires a wheelchair. With no charges against him, Washington cleared him for release in 2009.

Dhiab’s case gained notoriety this year when his attorneys challenged the force-feeding method applied by Guantanamo’s jailers against him and other hunger strikers. U.S. judge Gladys Kessler ordered the disclosure of 28 classified videotapes recording the forced cell extraction and forced feeding of Dhiab.

In a statement read by his lawyers in court, Dhiab claimed that he wanted the U.S. public “to see what is going on at the prison today, so they will understand why we are hunger-striking, and why the prison should be closed.” In August, one of his attorneys said he was “just a skeleton”.

Dhiab had lived with his family in Afghanistan, where he ran a business, but had to flee to Pakistan when the war began after 9/11, according to British human rights NGO Reprieve. A few months later, the Pakistani police arrested him and rendered him to the U.S., possibly in exchange for payment.

In a letter urging the U.S. government to proceed with the transfers to Uruguay, the lawyers of the six detainees said in June that a Uruguayan delegation had interviewed the inmates at Guantánamo and extended to them invitations to resettle, “which they gratefully accepted”.

Mujica, a former guerrilla who served 14 years in inhuman conditions, is one of the many critics of Guantánamo. In recent months, he has repeated that the detainees would move to Uruguay as “free men”.

But Washington usually requests that the receiving country monitor the transferred men and ban them from travelling abroad, measures which are beyond Uruguay’s refugee legislation.

In other words, the same fears which have prevented shutting Guantánamo for good, releasing the innocents and bringing evidence-based suspects to U.S. courts have also obstructed the transfers to Uruguay.

The U.S. “needs assistance from other countries in order to close Guantanamo because, as appears to be the case in Uruguay too, irrational fear about transferring detainees to the U.S. is being used for political gain in the U.S. elections,” said Laura Pitter, Human Rights Watch’s senior national security researcher.

“There is no reason whatsoever to fear letting these men come to Uruguay,” she told IPS by email. “The U.S. is letting them out because they pose no danger to the U.S. or Uruguay or any other country… They are accused of absolutely no wrongdoing and have never been charged with any crime.”

In an August interview with this reporter, the director of the Presidency’s Human Rights office, Javier Miranda, said Uruguayan society “harbours some fear of Muslims, and this is part of our growth. Some people have shown this assimilation of Islam and terrorism, which is an utterly false assumption.

“Those men who spent 12 years in a hole in Guantánamo, almost as disappeared persons, have the same right to a shelter as the Syrian refugees,” added Miranda, who successfully supervised the Oct. 9 arrival of a first group of 43 civilians who had fled the Syria civil war and were living in hard conditions in Lebanon.

But the Mujica administration’s failure to publicise the details of this second humanitarian operation and the legal plight and health of every one of the six inmates fuelled rather than assuaged public mistrust.

While 66 percent of one survey’s respondents supported the resettlement of Syrian refugees, the number who rejected the arrival of Guantánamo detainees rose from 50 percent in April to 58 percent in September.

Last month, The New York Times reported that Vice President Joe Biden had called Mujica, “pressing him to resettle the men”. Montevideo swiftly denied any pressure, and stated only Mujica had the authority to decide when the inmates should arrive. But the move paved the way for a heated electoral debate on this issue.

The centre-right opposition National Party, which is polling in second place, took advantage of this inconsistency and accused the government of acting “under pressure of imperialism”.

According to Pitter, Uruguay would do a great service “acknowledging that they recognise the human dignity and human rights of these men, and righting a grave injustice that the U.S. has perpetrated upon them for many years.”

The U.S. will hold elections in November. If the governing Democratic Party fails to retain a majority in the Senate, Republican opposition could add further obstacles to closing Guantánamo.

In the face of this political dysfunction, the best hopes to end the humanitarian crisis will continue to rest on the good will of third countries.

In Uruguay, the Broad Front is confronting its most competitive elections since it first came to power in 2004. After repeating that he alone would decide about Guantánamo, Mujica backtracked last week and announced he would hand over the decision to the incoming elected president.

If the Broad Front wins the election, a few inmates can still dream of travelling to South America before the end of the year. But if the winner is the National Party, Washington might have to re-open the agreement with the new government, no earlier than March 2015.

And for some of the prisoners, it could be too late.