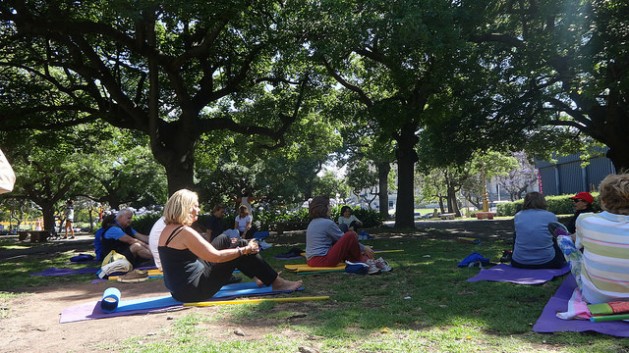 Elderly people exercising in a city square as part of the municipal programme Healthy Stations in public parks in Buenos Aires, where health controls are also offered for people over 60. Credit: Fabiana Frayssinet/IPS

BUENOS AIRES, Dec 9 2014 (IPS) - The eternally young Latin America is also ageing, due to the rise in life expectancy and the drop in birth rates – a demographic revolution that poses new challenges in a region that has begun to move slowly away from its status as the most unequal part of the world.

“The ageing of the population is good news to the extent that life expectancy rises and quality of life improves,” said María Julieta Oddone, the director of the Ageing and Society Programme of the Latin American Faculty of Social Sciences (FLACSO).

The population of Latin America ballooned from 161 million in 1950 to 512 million in 2000, and is projected to climb to 734 million in 2050 before falling to 687 million in 2100, according to the report released in November by the Santiago-based ECLAC.

The regional United Nations agency attributes the population increase partly to the fact that life expectancy rose 23 years in the region, from 55.7 years in the period 1950-1955 to 74.7 years in 2010-2015. In the first five years of this century, life expectancy was 10 years below the average of industrialised countries; that difference has shrunk in the current five-year period to just five years.

The other decisive factor is the drop in the regional birth rate, which went from one of the highest in the world, nearly six children per woman, to 2.2 per woman, even lower than the global average of 2.3.

“There have always been old people in society. But this is the first time in the history of the world that societies are old,” said Oddone, who prefers to refer to “old people” because “old age is not the same thing as decrepitude or death. Today most old people are active, healthy, and have a lot of potential.”

The ageing of Latin America, which continues to be denied in academic and scientific circles because “the idea that we are still a young society continues to prevail…requires a different way of looking at things,” according to Oddone, who is also a researcher at Argentina’s National Scientific and Technical Research Council (CONICET).

She said a new approach is needed with respect to the adoption of public policies in health, social security, protection, education, recreation and community activities, targeting these new “young old people.”

“The fact that people live over half of their lives as ‘old people’ – and the outlook for living 30 years after retirement – implies major social changes,” she added.

As an example, Oddone cited the need for health measure that take into account not only illnesses typical of children or young people, but also chronic or degenerative ailments, which are much more widespread and common now.

“The increase in the size of the older population isn’t necessarily a disaster for the health system, that’s one of the myths, but it has to be prepared for it,” she added.

Public policies, she said, have to take into consideration the new reality of families who need more support when it comes to caring for their elderly members, or the new reality of older adults who play a more active role taking care of their grandchildren.

She pointed out that many become impoverished and more vulnerable, and that living longer and having fewer children, or none, means they sometimes have to sell their homes to cover their living expenses.

“I believe that awareness is lacking about the magnitude of the changes implied by society’s decision to become old…when it was society’s wish to reach that state,” she said.

Andrés Hatum, an expert on “human behaviour in organisations” at the IAE Business School, sees things in a more pessimistic light, and referred to what he called “this worrisome news.”

“We would need more expansive demographic growth to permit economic growth,” he said.

In terms of education, Hatum said it was necessary to redistribute budget funds. For example, instead of opening so many universities for young people, more academic institutions targeting older adults, for lifelong learning, should be created.

ECLAC, for its part, sees a big opportunity to improve education. The reduction of the child and adolescent population in proportional terms will make it easier to extend to everyone in those two groups the benefits of high-quality education which in the past only a small minority benefited from, the U.N. agency says.

Hatum also believes it is necessary to raise the age of retirement so pension systems don’t “explode,” and to come up with flexible working arrangements, with variables “that also make sense for employers.”

“Maybe one way would be for people to work fewer hours as they get older, so they can also enjoy free time,” he said.

In Hatum’s view, factories will have to adapt to a new labour force over 45 years old, on one hand more experienced, patient and perfectionist, but on the other less flexible and with less physical strength and worse eyesight.

The expert described as “old-fashioned” the business model that “supposes that people should receive wage hikes and promotions based on their age, and later leave when it’s time to retire,” which encourages their older employees to retire early.

“There are many countries where people find themselves without a job before retirement age and they have a hard time reinserting themselves. We [Latin Americans] are in that transition,” he said.

Oddone said the issue is complex. She noted that in countries like Argentina, two-thirds of people of retirement age want to retire and automation not only expels older people from the job market but also makes it hard for many young people to find work.

“At a time when the labour market is becoming more flexible, age discrimination is beginning at younger and younger ages,” she said.

“But I believe anyway that the labour market will have to find ways to retain people longer, or at least to employ more of those people, who can contribute something with their skills and experience,” she added.

Active people with an interest in living, like Silvia Schabas, a 75-year-old from Argentina, who is in good health and is very cultured, believes she could use her knowledge today better than ever.

“The labour market is very limited, they only want young people when it comes to formal sector jobs,” the former teacher, who lives in the Peruvian capital, told IPS.

Schabas began to learn how to use a computer and social networks, with the help of her grandchildren.
“As the years went by, when I discovered that if I didn’t learn how to make my way in that ‘unknown, mysterious world’, I would be ‘left out of the world’, I shouted ‘help!’,” she joked.

Schabas suggested there is a need for “timely, friendly, personalised public healthcare with specialists in geriatrics,” and also recommended expanding cultural or sports activities in parks.

But above all, she said, people should remember that the elderly were once young themselves.

“Youth doesn’t last your whole life long, and no one knows what their old age will be like, which means we are kind of a mirror for their future as older adults, senior citizens or whatever euphemism people like to use,” said Schabas, who added that she is part of a new generation of “grandmothers who no longer do ‘punto de cruz’ [cross-stitching], but punto.com”.