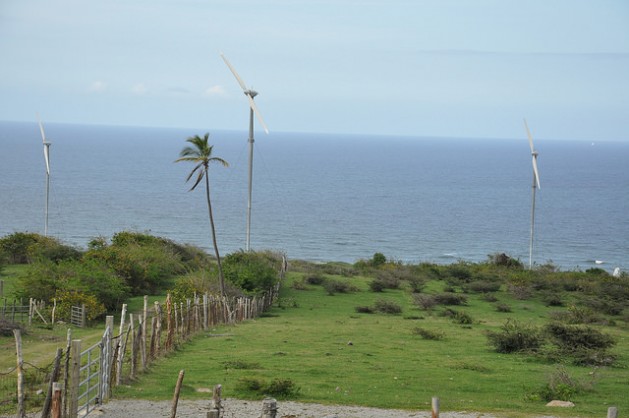 In 2010, the 13-kilometre-long island of Nevis launched the first-ever wind farm to be commissioned in the OECS with a promise to provide jobs for islanders, a reliable supply of wind energy, cheaper electricity and a reduction in surcharge and the use of imported oils. Credit: Desmond Brown/IPS

BASSETERRE, St. Kitts, Jan 13 2015 (IPS) - The Caribbean nation of St. Kitts and Nevis, on a quest to become the world’s first sustainable island state, has taken a giant leap in its programme to cut energy costs.

Last week, the government broke ground to construct the country’s second solar farm, and Prime Minister Dr. Denzil Douglas told IPS his administration is “committed to free the country from the fossil fuel reliance” which has burdened so many nations for so very long.

“This farm will reduce the amount of carbon dioxide that St. Kitts and Nevis pumps into the atmosphere. It will move forward our country’s determination to transform St. Kitts and Nevis into a green and sustainable nation." -- Prime Minister Dr. Denzil Douglas

Douglas said the aim is “to harness the power of the sun – a power which nature has given to us in such great abundance in this very beautiful country, St. Kitts and Nevis.

“The energy generated will be infused into the national grid, and this will reduce SKELEC’s need for imported fossil fuels,” he said, referring to the state electricity provider.

Electricity costs more than 42.3 cents per KWh in St. Kitts and Nevis.

Meanwhile, as environmental sustainability gains traction in the Caribbean, the executive director of the United Nations Environment Programme (UNEP), Achim Steiner, said the region is on the right track to better integrate environmental considerations into public policies.

“I think in some respects it is in the Caribbean that we are already seeing some very bold leadership,” Steiner told IPS.

“The minute countries start looking at the implications of environmental change on their future and the future of their economies, you begin to realise that if you don’t integrate environmental sustainability, you are essentially going to face, very often, higher risks and higher costs and perhaps the loss of assets.” He said such assets could include land, forests, coral reefs or fisheries. Caribbean coral reefs have experienced drastic losses in the past several decades and this has been cited by numerous studies as the primary cause of ongoing declines of Caribbean fish populations. Fish use the structure of corals for shelter and they also contribute to coastal protection.

It has been estimated that fisheries associated with coral reefs in the Caribbean region are responsible for generating net annual revenues valued at or above 310 million dollars.

Antigua and Barbuda’s Prime Minister Gaston Browne said his government will not be left behind in pursuit of a policy of reducing the carbon footprint by incorporating more renewable energy into the mix.

“Barbuda will become a green-energy island within a short period, as more modern green technology is installed there to generate all the electricity that Barbuda needs,” Browne, who’s Antigua Labour Party formed the government here in June 2014, told IPS.

“My government’s intention is to significantly reduce Antigua’s reliance on fossil fuels. A target of 20 percent reliance on green energy, in the first term of this administration, is being pursued vigorously.”

The International Renewable Energy Agency (IRENA) released a new report Monday which provides a plan to double the share of renewable energy in the world’s energy mix by 2030.

IRENA’s renewable energy roadmap, REmap 2030, also determines the potential for the U.S. and other countries to scale up renewable energy in the energy system, including power, industry, buildings, and the transport sector.

“This report adds to the growing chorus of studies that show the increasing cost competitiveness and potential of renewable energy in the U.S.,” said Dolf Gielen, director of IRENA’s Innovation and Technology Centre.

“Importantly, it shows the potential of renewables isn’t just limited to the power sector, but also has tremendous potential in the buildings, industry and transport sectors.”

Next week, efforts to scale up global renewable energy expansion will continue as government leaders from more than 150 countries and representatives from 110 international organisations gather in Abu Dhabi for IRENA’s fifth Assembly.

After spending the better part of 25 years trying to understand the threat of global warming, manifesting itself in greenhouse gas emissions and carbon dioxide emissions, the UNEP executive director said only slowly are we beginning to realise that in trying to address this threat we’re actually beginning to lay the tracks for what he calls “the 21st century economy” – which is more resource efficient, less polluting, and a driver for innovation and utilising the potential of technology.

“So you can take that track and say climate change is a threat or you can also say out of this threat arise a lot of actions that have multiple benefits,” Steiner said.

“We also have to realise that in a global economy where most countries today are faced with severe unemployment and, most tragically, youth unemployment, we need to start also looking at a transition towards a green economy as also an opportunity to make it a more inclusive green economy.”

Steiner said one of the core items that UNEP would like to see much more work on is a better understanding of how countries can reform their taxation system to send a signal to the economy that they want to drive businesses away from pollution and resource inefficiency.

At the same time, the UNEP boss wants countries to also address unemployment.

“So we need to reduce this strange phenomenon that we call income tax which makes labour as a factor of production ever more expensive,” Steiner said.

“So shifting from an income tax revenue base for governments towards a resource efficiency based income or revenue generating physical policy makes sense environmentally. It maintains the revenue base of governments and it also increases the incentive for people to find jobs again. It’s complex in one sense but very obvious in another sense.”