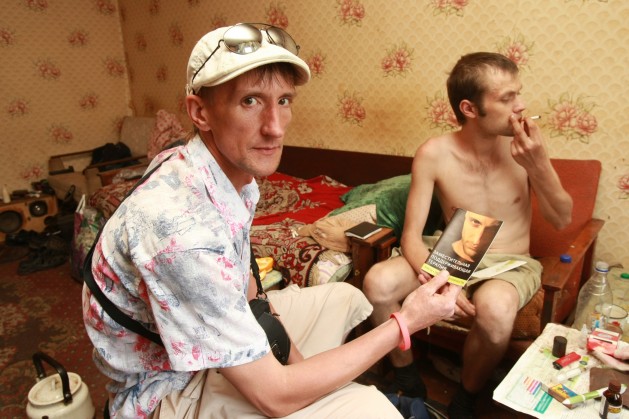 Social worker in the flat of a drug addict in Donetsk doing outreach work. Drug addicts, like other marginalised groups, including Roma, are victims of the collapse of the health system in East Ukraine. Credit: Natalia Kravchuk/International HIV/AIDS Alliance Ukraine©

KIEV, Jan 28 2015 (IPS) - With international organisations warning that East Ukraine is on the brink of a humanitarian catastrophe as its health system collapses, marginalised groups are among those facing the greatest struggle to access even basic health care in the war-torn region.

The conflict between pro-Russian separatists and Ukrainian forces has affected more than five million people, with 1.4 million classified by the World Health Organisation (WHO) and human rights bodies as “highly vulnerable” because of displacement, lack of income and a breakdown of essential services, including health care.

A complete lack of vaccines is threatening outbreaks of diseases such as polio and measles, while there are concerns for HIV/AIDS and TB sufferers as supplies of vital medicines dry up and disease monitoring becomes almost impossible.

Massive internal displacement because of the conflict – latest U.N. estimates are of 700,000 internally displaced persons (IDPs) with the figure rising by as much as 100,000 per week – has also left hundreds of thousands living in sometimes desperate and unhygienic conditions, creating a further health risk and the chance that infectious diseases, such as TB, will spread.

But while there is a threat to healthcare provision from collapsing resources, some in the region are facing extra barriers to accessing health care.

Ukraine has one of the worst HIV/AIDS epidemics in the world and the spread of the disease has been fuelled mainly by injection drug use. But, unlike in many Eastern European states, the country has been running for more than a decade an internationally lauded range of harm reduction programmes which have been credited with checking the disease’s spread.

These have included opioid substitution therapy (OST) programmes available to drug users across the country. These are particularly important in East Ukraine because the majority of Ukraine’s injection drug users come from the Luhansk and Donetsk regions.

But local and international organisations working with drug users say that addicts’ access to life-saving treatment in those areas has come under increasing pressure since the start of the conflict and that it could be cut off entirely within weeks as supplies of methadone and buprenorphine used in the treatment run out and cannot be replaced.

The International HIV/AIDS Alliance Ukraine which runs many OST centres as well as other harm reduction programmes, has said that stocks of antiretroviral drugs, OST and other life-saving treatments will have run out by  February.  More than 300 OST patients in Donetsk and Luhansk have lost access to treatment since the conflict began, while a further 550 patients on methadone will run out of drugs soon if emergency supplies cannot be delivered.

U.N. officials in close contact with international organisations helping drug users as well as doctors in Donetsk have confirmed to IPS that clinics have only a few weeks’ worth of stocks of methadone left.

One doctor in Donetsk working on an OST programme, who asked not to be named, told IPS:  “There are serious problems with medicine supplies. The last shipments came in September last year and some patients have already had to finish their treatments. Many had been on it for a decade and in that time had forged new lives, put their, sometimes criminal, past behind them and had families. It was absolutely tragic for them when they stopped.”

It is unclear what will happen to all those no longer able to access OST treatment. Doctors say some have gone into detoxification, while others have moved to other cities in safer areas of Ukraine in the hope of continuing OST.

But with 60 percent of those receiving OST also being HIV positive, according to the Donetsk doctor, and reports that many are now turning to illicit drugs and needle-sharing again as access to OST is cut off, there are concerns that the disease, along with Hepatitis C which is rife among injection drug users, and tuberculosis, could be spread, and that the lives of many drug users will again be at risk.

OST patient Andriy Klinemko, who was forced to flee Donetsk with his wife when their house was destroyed in bombing last summer and who is now in Dnipropetrovsk in central Ukraine, told IPS: “OST patients in East Ukraine are being forced to move, but not all of them can and even those that make it to other regions may not be able to continue OST because there is no money left to run such programmes. It’s a bad situation and at the moment I really can’t see any way it’s going to get better.”

But drug users are not the only marginalised community struggling to access health care.

Historically, the estimated 400,000-strong Roma community in Ukraine has, like Roma in many other Eastern European states, faced widespread discrimination in society, including in employment and education.

They have also always had limited access to healthcare because many Roma lack official ID documentation which makes it difficult for many to obtain official health care, while widespread poverty also means services and medicines which require any payment are also inaccessible to most. Meanwhile, many Roma settlements are in remote locations, far away from the nearest health centres.

Dr Dorit Nitzan, head of the WHO’s Ukraine Office, told IPS: “Even before the conflict, Roma in Ukraine had limited access to curative and preventive health service. As a result, Roma children have extremely low vaccination coverage. Moreover, rates of tuberculosis and other communicable and non-communicable diseases are higher among Roma than in the general population.”

Discrimination is also a problem. Zola Kondur of the Chiricli Roma rights group in Ukraine, told IPS: “In terms of healthcare, Roma are among the most vulnerable in the country. They are treated badly because of their ethnicity.”

However, the problems for Roma have dramatically worsened since the conflict began. Some human rights groups have said that since the separatist regimes took power in the region, Roma have faced systematic violent and sometimes fatal repression.

by the Kharkiv Human Rights Protection Group, Roma living in separatist-controlled areas have been “subjected to open aggression from militants ….[who] have carried out real ethnic cleansing” against them. Many have fled and become IDPs, subsequently facing health struggles.

Dr Nitzan said: “As in every crisis, if not given special attention, marginalised and vulnerable groups are at higher risk. In Ukraine, many Roma lack civil documentation, and thus cannot be registered as internally displaced persons and are not included in the provision of any health services.

“Moreover, their inability to pay ‘out-of-pocket’ limits their ability to procure medication and/or services. Compounding this is that many Roma IDPs are residing at the margins of society, in remote geographical locations, where no services are available. All of these factors make health services inaccessible to Roma.”

Local rights groups say that Roma who have managed to flee to safe areas have often ended up homeless and starving after facing problems accessing aid because of a dismissive attitude from volunteers and staff at social institutions, while their lack of identification documents also prevented them from accessing any official help.

However, even those who have managed to find treatment have sometimes faced further problems.

Kondur told IPS: “In one case a Roma family moved from Kramatorsk to Kharkiv. A little boy had a heart problem brought on by the stress of the fighting and he was taken to hospital. One night, a group of young people broke the window of the boy’s hospital room, shouting ‘Gypsies get out’. The boy had a heart attack.”