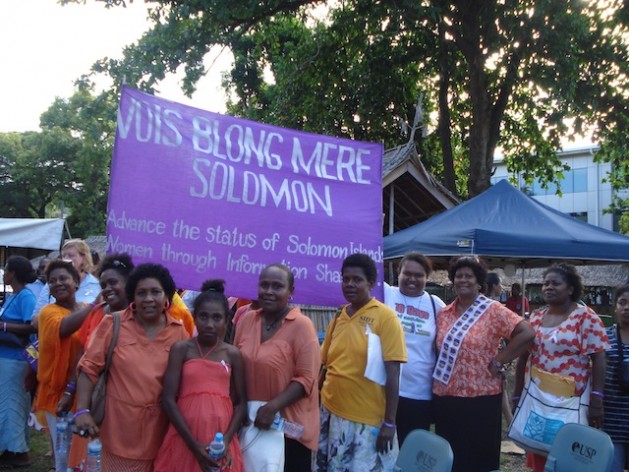 But just a week ahead of World Cancer Day, celebrated globally on Feb. 4, many say that the benefit of having advanced medical technology, in a country where mortality occurs in 59 percent of women diagnosed with cancer, depends on improving the serious knowledge deficit of the disease in the country.

"While cancer is included on the NCD [non-communicable diseases] list, very little attention and resources are specifically addressing women and breast cancer awareness." -- Dr. Sylvia Defensor, senior radiologist at the Ministry of Health and Medical Services in Fiji
“Breast cancer is a health issue that women are concerned about in the Solomon Islands, but adequate awareness of it among women is not really prioritised,” Bernadette Usua, who works for the local non-governmental organisation, Vois Blong Mere (Voice of Women), in the capital, Honiara, told IPS.

Rachel, a young 24-year-old woman living with her two children, aged three and five years, in one of the country’s many rural villages, did not know what breast cancer was when she detected a lump in her breast in August 2013.

But the lump grew larger prompting her to travel to Honiara several months later to see a doctor.

“She went to the central hospital and was advised to have her left breast removed, but due to the little knowledge that she and her husband had about what it would be like, both were afraid of the surgery,” Bernadette Usua, who is Rachel’s cousin, recounted.

“So they just left the hospital without any medication or other assistance, and went home,” she continued.

Rachel tried traditional medicine available in her village, but the cancer and pain became more aggressive. Usua remembers next seeing her cousin in July of last year.

“She was sitting on her bed night and day with extreme pain, unable to lie down and sleep. But she was still brave as she nursed herself, washed herself and cooked for her children. She cried and prayed until she passed away in September,” Usua recalled.

Breast cancer is the most common cancer in women worldwide and in the Solomon Islands, where it accounted for 92 of more than 200 diagnosed cases in 2012. But its incidence in the developing world, where 50 percent of cases and 58 percent of fatalities occur, is rapidly rising.

Low survival rates of around 40 percent in low-income countries, compared to more than 80 percent in North America, are due mainly to late discovery of the disease in patients and limited diagnosis and treatment offered by under-resourced health centres.

Last year Annals of Global Health revealed that of 281 cancer cases identified in women in the Solomon Islands in 2012, 165 did not survive, while in Papua New Guinea and Fiji fatalities occurred in 2,889 of 4,457, and 418 of 795 diagnosed cases, respectively.

Insufficient public knowledge about the disease is an issue across the region.

“Currently public health education and promotion is focussing heavily on the control of NCDs [non-communicable diseases] as a whole. While cancer is included on the NCD list, very little attention and resources are specifically addressing women and breast cancer awareness,” said Dr. Sylvia Defensor, senior radiologist at the Ministry of Health and Medical Services in Fiji, a Pacific Island state home to over 880,000 people.

In the Solomon Islands, mammograms, or x-rays of the breast, will now be free to all female citizens who comprise about 49 percent of the population of more than 550,000. This is after installation of digital mammography equipment, funded by the national First Lady’s Charity, in Honiara’s National Referral Hospital.

Dr. Douglas Pikacha, general surgeon at the hospital, explained that mammograms were vital to early detection of breast disease and the saving of women’s lives through early treatment, such as surgery and chemotherapy.

Mammography is considered the most effective form of breast cancer screening by the World Health Organisation (WHO), with some evidence that it can reduce subsequent loss of life by an estimated 20 percent, especially in women aged 50-70 years.

But with more than 80 percent of the population residing in rural areas and spread over more than 900 different islands, Josephine Teakeni, president of Vois Blong Mere, is deeply concerned about the fate of many women who are located far from the main health facilities in the capital. An estimated 73 percent of doctors and all medical specialists in the country are based at the National Referral Hospital.

She says that reliable breast cancer screening and diagnosis is urgently needed in provincial hospitals if the mortality rate is to be reduced. Most patients must travel an average of 240 kilometres to reach the National Referral Hospital, commonly by ferry or motorised canoe, given the prohibitive expense of internal air services.

There is also a critical shortage of health care workers in the country with 0.21 doctors per 1,000 people and Teakeni claims that “while waiting for an operation the delay can result in full advancement of the cancer and death.”

However, there is a further challenge with almost half of all women diagnosed with breast cancer refusing a mastectomy, which involves the partial or entire surgical removal of affected breasts, even though it may result in the patient’s recovery, the Ministry of Health reports.

“Many prefer traditional treatment to mastectomy because they believe it is more womanly to have their breast than to live without it,” Pikacha said.

The high risk of cancer mortality is another factor impacting gender inequality in the Pacific Island state where entrenched cultural attitudes and widespread gender violence, experienced by 64 percent of women and girls, hinders improvement of their social and economic status.

Teakeni believes that an urgent priority is dramatically improving “awareness among women about the signs and symptoms of breast cancer, and even simple tests that women can do themselves, such as checking the breast for lumps while having a shower,” as well as the importance and impact of medical treatment.

Still, the installation of the new mammogram machine gives women on this island something, however small, to celebrate.