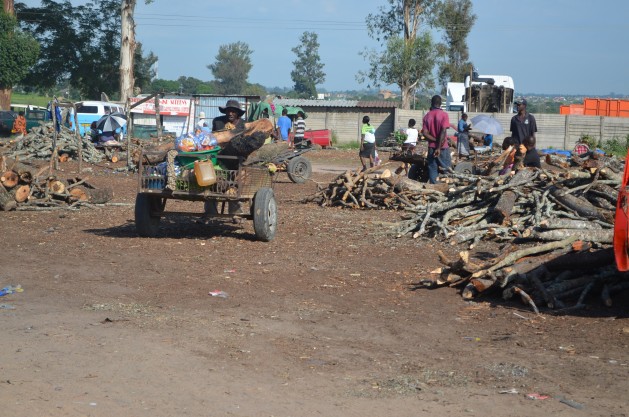 Wood market in Chitungwiza. Twenty percent of the urban households in Zimbabwe do not have access to electricity, and rely mainly on firewood for their energy needs. Credit: Tonderayi Mukeredzi/IPS

HARARE, Jan 27 2015 (IPS) - Janet Mutoriti (30), a mother of three from St Mary’s suburb in Chitungwiza, 25 kilometres outside Zimbabwe’s capital, Harare, frequently risks arrest for straying into the nearby urban forests to fetch wood for cooking.

Despite living in the city, Janet’s is among the 20 percent of the urban households which do not have access to electricity, and rely mainly on firewood for their energy needs.

Worldwide, energy access has become a key determinant in improving people’s lives, mainly in rural communities where basic needs are met with difficulty.

In Zimbabwe, access to modern energy is very low, casting doubts on the country’s efforts at sustainable development, which energy experts say is not possible without sustainable energy.

In an interim national energy efficiency audit report for Zimbabwe issued in December, the Sustainable African Energy Consortium (SAEC) revealed that of the country’s slightly more than three million households, 44 percent are electrified.

“In rural Zimbabwe, the economic driver is agriculture, both dry land and irrigated. The need for energy to improve productivity in rural areas cannot be over-emphasised but current power generated is not sufficient to support all the energy-demanding activities in the country” – Chiedza Mazaiwana, Practical Action Southern Africa

According to SAEC, of the un-electrified households, 62% percent use wood as the main source of energy for cooking, especially in rural areas where 90 percent live without access to energy.

Rural communities meet 94 percent of their cooking energy requirements from traditional fuels, mainly firewood, while 20 percent of urban households use wood as the main cooking fuel. Coal, charcoal and liquefied petroleum gas are used by less than one percent.

Engineer Joshua Mashamba, chief executive of the Rural Electrification Agency (REA) which is crusading the country’s rural electrification programme, told IPS that the rate of electrification of rural communities was a mere 10 percent.

“As of now, in the rural areas, there is energy poverty,” he said. “As the Rural Electrification Agency (REA), we have electrified 1,103 villages or group schemes and if we combine that with what other players have done, we are estimating that the rate of rural electrification is at 10 percent. It means that 90 percent remain un-electrified and do not have access to modern energy.”

“The prevalence of energy of poverty in Zimbabwe cuts across both urban and rural areas. The situation is very dire in peri-urban areas due to deforestation and the non-availability of modern energy services,” said Sithole.

“Take Epworth [a poor suburb in Harare] for example. There are no forests to talk about and at the same time you cannot talk of the use of liquefied petrol gas (LPG) there due to costs and lack of knowledge. People there are using grass, plastics and animal dung to cook. It’s very sad,” he noted.

Sithole said there was a need to recognise energy poverty as a national challenge and priority, which all past and present ministers of energy have failed to do.

Zimbabwe currently faces a shortage of electrical energy owing to internal generation shortfalls and imports much its petroleum fuel and power at great cost to close the gap.

“In rural Zimbabwe, the economic driver is agriculture, both dry land and irrigated. The need for energy to improve productivity in rural areas cannot be over-emphasised but current power generated is not sufficient to support all the energy-demanding activities in the country. The percentage of people relying entirely on biomass for their energy is 70 percent,” she adds.

According to the World Bank, access to electricity in Southern Africa is around 28 percent – below the continental average of 31 percent. The bank says that inadequate electricity access poses a major constraint to the twin goals of ending extreme poverty and boosting shared prosperity in the region.

To end the dearth of power, Zimbabwe has joined the global effort to eliminate energy poverty by 2030 under the United Nation’s Sustainable Energy for All (SE4ALL) initiative.

The country has abundant renewable energy sources, most of which are yet to be fully utilised, and energy experts say that exploiting the critical sources of energy is key in closing the existing supply and demand gap while also accelerating access to green energy.

By 2018, Zimbabwe hopes to increase renewable energy capacity by 300 MW.

Mashamba noted that REA has installed 402 mini-grid solar systems at rural schools and health centres, 437 mobile solar systems and 19 biogas digesters at public institutions as a way to promote modern forms of energy.

A coalition of civil society organisations (CSOs) led by Zero Regional Environment Organisation and Practical Action Southern Africa is calling for a rapid increase in investment in energy access, with government leading the way but supported in equal measure by official development assistance and private investors.

Though the current output from independent power producers (IPPs) is still minimal, the Zimbabwe Energy Regulatory Authority (ZERA) says that contribution from IPPs will be significant once the big thermal producers come on stream by 2018.

At the end of 2013, the country had 25 power generation licensees and some of them have already started implementing power projects that are benefitting the national grid.

Notwithstanding the obvious financial and technical hitches, REA remains optimistic that it will deliver universal access to modern energy by 2030.

For CSOs, achieving universal access to energy by 2030 will require recognising the full range of people’s energy needs, not just at household level but also enterprise and community service levels.

“Currently there is a lot of effort put in to increasing our generation capacity through projects such as Kariba South Extension and Hwange extension which is good and highly commended but for us to reach out to the rural population (most affected by energy poverty, according to our statistics, we should also increase efforts around implementing off grid clean energy solutions to make a balance in our energy mix,” says Joseph Hwani, project manager for energy with Practical Action Southern Africa.

Practical Action says that on current trends, 1.5 billion people globally will still lack electricity in 2030, of whom 650 million will be in Africa.

This is some fifteen years after the target date for meeting the Millennium Development Goals (MDGs), which cannot be met without sustainable, affordable, accessible and reliable energy services.