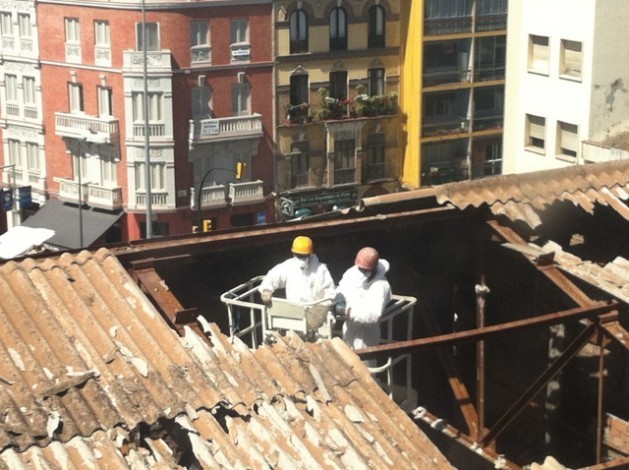 Two workers engaged in the removal of asbestos on the roof of a building where a cinema used to operate in the centre of the southern Spanish city of Málaga, in May 2014. Credit: Courtesy Plataforma Málaga Amianto Cero

MÁLAGA, Spain , Feb 17 2015 (IPS) - “I would get asbestos in my mouth, spit it out and carry on working,” said 52-year-old Francisco Padilla. Exposure to this deadly mineral fibre over most of his working life has resulted in cancer and the removal of his left lung, the lung lining and part of his diaphragm.

Sitting on the sofa in his home in the southern Spanish city of Málaga, Padilla told Tierramérica with watering eyes that he has always looked after his health and has never smoked.

He used to cycle to and from the workshop where he has worked since the age of 18, until in May 2014 he was diagnosed with mesothelioma, an aggressive malignant tumor linked to occupational exposure to asbestos, and had to undergo radical surgery three months ago.

“Thousands of people have died, are dying and will die in the future because of asbestos....its effects have been overwhelmingly silenced.” -- Activist Francisco Puche

The use of asbestos, a low-cost fire retardant and insulating material, was banned in Spain in 2002. Previously, however, it was widely used in construction, shipbuilding, and the steel, automotive and railway industries, among others.

Workers in these industries were at risk of contracting mesothelioma, lung cancer and asbestosis, whose symptoms could take 20 to 40 years to develop.

“Thousands of people have died, are dying and will die in the future because of asbestos. It is the great unknown factor, and its effects have been overwhelmingly silenced,” activist Francisco Puche of Málaga Amianto Cero, an anti-asbestos alliance, told Tierramérica.

Puche believes Europe should have “a plan for safe asbestos removal,” because the risk continues in spite of the bans.

He pointed out several water tanks made of cement containing asbestos fibres on the rooftop of a building in a central Málaga square, and warned that in their everyday lives, people are caught in a hazardous “spiderweb” of asbestos.

It is present in thousands of kilometres of water pipes, public and private buildings, warehouses, tunnels, machinery, ships and trains, although it is being progressively replaced by other materials.

Puche warned of the dangers involved in the deterioration and modification of structures containing asbestos, which breaks down into rigid microscopic fibrils that accumulate in the body by inhalation or ingestion. 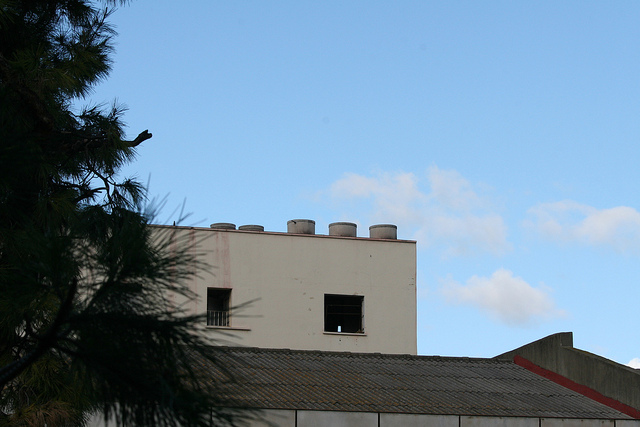 Asbestos is banned in 55 countries, including the 28 members of the European Union, Argentina, Chile, Honduras and Uruguay. But more than two million tonnes a year are still being extracted worldwide, mainly in China, India, Russia, Brazil and Kazakhstan, according to the International Ban Asbestos Secretariat.

Every year 107,000 people worldwide die of lung cancer, asbestosis and mesothelioma linked to occupational exposure to asbestos, according to the World Health Organisation (WHO).

WHO estimates that 125 million people are in contact with asbestos in the workplace, and attributes thousands of other deaths a year to indirect contact with the material in the home.

“The asbestos issue shows the true face of a system that is only interested in profits,” said Puche, who is critical of “big business,” powerful lobbies linked to asbestos mining, and the “impunity” surrounding the illness and death of workers in Europe and around the world.

Swiss billionaire Stephan Schmidheiny, the former CEO of Eternit, a family business that set up asbestos factories across the globe in the 20th century, had been sentenced to 18 years in prison and payment of nearly one million euros (1.14 million dollars) in damages to thousands of victims. However his sentence was overturned by Italy’s highest court on Nov. 19, on the grounds that the statute of limitations had expired.

“The other day I heard that a retired workmate of mine had died of mesothelioma,” José Antonio Martínez, the head of the Málaga Asbestos Victims’ Association (AVIDA Málaga), told Tierramérica.

Many workers die before the occupational nature of their ailment is recognised, and they are deprived of their right to disability pensions and compensation for damages.

Francisco González , a worker with the state railway company RENFE, died in 2005 at the age of 55 from mesothelioma. His daughter Anabel told Tierramérica that she and her mother finally achieved an indemnity payment after “a long struggle, without any help and against many obstacles.”

Being vindicated was more important than the money,” she said, even though it took five years after her father’s death.

In Spain and other countries, asbestos victims and their families are forming associations for information, mutual support and justice. AVIDA Málaga was created in June 2014; it has nearly 200 members, and is part of the Spanish Federation of Associations of Asbestos Victims.

Victims are demanding the creation of a compensation fund for those affected, like ones that have been set up in Belgium and France, paid for by the state and the companies concerned, which often refuse to shoulder responsibility retroactively.

Asbestos was used for decades in more than 3,000 products, so even today plumbers, electricians, building demolition and maintenance workers and car mechanics may come across this hazardous material in the course of their jobs, facing health risks if they fail to take precautions.

Padilla, who has a 29-year-old son, is still waiting for confirmation of his occupational injury pension and plans to claim compensation. By law, he has up to one year to do so from May 2014, when he was diagnosed with an ailment on the list of occupational diseases.

His company recognised his cancer as a work-related illness without his having to resort to litigation. This made legal history in Spain, where many people die without getting justice.

Padilla had chemotherapy before his major surgery, and is now undergoing radiotherapy. His wife, Pepi Reyes, who attends these sessions with him, has been advised by the doctor to have medical tests herself, because she handled her husband’s work clothes for years.

A study by the European Union reports that half a million people are expected to die of mesothelioma and lung cancer by 2030, due to occupational exposure to asbestos in the 1980s and 1990s. The study analyses mortality in France, Germany, Italy, the Netherlands, Switzerland and the United Kingdom.

Francisco Báez, a former worker for the transnational company Uralita in the southern Spanish city of Seville, is the author of the book “Amianto: un genocidio impune” (Asbestos: an unpunished genocide). He complained to Tierramérica about the double standards applied by countries that prohibit the material within their borders, yet abroad “they promote its use and profit financially from the installation and maintenance of asbestos sector industries.”

Padilla opened a window in his home and pointed out the corrugated asbestos cement roofs of the warehouses opposite. Afterwards he brought out his mobile phone and showed a photo of his long operation scar, all along his left side, and said he feels lucky to be alive.