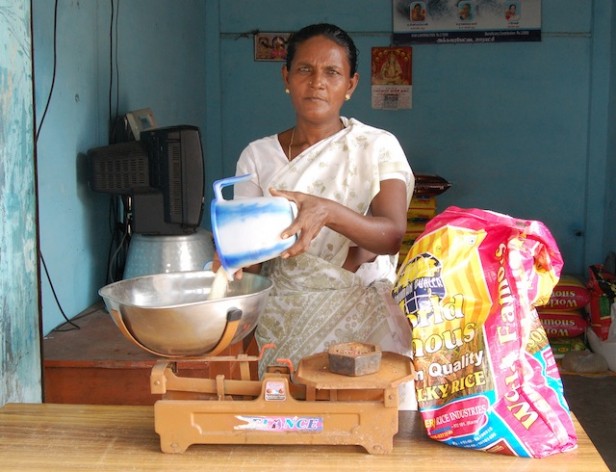 On average, women in self-help groups in a small fishing town in Tamil Nadu make about 80 dollars each month; it is just about enough to sustain fisher families, who receive free housing from the Indian government. Credit: Nachammai Raman/IPS

NAGAPATTINAM, India, Feb 12 2015 (IPS) - Geeta Selvaraj and a few other women take turns to prepare meals with just one large gas cooker in a tiny shop.

The piquant smell of masala wafts out to the crowded street to mix with plumes of vehicle exhaust and tantalize customers, who are mostly from the surrounding area of Nagapattinam, a predominantly fishing town in the southern Indian state of Tamil Nadu.

“We want self-help groups to be a tool to transform women into individual entrepreneurs. We want to build self-reliant communities." -- Senthil Kumar, reporting and monitoring officer for the International Fund for Agricultural Development (IFAD)
Selvaraj’s income from her catering business has doubled over the last few years as her fisherman husband’s shrinks. “The men are not going out to sea like before,” she tells IPS, but she seems to have come to terms with this reality. “Because we [women] work, we don’t have to ask anyone for money and it helps with the household expenses.”

India is a major supplier of fish in the world and the industry employs an estimated 14.5 million people. The sector contributes about one percent of the country’s total GDP. Nagapattinam’s long coastline makes fishing its second most important industry after agriculture. According to the National Bank for Agriculture and Rural Development, there are roughly 90,000 fishermen in what it calls the ‘fisheries capital’ of Tamil Nadu.

Traditionally, the women in the fishing community in this region stay at home or sell the fish their husbands bring back. But over the past few years, fishermen have been putting out to sea less often because of the scarcity of fish near the Indian coast and the fear of being caught by the Sri Lankan navy if they stray into the island’s territorial waters.

So, women in the community have stepped into the breach to provide for their families. They’re doing this by starting micro-enterprises and they’re the happier for it.

“Besides an income, it gives me a chance to get out of the house and interact with other people and know a little bit about what’s going on in the world,” says Selvaraj.

Nagapattinam district has a population of some 1.6 million people and a sex ratio of 1,025 women to 1,000 men. So, women form an important part of all development strategies in the district.

In a bid to weave women into the economic fabric of the region, the International Fund for Agricultural Development (IFAD) is assisting a Post-tsunami Sustainable Livelihood Programme that has given rise to thousands of micro-enterprises in the region, known locally as self-help groups.

IFAD, which is a specialised agency of the United Nations, is working with the local government. The goal is to establish at least 12,000 micro-enterprises in six coastal areas in Tamil Nadu by 2016.

“We want self-help groups to be a tool to transform women into individual entrepreneurs. We want to build self-reliant communities,” says Senthil Kumar, who is the IFAD Reporting and Monitoring Officer for the programme in Tamil Nadu.

Since the 2004 Indian Ocean tsunami, fishing in the coastal areas of Tamil Nadu has taken a big hit. The damage to the fishing industry was about 4.8 billion rupees (about 65 million dollars).

Prior to the disastrous tsunami, fishing was considered a lucrative activity by the standards here. Fishermen on average could make about 300 dollars per month. Now, they say it’s whittled down to half of that.

Firstly, it was because the fishermen had lost their boats and nets. The government offered compensation to about 17,672 affected fishermen, but even after all the equipment was repaired or replaced, the industry did not rally to its pre-tsunami days.

Then, fishermen claim, there’s less fish near the Indian coast since the tsunami, which makes them sail into Sri Lankan waters for a better catch. But the Sri Lankan Navy impounds their boats and detains the fishermen. In the past few months, this has turned into a contentious issue between the Indian and Sri Lankan governments.

“More than 80 boats have been caught by the Sri Lankan navy,” says Govindaswamy Vijayan, a fisherman who owns two fishing boats. “Today we need bigger boats to avoid crossing the international border into Sri Lankan waters and sail out to deep sea. But most fishermen can’t afford them.” With fewer men putting out to sea in the primarily fishing town of Nagapattinam in the southern Indian state of Tamil Nadu, women are stepping into the breach through micro-enterprises. Credit: Nachammai Raman/IPS

The IFAD programme was created with a view to making coastal communities less dependent on fishing. However, as the men in the community refused to consider other trades, the prime beneficiaries of the programme have turned out to be women.

Women’s self-help groups were already burgeoning in the district after the tsunami as a means of income generation.

“When there’s a disaster, women are expected to care for the family. Feeding the children or other family members becomes their first concern and they immediately start getting involved in various activities,” says Vasudha Gokhale, a Pune-based professor at the BN College of Architecture who has studied how women in Tamil Nadu’s coastal areas coped with the tsunami.

But not all these self-help groups were successful because government officials chose their core activities. “Many of the women started micro-enterprises that they had little affinity for,” says Madhavan Krishnakumar, who works for a non-governmental organisation called Avvai Village Welfare Society.

Some of the micro-enterprises that fizzled out were involved in making plastic doors, bricks and candles. Their products were initially sold under the ‘Alaimagal’ brand.

“The government gave them funding incentives, but their entrepreneurial skills were not properly developed. They were not able to do the marketing or face professional competition, so they failed,” Krishnakumar explains.

A few NGOs such as the People’s Development Association were also involved in developing micro-enterprises in the district earlier on, but have now limited themselves to skills training for youth, according to its director, Joe Velu.

“There were too many people doing it. There was a lot of duplication and overlap. We felt it was becoming too much like moneylending.”

When IFAD came into the picture six years ago, the first thing they did was to conduct a survey. “We wanted to stabilise the movement,” says Kumar. “We graded self-help groups based on their performance and found the weaknesses that needed to be addressed to make the groups viable. Then we restructured the weak ones.”

On average, the women in these self-help groups can take home about 5,000 rupees (about 80 dollars) per month, which a family of four can just about manage on thanks to the provision of free housing for fisher folk affected by the tsunami.

Revathi Kanakaraj belonged to a self-help group that was formed as far back as 2000, but it disintegrated after the tsunami. Then three years ago, she joined a new one under the IFAD umbrella. She finds it rewarding. “I’ve learned about micro-credit and I’ve learned about savings,” she tells IPS.

Financial literacy is one of the key components of the IFAD-assisted livelihood programme because its ultimate aim is to enable women to access credit on their own and encourage the habit of saving. “Previously, women in self-help groups didn’t know about interest rates and banking. But they’re managing their money very well now.”

The Tamil Nadu government reports that self-help groups across the state had a total savings of around 34 billion rupees (543 million dollars) as of 2012. Most of the women interviewed say they contribute between 20 and 120 rupees (0.32-1.92 dollars) per month.

Kasturi Ravi used to look forward to her husband’s return to shore and a nice income from the sale of the fish he had caught. But on Boxing Day ten years ago, her husband was washed back to shore dead in the devastating tidal waves that killed more than 6,000 people here, the worst affected district in India.

As she cleans dried fish for packing in a small salty-smelling shed with other members of her self-help group, she remembers how difficult it was to eke out a living after her husband’s death. She’s proud of where she is now.

She makes an average of four dollars per day. Although not a lot, it’s enough for subsistence. “I’m grateful for this because I can stand on my own feet,” she tells IPS.