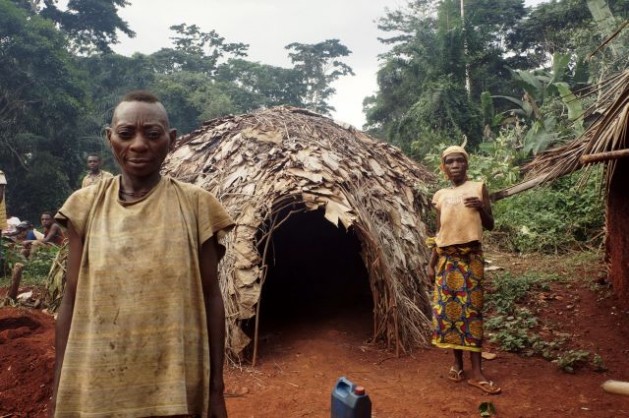 “The forest used to be for the Baka but not anymore. We would walk in the forest according to the seasons but now we’re afraid,” say the Baka of Cameroon. Credit: © Survival International

UNITED NATIONS, Mar 5 2015 (IPS) - Indigenous and wildlife conservationists have common goals and common adversaries, but seem to be struggling to find common ground in the fight for sustainable forests.

The forest lifestyle of the Baka people of Cameroon helps provide improved habitats for wild animals.

“When they harvest wild yams that grow in the forest, they always leave part of the root intact and that spreads the pockets of wild yams through the forest that elephants and wild bush pigs like,” he said.

They have “sophisticated codes of conservation” and have lived sustainably for generations following the ‘ancestor’s path’.

But pressures on the Baka’s forest home are coming from many angles; logging, mining, and illegal poaching.

On the ground, tackling wildlife crime is becoming increasingly difficult. Poachers, backed by the same international crime syndicates that traffic in drugs and people, are employing increasingly sophisticated techniques.

At the same time, forests are under increased pressure from resource exploitation. Mining and logging destroy habitats and brings thousands of workers to the forest who themselves hunt, eat and trade wild animals.

However, Survival International is concerned that although conservationists have in recent years expressed a greater commitment to working with indigenous communities, this is not always reflected on the ground.

“What these anti-poaching squads are doing, and by extension the conservation agencies that fund them, is really just focusing on the least powerful people, who are really just hunting to feed their families as they have for generations,” Hurran said.

“Often the poaching squads [that] enforce wildlife law are maybe corrupt or they don’t have much respect for the human rights of tribal people, such as the Baka,” he said.

“The Baka have told us that even when they are hunting in their special zones, using techniques which are recognised as traditional and legal and hunting just for food and not for sale, sometimes their meat is confiscated, and they are being harassed or beaten by anti-poaching squads,” Hurran added.

In a statement provided to IPS, WWF said, “On the ground, advancing the status and rights of tribal communities while also protecting the resources vital to them and the global community is extraordinarily difficult… WWF agrees that parks need people, and models such as Community Based Natural Resource Management being pursued by WWF globally over many years have ensured that many parks have people.

“WWF is open to a collaborative approach to these issues.  WWF is standing by commitments to assist a Cameroon National Human Rights and Freedom Commission investigation of alleged human rights abuses by Ecoguards and military and is reviewing field experience and our activities in support of the Baka and forest protection in Cameroon.”

“The conservation community has to be committed to partnering with indigenous people, because that’s the only way that we’re both going to find a future for wildlife, but also do it in such a way that human rights are respected and traditional societies are respected,” Deutsch said.

Deutsch, who previously led WCS’s programmes in Africa for 11 years, said that solutions were not simple and required perseverance, working with local communities on the ground.

One area both sides agree on is shortfalls in national and international laws protecting indigenous people.

WWF’s statement said that complications included “lack of official recognition in law or in practice of customary rights (and) shortfalls in knowledge, commitment and infrastructure necessary to support international human rights agendas.”

Survival International also acknowledges that national and international laws need to provide more protection to tribal people, both on paper and in practice.

“The criteria that the Baka people need to meet in order to hunt legally is very strict and unrealistic, so often they are considered poachers, when they aren’t,” Hurran said.

Speaking at a United Nations event on World Wildlife Day on Tuesday, Nik Sekhran, director of the UNDP’s Sustainable Development Cluster, said, “For many communities and for indigenous people around the world, sustainable use of wildlife and sustainable use of flora for medicines for food … is really critical to their survival.”

“It’s particularly a challenge with hunter-gatherer people,” Deutch said. “There are many cases where wildlife tourism has been created and the intention has been to benefit hunter-gatherer societies and yet in some cases it’s been difficult to make sure that the benefits go to those people because they are less able to deal with the scrum for resources that results.”