This is the second of a two-part article analysing India’s plans to double coal production by the end of this decade. The article, by Chaitanya Kumar, South Asia Team Leader of 350.org, which is building a global climate movement through online campaigns, grassroots organising and mass public actions, offers four reasons why investors and the Indian government should be really wary of investing in coal for the long run. The first part, which was run on Mar. 18, dealt with the first two reasons; this second part looks at the final two. 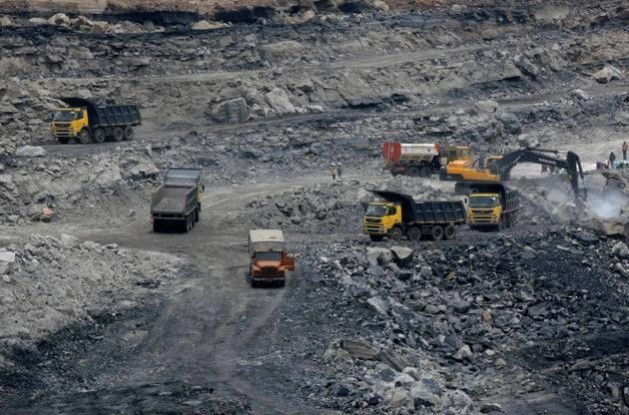 Coal mining in India. Coal-fired plants contribute 60 percent of India’s energy capacity and are a large source of the air pollution that is taking a toll on people’s health and their livelihoods. Photo credit: The Hindu

NEW DELHI, Mar 19 2015 (IPS) - In November last year, India’s power minister Piyush Goyal announced that he plans to double coal production in India by the end of this decade and, in an effort to enhance production, the Indian government has started a process of auctioning coal blocks.

Coupled with the auctions is the disinvestment of Coal India Limited (CIL), the world’s largest coal mining company, and both actions can provide short-term reprieve to India’s energy and fiscal deficit woes.

However, there are four reasons why investors and the government should be wary of investing in coal for the long run (10-15 years).

The first stems from the fact that it is rapidly becoming clear to big business and governments around the world that a large proportion of coal and other fossil fuels should be left in the ground. The second is that coal consumption is declining in many parts of the world, with economics increasingly in favour of alternate sources of energy, such as wind and solar.

“A systematic effort is now under way to dilute environmental, land and forest laws … The latest land ordinance passed by the [Indian] government has done away with two key pillars of the process of land acquisition: social impact assessment and community consent”

Reasons three and four have to do with growing resistance from tribal and grassroots communities, and the fact that India will be forced to take some form of action as air pollution becomes increasingly dangerous.

Despite its plans for coal production, the Indian government has been giving the right indicators on its pursuit of renewable energy, but this ambition – though welcome – is being counterbalanced by the country’s continued lust for more coal.

Call it an addiction that is hard to let go or sustained pressure from big corporations and their existing investments in coal, the Indian government has turned its eye on the vast domestic reserves in the country.

A systematic effort is now under way to dilute environmental, land and forest laws in the country. The latest land ordinance passed by the government has done away with two key pillars of the process of land acquisition: social impact assessment and community consent. The ordinance is facing stiff resistance from opposition parties and the general masses of India.

Any project, either private or under a public private partnership (PPP), previously required the consent of 80 percent of the community that the project impacted but no such consent is now required.

Social impact assessments that factors in effects on the environment and human health, among others, were mandatory for projects and while such assessments were shoddy in the past, doing away with them completely sets a poor precedent for industrial practices and gives even less of a reason for companies to clean up their acts.

A lack of social impact assessment also adds to the ambiguity that exists in offering the right compensation as part of the rehabilitation and resettlement plan embedded in the land ordinance.

In the context of coal, the efforts of the government to re-allocate 204 coal blocks and begin mining will be met by stiff resistance from impacted communities. “There is a fear that we will witness greater state violence on people as they begin resisting projects that have immediate impacts on their lives and livelihoods”, says Sreedhar, a former geologist who now runs a network of activists called Mines, Minerals & People.

The Mahan coal block, forcefully pursued by the Essar company, is a case in point where local communities have been resisting open cast mining for several years. The mine is located in what is one of the last remaining tracts of dense forests in central India. Mahan has subsequently been withdrawn from the auctions, a victory celebrated by the local communities.

Foreign investors are especially wary of pumping money into projects that can see resistance from local communities. The high profile cases bauxite mining plans by British resources giant Vedanta in ‘sacred’ hills in eastern India and the plans of South Korea’s POSCO steel-making multinational to open a plant in the eastern state of Odisha have become strong deterrents for big money to enter India.

While the government’s efforts at allaying fears may work, there is a difference in rhetoric and on-the-ground reality because it will not be easy to simply wish away people’s concerns.

Visible resistance has taken shape in the state of Chhattisgarh where twenty tribal gram sabhas in the Hasdeo Arand coal field area of the state passed a formal resolution under the forest rights act against coal mining in their traditional forest land.

“There has to be an assessment of India’s energy needs alongside an evaluation of the forests that we stand to lose from coal mining. Allocation of coal blocks in dense forests is imprudent,” says Alok Shukla, an activist from Chhattisgarh who is mobilising tribal communities to uphold their forest rights.

These struggles might only intensify as government efforts are aggressively under way to further dilute tribal rights and open up inviolate forests for coal mining.

As the pressure to act on air pollution builds, India will have to enforce strict emission norms on coal plants and their operators. Installing flue-gas desulphurisation scrubbers should be mandatory on any new plant that is set to operate in coming years. These devices are very effective in limiting dangerous pollutants from escaping into the atmosphere but come at a heavy cost for investors and coal power generators.

But why would the government work towards increasing operational costs for power plants in the pipeline? Here’s why – air pollution is killing Indians every year and is now the fifth largest contributor of deaths in the country. The fact that 13 of the world’s 20 most polluted cities are in India is a cause for great alarm. A study has indicated that one in three children have shown a reduction in lung function in Delhi.

The World Health Organisation (WHO) report, which makes this claim, advises that fine particles of less than 2.5 micrometres in diameter (PM2.5) should not exceed 10 micrograms per cubic metre. Delhi tops the list at 153 micrograms of PM2.5 per cubic metre and it is only getting worse.

In Delhi, for instance, coal roughly contributes 30 percent of recorded air pollution (particulate matter) and the numbers are higher in the coal clusters of the country. Coal-fired plants contribute 60 percent of India’s energy capacity and are a large source of the air pollution that is taking a toll on people’s health and their livelihoods.

A recent report on coal pollution in India by Urban Emissions and Conservation Action Trust reveals a shocking statistic – in another 15 years between 186,500 and 229,500 people may die premature deaths annually as a result of a spike in air pollution caused by coal-fired power plants.

In dealing with air pollution, curbing the effects of harmful pollutants like nitrous and sulphur oxides from coal power plants is critical and there is growing pressure on the central government to introduce strict emission standards. India is the only major coal-powered nation that does not have any concentration standards for these pollutants, a requirement that should soon be in place.

Both domestic and international pressure can move India to clean up its air. The government cannot afford to have an ‘airpocalypse’ on its hands.

All is not well with the coal industry in India

Undaunted, Narendra Taneja, energy cell convenor of India’s ruling Bharatiya Janata Party, has claimed that coal and gas will remain the mainstay of the country’s economy for the next 50-60 years.

The impossibility of this claim becomes apparent when we look at the actual reserves of extractable coal. Only one-fifth of the coal reserves of CIL are extractable and if the ambitious doubling of domestic production happens, the known reserves are expected to last for less than two decades.

Coal mines that expire before the lifetime of new coal plants scream for greater economic prudence from investors.

India’s ambitious renewable energy expansion plans need to be complemented by a phase-out plan of coal. The world needs stronger political leadership from India as it tries to tackle the twin challenges of poverty and climate change.