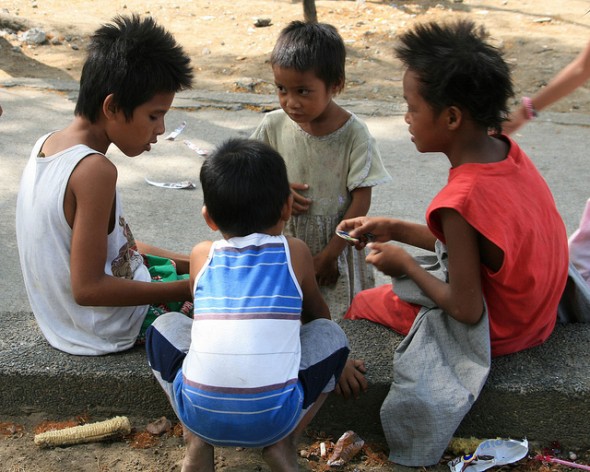 MANILA, Mar 20 2015 (IPS) - When Tinay Alterado’s team from ARUGAAN, an organisation of women healthcare advocates, visited Eastern Visayas, a region of the Philippines devastated by Typhoon Haiyan in November 2013, they noticed that the relief and rescue sites were flooded with donated milk formula, which nursing mothers were feeding to their babies in vast quantities.

Milk formula was one of the hundreds of relief items that streamed into the affected region in the aftermath of the strongest recorded storm to ever hit land.

“No one knows if GMOs are safe to eat, but there is mounting evidence that they pose dangers to human health." -- Angelina Galang, head of Consumer Rights for Safe Food (CRSF)
“We intervened because we knew from what we saw that we had to teach women how to breastfeed and how important it is for them, their babies and their families,” Alterado told IPS.

ARUGAAN, which in Filipino means to nurture or take care of someone, is a home centre organised by mostly poor, urban working mothers who care for babies up to three-and-a-half months old and advocate for healthy lifestyles, especially exclusive breastfeeding.

“We informed the women that they can and must breastfeed, and it should be for [up to] six months or even longer,” Alterado said.

Her group’s emergency response in the typhoon-affected areas took more time than planned, as they had to teach women how to induce milk from their breasts through a process called ‘lactation massage’ and how to store the milk for their babies’ next meal.

Alterado said her colleagues have doubled their efforts to spread awareness on this crucial aspect of motherhood, which is not ingrained in the country’s culture. Few people connect the act of breastfeeding with its associated economic and environmental benefits, such as reducing trash or easing a family’s financial woes.

According to the United Nations Children’s Fund (UNICEF), “An overreliance on rice, low levels of breastfeeding and […] recurring natural hazards, connected to and amplified by […] poverty, means that children do not eat enough” in this archipelago nation of just over 100 million people.

The U.N. Food and Agriculture Organisation (FAO) estimates that the Philippines is devastated by an average of 20 typhoons every year that severely damage crops and farmlands, adding another layer to the thorny question of how to solve the country’s food issues.

Last year, the Philippines joined a list of some 63 developing countries to meet the Millennium Development Goal (MDG) target of halving the number of hungry people ahead of the 2015 deadline. Still, the country has one of the highest malnutrition rates in the world, contributing to Asia-Pacific’s dubious distinction of being home to 553 million malnourished people as of 2014.

As government officials and international development organisations struggle to come to terms with these numbers against the backdrop of impending natural disasters, women across the Philippines are already leading the way on efforts to combat hunger and ease the burden of malnutrition.

Alterado’s crusade is no different from that of Angelina Galang who heads Consumer Rights for Safe Food (CRSF), a coalition of organisations pushing for consumers’ right to know, choose, and have access to safe and healthy food.

For Galang, the struggle starts at home. When her grandchildren visit every weekend, she doesn’t serve them the usual soda, junk food or take-out pizza favored by so many young people. Instead, she gives them fruits and healthy, home-cooked snacks like boiled bananas.

She said the children didn’t like it at first but after many months, they have become used to weekend visits with their grandma that do not feature Coke and hot dogs. “Hopefully, they will learn and adopt that kind of lifestyle as they grow up,” she told IPS.

Galang said teaching the ‘fast food generation’ about the right kinds and quantities of food is a challenge, especially since many young people are taken in by corporations’ attractive marketing tactics.

But the problems do not end there. CRSF is also challenging the Philippine government to conduct better research on genetically modified crops and to label food products that are known to have genetically modified organisms (GMOs), which alter the genetic makeup of crops to enhance their appearance, nutrient content and growth.

“No one knows if GMO foods are safe to eat, but there is mounting evidence that they pose dangers to human health,” Galang asserted.

“Consumers are the guinea pigs of GMOs,” she said, adding that eight GMO crops have been approved by the Philippine government for propagation and 63 for importation.

The movement against genetically modified crops recently coalesced around the government’s attempts to plant the genetically engineered ‘golden rice’, a strand fortified with beta-carotene that the body converts to Vitamin A.

The government claimed its experiment was designed to address the country’s massive Vitamin A deficiency, which affects 1.7 million children under the age of five and roughly 500,000 pregnant and nursing mothers, according to the Philippines-based International Rice Research Institute (IRRI).

Activists and concerned citizens say that GMOs will worsen hunger, kill diversification and possibly contaminate other crops. Women like Galang also contend that until long-term, comprehensive studies are done, “It is better to eat and buy local, unprocessed and organic foods.”

Experts say the first step in the health food movement is to educate children on the importance of eating local and organic.

Camille Genuino, a member of the Negrense Volunteers for Change Foundation based in Bacolod City, is witnessing this first hand. Her four-year-old child, who attends a daycare centre, is learning how to plant herbs and make pasta and pizza from the fresh produce harvested from their little plot.

“Educating children and exposing them to the benefits of farming is good parenting,” said Genuino, whose non-governmental advocacy group produces the nutritious Mingo powder – an instant formula that turns into a rich porridge when mixed with water – which is distributed in disaster-stricken areas.

Her child’s daycare centre is based in Quezon City, a poor, urban area located close to a waste disposal facility where residents have installed farms on their roofs so they can grow their own food. The centre conducts regular feeding programmes for 80 to 100 children in the area.

It is a humble effort in the greater scheme of things, but similar initiatives across the Philippines suggest a growing movement, led largely by women, is at the forefront of sparking changes in the food and nutrition sector.

“People should know how to plant vegetables – like tomatoes, eggplant, pepper and string beans – in pots, and recycle containers for planting,” she said. “This would at least ensure where your food comes from because you source your meals from your own garden.”

More than 200 farmer-members of SARILAYA – mostly across Luzon, one of the three major islands in the Philippines – practice organic agriculture, believing it to be the best guarantee of their families’ health in the era of processed foods, GMOs and synthetic products.

Geaga said Filipino women, including the ones staying at home and raising their children, are at the forefront of these consumer and environment advocacy efforts.

Citing studies by the Food and Nutrition Research Institute and the University of the Philippines, she pointed out that poor families spend 70 percent more on purchasing infant formulas than other needs in the household and that youth in the 16-20 age-group consume fast food products heavy in fat, cholesterol and sodium on a daily basis.

Such statistics are not just numbers on a page – they are the reason scores of women across the Philippines are doubling up as scientists, farmers and activists so that they and their families can be a little healthier, and perhaps live a little longer.