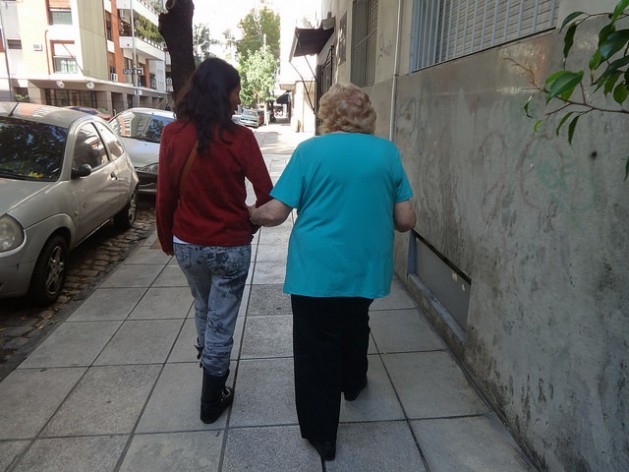 BUENOS AIRES, May 19 2015 (IPS) - As in the rest of the world, the care of children, the elderly and the disabled in Latin America has traditionally fallen to women, who add it to their numerous domestic and workplace tasks. A debate is now emerging in the region on the public policies that governments should adopt to give them a hand, while also helping their countries grow.

The challenges women face are reflected by the life of body therapist Alicia, from Argentina, who preferred not to give her last name. After raising three children and deciding to concentrate on her long-postponed dream of becoming a writer, she now finds herself caring for her nearly 99-year-old mother.

The elderly woman is in good health for her age, with almost no cognitive or motor difficulties. But time is implacable, and Alicia is starting to wonder how she will be able to afford a full-time nurse or caregiver.

“In Latin America we’re facing what has been called the caregiving crisis. As life expectancy has improved, the population is ageing, which means there are more people in need of care.” -- Gimena de León

“I can see things changing in my mother’s condition. She can still get around pretty much on her own – she can take a bath, she moves around, but it’s getting harder and harder for her. And she’s becoming more and more forgetful,” said Alicia, who up to now has managed to juggle her work and job-related travelling thanks to the help of a cousin and a woman she pays as back-up support.

According to Argentina’s national statistics and census institute, INEC, women dedicate twice as much time as men to caregiving: 6.4 hours a day compared to 3.4 hours. Among women who work outside the home, the average is 5.8 hours.

But given the new demographic makeup of the region, the situation could get worse, according to Gimena de León, a United Nations Development Programme (UNDP) Inclusive Development analyst.

“In Latin America we’re facing what has been called the caregiving crisis,” she told IPS. “As life expectancy has improved, the population is ageing, which means there are more people in need of care.”
“At the same time the proportion of the population able to provide care has shrunk, basically because of the massive influx of women in the labour market. That’s where the bottleneck occurs, between the caregiving needs presented by the current population structure and this drop in family caregiving capacity,” she added.

The International Labour Organisation (ILO) reports that 53 percent of working-age women in the region are in the labour market, and 70 percent of women between the ages of 20 and 40.

It also estimates that in 2050 the elderly will make up nearly one-fourth of the population of Latin America, due to an ageing process that is a new demographic phenomenon in this region of 600 million people.

Changes that according to René Mauricio Valdés, the UNDP resident representative in Argentina, “leave a kind of empty space,” which is more visible in the political agenda because up to now it was taken for granted that families – and women in particular – were in charge of caregiving.

The UNDP and organisations like the ILO and the United Nations Children’s Fund (UNICEF) are promoting a regional debate on the need for governments to design public policies aimed at achieving greater gender equality.

According to the UNDP, caregiving is the range of activities and relationships aimed at meeting the physical and emotional requirements of the segments of the population who are not self-sufficient – children, dependent older adults and people with disabilities.

In the region, the greatest progress has been made in Costa Rica, especially with respect to the care of children, and in Uruguay, where a “national caregiving system” has begun to be built for children between the ages of 0 and 3, people with disabilities and the elderly, with the additional aim of improving the working conditions of paid caregivers.

Other countries like Chile and Ecuador have also made progress, but with more piecemeal measures.

In Argentina the national programme of home-based care providers offers training to paid caregivers and provides home-based care services to poor families, through the public health system. But the waiting lists are long.

“The current policies don’t suffice to ease the burden of caregiving for families, and for women in particular, who are the ones doing the caregiving work to a much greater extent than men,” said De León.

“The distribution of time and resources is clearly unfair to women, and the state has to take a hand in this,” she said.

Solutions should emerge according to the specific characteristics of each country. Measures that are called for include longer maternity and paternity leave, more caregiving services for the elderly, more daycare centres for small children, flexibility to allow people to work from home, and more flexible work schedules.

But caregiving is still a relatively new issue in terms of public debate, and has been largely invisible for decision-makers, according to Fabián Repetto of the Argentine Centre for the Implementation of Public Policies Promoting Equity and Growth.

“The different things that would fit under the umbrella of a policy on caregiving were never given priority in the political sphere,” she told IPS.

Repetto believes the issue will begin to draw the interest of the political leadership “when it becomes more visible.”

The “economic argument” of those promoting this debate, the UNDP explains, is “the need to incorporate the female workforce in order to improve the productivity of countries and give households a better chance to pull out of poverty.”

In addition, it is necessary to improve “the human capital” of children, “whose educational levels will be strengthened with comprehensive care policies in stimulating settings.”

“What does that mean? That those children who receive early childhood development today, and who we give a boost with a caregiving policy, will be much more productive. And being much more productive as a society makes the country grow, and makes it possible to have better policies for older adults as well,” Repetto said.

Alicia prefers a “human” rather than economic argument.

“The idea is to respect the life of an elderly person, which sometimes for different reasons is hard to maintain. Respect for the dignity of the other, so they can live the best they can up to the last moment. For them to be cared for, and that doesn’t just mean changing their diapers, but that they are cared for as a human being.”