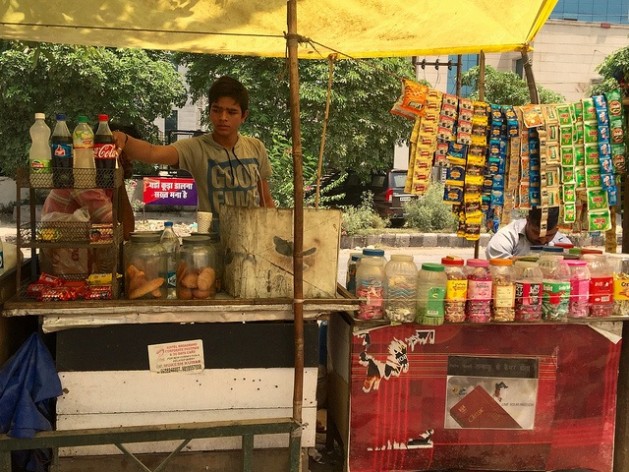 There are an estimated 10 million street vendors in India. Credit: Neeta Lal/IPS

NEW DELHI, Jun 2 2015 (IPS) - For the past nine years, 27-year-old Jignesh has been hawking bed sheets on the bustling pavements of Janpath, a major throughway in India’s capital, New Delhi, as kamikaze traffic swirls around him.

Illiterate and jobless, the young street vendor migrated from the western Indian state of Gujarat to eke out a living for his family of four, hoping that this metropolis would offer better prospects.

"It's a daily fight for survival. Sometimes I feel like just giving it all up and getting back to farming." -- Jignesh, a young street vendor who migrated from Gujarat to New Delhi to provide for his family
But local cops and members of the city’s mafia routinely harass the poor vendor to extort ‘hafta’ – a weekly bribe of one dollar that represents a significant chunk of his daily income of five dollars, which he earns after a 12-hour grind.

If he doesn’t comply, he is roughed up, or his wares confiscated.

“It’s a daily fight for survival,” Jignesh tells IPS, rolling up his sleeves to show bruises on his wizened arms, the result of a recent tussle with the police.

“Sometimes I feel like just giving it all up and getting back to farming.”

Despite passage of the path-breaking Street Vendors (Livelihood Protection and Regulation of Street Vending) Bill last year, which ordered local municipal authorities to set up designated vending zones for hawkers to enable them to practise their trade peacefully, few municipalities have honoured the law.

As a result the vast population of vendors in India – over 10 million people – continues to live in insecurity as they attempt to earn an honest day’s living. Many are economic migrants from the country’s rural heartland, where declining agriculture has left millions of smallholders or farm labourers in abject poverty.

Before the Act came into existence, vendors used to hawk their goods illegally, making them vulnerable to extortion, harassment, heavy fines and sudden evictions.

But in 2010, the Supreme Court declared hawking a fundamental right.

“Considering that an alarming percentage of the population in our country lives below the poverty line, and when citizens by gathering meagre resources try to employ themselves as hawkers and street traders, they cannot be subjected to a deprivation on the pretext that they have no rights,” the apex court ruled.

The recent bill provides for the establishment of a Town Vending Committee with representation from all stakeholders – street vendor organisations, civil society groups, traffic police and municipal authorities.

The committee is required to register vendors, providing them with identity cards to better regulate hawking activities in public areas.

Social security and insurance schemes are part of the ambit of the new law, which also promises bank loans to hawkers to keep them out of the clutches of unscrupulous moneylenders.

However, vendors rue that ground realities – like vested interests of political parties and local policemen as well threats from resident welfare societies – continue to make their lives miserable.

“Despite the law, vendors are still regarded as a public nuisance. They are accused of depriving pedestrians of their space and causing traffic jams while local residents blame them of having links with criminals,” says Anurag Shankar, project manager at the National Association of the Street Vendors of India (NASVI), a coalition of 762 vendor organisations that has been campaigning for vendors’ rights since 2004.

This results in hundreds of obstacles, including trouble securing a licence, uncertainty over earnings and insecurity over street space. 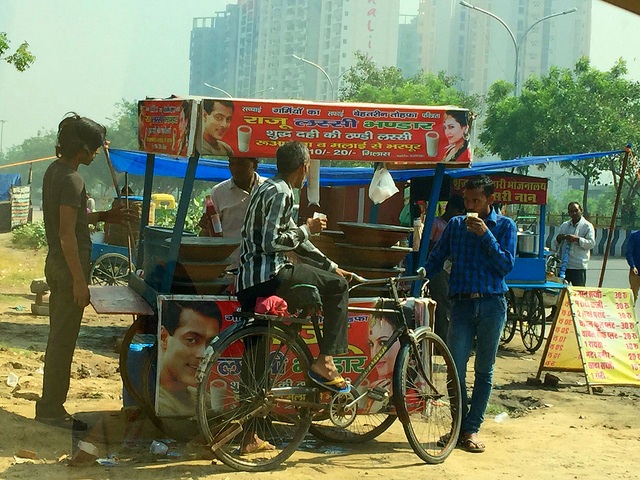 Hawkers and street vendors in India say they face routine harassment at the hands of the police, local thugs, politicians or municipal authorities. Credit: Neeta Lal/IPS

According to Sharit Bhowmik, professor and chairperson of the Centre for Labour Studies at Tata Institute of Social Sciences in Mumbai, the nub of the matter is that the new Act leaves too much to the discretion of local municipalities, thereby defeating the purpose of a Central legislation.

“The federal structure of the Indian government requires individual states to formulate their own policies and local urban bodies to come up with their own legislation, rules, and guidelines in the context of their local conditions,” he tells IPS.

Adding to the problem, explains the expert, who has written several international papers on street vending, is the fact that master plans for Indian cities rarely factor in space for vendors or pedestrians.

“Planners follow the western template of marketing, making provision for rich traders and big business, ignoring Indian traditions of street hawking. This adds to the space crunch and accounts for much of the current crisis,” he elaborates.

A study conducted by Bhowmik covering 15 Indian cities found that around 65 percent of street vendors took loans from moneylenders at exorbitant rates of interests ranging from 120 to 400 percent.

These loan sharks keep many vendors permanently in debt, retaining just 20-30 percent of their own income while doling out the rest in interest payments or on rent.

In April this year, vendors across India held massive rallies in the cities of Surat, New Delhi and Mangaluru to protest the non-implementation of the Street Vendors’ Act.

According to vendors’ representatives, city corporations neglect their interests while kowtowing to figures of authority.

“The vendors are invariably evicted without provision for a proper place for them to work,” Honorary President of the Centre for Indian Trade Unions Sunil Kumar Bajal tells IPS.

“In the process of eviction, they are physically assaulted and their wares destroyed. Often corrupt officials do not return the goods collected during eviction. We want the government to honour its commitment to vendors as directed by the apex court.”

Injustice to street vendors is compounded further by health hazards.

As this demographic spends its entire working day on open roads, its members are vulnerable to a range of health complications from chronic migraines to hyper-acidity, hypertension and high blood pressure due to pollution.

Shankar says the new legislation entitles vendors to be included in the National Urban Livelihoods Mission (NULM), so that they can also receive skill-based training.

“The Act gives them the right to livelihood, but they are still deprived of facilities like health, housing and education, which people in other unorganised sectors are entitled to. Inclusion in the mission will cover this glaring lacuna.”

Recognition of street vendors ought to be an integral part of urban economies around the world according to the International Labour Organisation (ILO), as they offer easy access to a wide range of goods and services.

“Their market base consists of a mass of consumers who welcome [access] to inexpensive goods and services that they provide,” says the ILO.

Currently India has the largest population of street vendors in the world and will likely see a rise in their numbers as rural-urban migration picks up speed in the coming decades.

The United Nation’s Department of Economic and Social Affairs (UNDESA) estimates that the global urban population will grow from its current 3.9 billion people to 6.4 billion in 2050. Just three countries – India, China and Nigeria – will account for 90 percent of that growth.

Given that poverty and a lack of urban planning often results in ever-higher numbers of slum dwellers in this country of 1.25 billion people – with 51 percent of people in New Delhi already residing in informal settlements – both local and international development experts say India must prioritize improving the lot of its hawkers and vendors.

If the government fails to take necessary action, millions of people like Jignesh will have to muddle through these busy streets in misery.