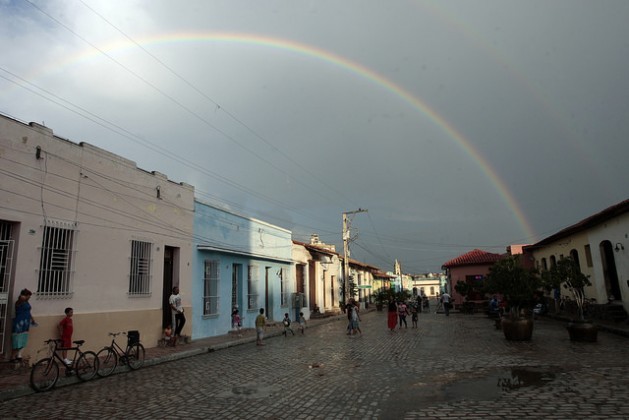 Plaza del Carmen in the historic centre of the central Cuban city of Camagüey, which is seeking to join the tourist circuit for visitors interested in alternatives to sun and beach tourism. Credit: Jorge Luis Baños/IPS

El ABRA, Cuba, Aug 25 2015 (IPS) - Along the road to the Viñales valley, travelled by thousands of tourists to Cuba, lies the home of self-taught artist Miguel Antonio Remedios, which he has turned into a sort of museum to show visitors a wooden home typical of this mountainous area in the west of the country.

“It would be a big help if (state tour operators) included this project on the tourist routes,” the 47-year-old painter told IPS in his home, which doubles as a gallery, where he has his studio and has launched the initiative “Remedios del Abra”.

His project and similar initiatives are overcoming hurdles to tap into the tourism boom in this socialist island nation, which has become fashionable since the thaw with the United States.

The U.S. government put new rules in place in January making it easier for people from that country to visit Cuba, expanding the list of categories of authorised travel to 12, including visits for educational, religious, cultural, journalistic, humanitarian or family purposes.

In that period, the number of foreign tourists totaled 1,136,948, which would indicate an increase from last year’s total by year-end, when the number of visitors climbs.

Viñales valley and El Abra, a mountain village in the municipality of La Palma, are places of spectacular scenery in the hills of Cuba’s westernmost province, Pinar del Río.

Offering bird-watching, hiking, and striking landscapes of mogotes or tall, dome-like limestone hills that rise abruptly from the flat plain of the valley, the province draws part of the three million foreign tourists who visit Cuba every year.

Remedios’ home is a traditional western Cuban wooden house with a palm-frond thatched roof. Above the wide gate hangs an ox yoke. In the main room inside is a long, rustic table lined with benches, a clay pitcher with fresh water, and a woodstove. The bedrooms are furnished with beds with wire mesh. 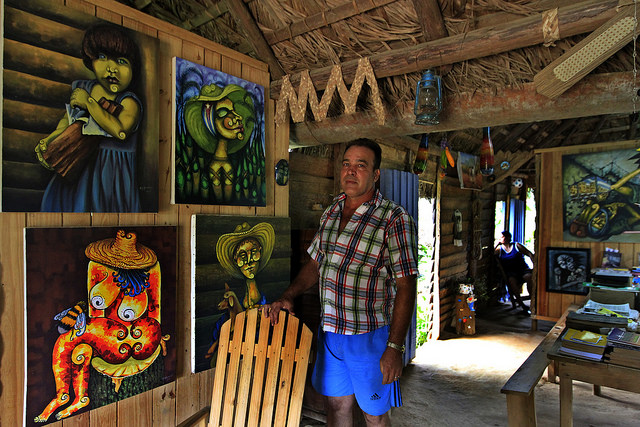 Self-taught artist Miguel Antonio Remedios in his rural home, which he has turned into a gallery, art studio and museum of a traditional western Cuban house in El Abra, a mountain village in the western province of Pinar del Río. Credit: Jorge Luis Baños/IPS

Paintings by the artist, who is registered with the government’s Cultural Goods Fund – a requirement to be able to sell his art – hang on the walls, waiting for buyers.

With the sales of his art works, which are painted in a naive style, Remedios fixed up his museum-home, where he was born and grew up, and bought the materials needed to give free painting classes to local children. He began his project in 2013. He accepts small voluntary donations from visitors.

He says that “to revive peasant traditions and promote local painters” he would like to have more support from the local authorities, in order to build a classroom, an exhibition room and a ranchón or open-walled thatch-roofed structure to hold traditional rural fiestas or festive gatherings on weekends.

“The development of tourist attractions other than sun and beach will depend above all on the efforts made by the provinces, and how they use their own resources and capacities,” Professor Ricardo Jorge Machado, who was an adviser on tourism to the Council of Ministers between 1980 and 1993, told IPS.

Among Cuba’s limitations as a tourism destination, experts identify the limited nightlife, a lack of culinary variety, stores with limited supplies and a lack of personalised services.

The biggest attractions, on the other hand, are how safe the country is, and the fact that Cuba is an oasis in today’s globalised world, free of the same old stores, chain restaurants and products. There are no Coca Cola or McDonald’s billboards, or fast food restaurants, they note.

The country has begun to improve infrastructure, with new hotels, ports that can serve cruise ships, terminals for the ferries that will begin to arrive from the U.S. state of Florida in September, and the expansion of the José Martí International Airport in Havana.

The expert advises local governments not to wait for financing from the tourism ministry but to undertake their own initiatives in conjunction with the private sector and with cooperatives, using their own funds made available by the current economic decentralisation process.

In its plan for the period up to 2030, the Tourism Ministry has prioritised 100 sun-and-beach projects and only two ecological tourism initiatives.

Tourism is Cuba’s second-biggest source of revenue, after the export of professional services. In 2014 tourism brought in more than 2.7 billion dollars.

The government’s strategy appears to focus on beach resorts and high-end tourism, with the construction of controversial golf courses and the boom in cruise ship traffic, which has risen nearly two-fold from last year, according to the Transport Ministry.

For the first time, the tourism authorities recognise the country’s growing private businesses and cooperatives as indispensable partners, while they attempt to capture foreign investment.

Up to now, the best-promoted tourism areas are the capital, the beach resort of Varadero, 140 km east of Havana, and the keys to the north of the main island.

The Cuban archipelago consists of the main island and 4,195 small islands and keys, where nature is exuberant.

Even in the capital, Machado estimates that there are 90 strong tourist attractions but says that only 12 are exploited, like the El Floridita bar, where U.S. writer Ernest Hemingway (1899-1961) was a habitué, the La Bodeguita del Medio restaurant, and the Tropicana cabaret.

“Cuba should do more to vary its tourism products, putting an emphasis on elements of its public image that strengthen credibility: its health system and the safety of the country,” said the analyst. In his view, “more specialised forms of tourism, such as long-stay and health tourism, associated with older adults, should be a priority.”

He pointed out that competitors in the region, like Mexico and Colombia, are getting involved in medical tourism – including doctors trained in Cuba – but this country could offer even lower costs.

One million people from the United States travel abroad for health tourism every year.

Alternatives of this kind could generate opportunities in different parts of Cuba, because there are skilled healthcare professionals throughout the country, he said.

“It’s obvious that more and more visitors are arriving,” said Reina Ramos, a schoolteacher, walking down an avenue in central Havana, who pointed to the large numbers of tourists riding about the city in classic cars or convertibles now painted in bright colours – pink, purple or yellow – and serving as taxis.

If the U.S. Congress removes the restrictions on travelling to Cuba in the near future, as lawmakers are currently debating in Washington, the influx of visitors would set new records for the local tourism industry, posing the risk of collapse for the country’s hotels and other services.

In the meantime, villages and towns off the beaten track, with stunning landscapes or colonial-era architecture, have set their sights on tourism, but are facing difficulties creating lodgings, networks of services and even roads that would make it possible for them to share the benefits of the tourism boom.

With its cobblestone streets, spacious plazas and colonial-era houses, the historic centre of the city of Camagüey in central Cuba is drawing up its own plans for increasing the number of visitors.

“The idea is for tourists to come here as part of a circuit of colonial-era cities, similar to the one already offered by the Havana City Historian’s Office,” Camagüey city historian José Rodríguez told IPS.

He said the offices aimed at preserving the country’s heritage are designing a tour that would take visitors to Old Havana, Cienfuegos, Trinidad, Sancti Spíritus, Bayamo and Camagüey, whose historic centre was declared a UNESCO (United Nations Educational, Scientific and Cultural Organisation) World Heritage Site in 2008.

The Camagüey office is developing a list of high-quality tourist offerings, ranging from small charming hotels to a thriving nightlife, with a variety of cultural options for tourists and the 300,000 inhabitants of the country’s third-largest city.