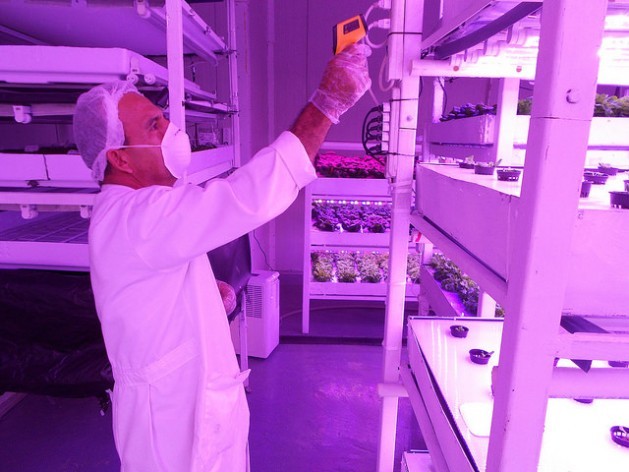 Nelson Pérez monitors the water temperature in the trays where lettuce grows in a controlled-environment farm in the town of Rio Hato, Panama. Vertical farms are beginning to catch on around the world, as a technique that boosts food security, in the face of the impacts of climate change. Credit: Emilio Godoy/IPS

RÍO HATO, Panama, Dec 5 2015 (IPS) - Infrared thermometer in hand, Nelson Pérez checks the water temperature in the trays where dozens of small lettuce plants are growing in a nutrient-rich liquid in this vertical farm in Panama.

The water, which contains calcium, phosphorus, magnesium and vitamins, must be kept at a steady 21 degrees Celsius, to obtain the best growth.

Pérez is the watchful carekeeper of the lettuce growing in trays in the controlled environment created by the Urban Farms company in the town of Río Hato, population 15,700, in the province of Coclé, some 125 km north of Panama City.

The vertical farm, the only one of its kind in Latin America, is an example of controlled-environment agriculture, a technology-based approach toward food production which often uses hydroponic methods. This kind of farming helps combat the effects of climate change on agriculture.

“Climate change has affected agricultural production,” said David Proenza, founder of Urban Farms. “So we saw a need to see what changes we could bring about, using technology.”

In 2010, Proenza heard about experiments with vertical farming in Asia and travelled to Japan, where he contacted researchers and members of the business community.

He brought the technique back to Panama, and he and his new partners decided to send an agronomist to be trained in Japan.

Until then, he was a conventional producer of watermelon and other crops.

“The farmer controls everything, from the seeds to the harvest,” he explained to IPS. “The idea is to produce and consume locally.”

Proenza set up a partnership with two other people, and receives guidance from an outside group. He employs two full-time and two temporary workers.

On his four-hectare property, Proenza dedicated a 12 by 17-square-metre space to setting up 60 hydroponic trays with a capacity for growing 30 to 36 plants each.

Hydroponics is a method of growing plants without soil, using mineral nutrient solutions in water.

After three days, the seeds are transplanted from the germination tray to the growing trays. Three weeks later the lettuce is picked, processed and packed for distribution to supermarkets.

The vertical farm produces some 2,000 heads of five different kinds of lettuce a month, without pesticides, preservatives or large extensions of land.

A computer programme controlled from a smartphone regulates the temperature of the room and the water, as well as the lighting and irrigation.

The low voltage grow lights, which stay on for 18 hours a day and cost 120 dollars each, produce red, yellow or blue light, each of which has a particular effect. The trays hold between 25 and 100 litres of water, depending on the size.

Panama is highly vulnerable to climate change, exposed to intense storms, flooding, landslides and drought. The climate of this tropical Central American nation of four million people was previously divided into wet and dry seasons, but now the difference is less marked.

Río Hato is at one end of the Arco Seco or “dry arch”, an important area of food production for both export and domestic consumption.

Agriculture accounts for around four percent of the country’s GDP.

Official statistics show that grain harvests have shrunk in 2014 and 2015, with the exception of corn, due to factors that experts blame on climate change.

The 2010 report “Panama: Effects of Climate Change on Agriculture”, produced by the United Nations Economic Commission for Latin America and the Caribbean (ECLAC) and other international bodies, stated that climate change would cause this country agricultural losses amounting to between four and seven percent of GDP by 2050 and between eight and nine percent by 2100.

Gustavo Ramírez, a professor with the Cuautitlán Higher Studies Faculty at the Autonomous National University of Mexico, said vertical farming is viable in Latin America, but policies to stimulate it are lacking.

“With this system you can make better use of space,” he told IPS. “In urban areas, there are abandoned buildings that could be put to use, and there is much more space in rural areas.”

In Río Hato, Proenza, who has invested over 70,000 dollars in the farm, has tried growing strawberries, cucumbers, chili peppers, melons and watermelons, with positive results.

Vertical farming is in vogue in the United States, Japan, South Korea and Taiwan. An Association for Vertical Farming has been created, and groups companies, universities and individuals. It has offices in Canada, China, India and several European countries.

This farming method offers an alternative in cities around the world, and in impoverished rural areas where people still go hungry.

In cities like Buenos Aires, Mexico City or Santiago, rooftop gardens where people grow their own fresh produce are now common.

“Farmers earn three times more than in the countryside,” said Proenza. “Vertical farms are 30 percent less expensive than traditional farming, and 15 percent cheaper than greenhouses. The risk is minimal,” added the entrepreneur, whose initiative won the second National Prize for Business Innovation, granted by the National Secretariat on Science and Technology, in 2014.

His plan is to expand the vertical farm by 400 square metres, adding varieties of parsley, basil, coriander, arugula and strawberries.

Ramírez recommended that governments refocus their agricultural policies and rethink priorities. “Governments must show an interest, and should focus policies on exploring this technique. We need better planning for production, distribution and logistics,” he said.

The local and regional markets that would be developed through vertical farming would have “an enormous impact,” he said, but “seed capital and technological packages would be needed, based on our own model.”