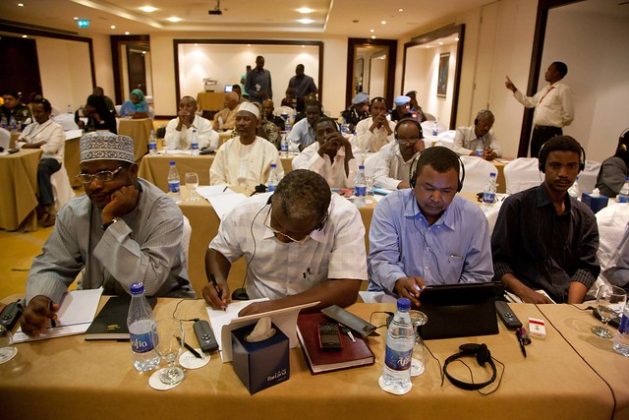 The United Nations said the current internet shutdown in Sudan forms part of a larger effort to stifle the free expression and association of the Sudanese population, and to curtail the ongoing protests in the country. In this dated picture, Sudanese journalists attend a press conference. Courtesy: Albert González Farran /UNAMID

UNITED NATIONS, Jul 9 2019 (IPS) - The United Nations has condemned an internet shutdown and the blocking of social media channels during Sudan’s political crisis, as fears persisted over a crackdown on media freedoms in the turbulent African country.

The U.N.’s independent expert on the human rights situation in Sudan, Aristide Nononsi, and two other officials, said in a statement that web blocking by Zain-SDN and other internet providers was stifling the freedoms of expression and association.

“In the past few weeks, we have continued to receive reports on internet blocking of social media platforms by the Transitional Military Council [TMC],” the experts said, referencing the TMC, which has run Sudan since the ouster of former president Omar al-Bashir in April.

“The internet shut down is in clear violation of international human rights law and cannot be justified under any circumstances. We urge the authorities to immediately restore internet services.”

The three officials said mobile operator Zain-SDN was behind the “most extensive blocking scheme” and had closed access to all key social platforms, which are used to share news and to arrange protests. Other providers MTN, Sudatel and Kanartel had also cut web access, they said.

“The internet shutdown forms part of a larger effort to stifle the free expression and association of the Sudanese population, and to curtail the ongoing protests,” the experts said in a statement on Monday.

“Restricting or blocking access to internet services not only adversely affects the enjoyment of the rights to freedom of expression, assembly and participation, but it also has severe effects on protesters demands’ regarding economic and social rights.”

Sudan’s military rulers ordered the internet blackout as a security measure on Jun. 3, when security forces also killed dozens of protesters as they cleared a sit-in outside the Defence Ministry in the centre of the capital, Khartoum.

The web blackout has affected most ordinary users of mobile and fixed line connections and is reportedly harming the economy and humanitarian operations in the African nation of some 40 million people.

Sudanese journalists have also raised concerns about the treatment of reporters during the ongoing political crisis.

On Jun. 20, journalist Amar Mohamed Adam was arrested and detained by the Rapid Support Forces (RSF), a paramilitary outfit under the TMC, before being handed over to the intelligence services, according to the Sudanese Journalists Network.

At the end of May, the TMC also ordered Qatar-based Al Jazeera Television offices in Khartoum closed, with officers from various Sudanese security branches turning up at the premises and seizing broadcast gear.

Sherif Mansour, a regional coordinator for the Committee to Protect Journalists, a watchdog and campaign group, described a “worrying sign” designed “to suppress coverage of pro-democracy events”. He urged the TMC to “reverse course”.

Protesters had been demanding the restoration of internet services as one of their conditions for getting back around the negotiation table with the TMC and forming a transitional administration made up of civilians and military officers.

Hopes were raised of a breakthrough last week, after Sudan’s military chiefs and protest leaders announced they had struck a deal on the disputed issue of a new governing body in talks aimed at ending the country’s months-long political crisis

The two sides reportedly agreed on a joint sovereign council to rule for a little over three years while elections are organised. Both sides say a diplomatic push by the United States and its Arab allies was key to ending a standoff that had raised fears of all-out civil war.