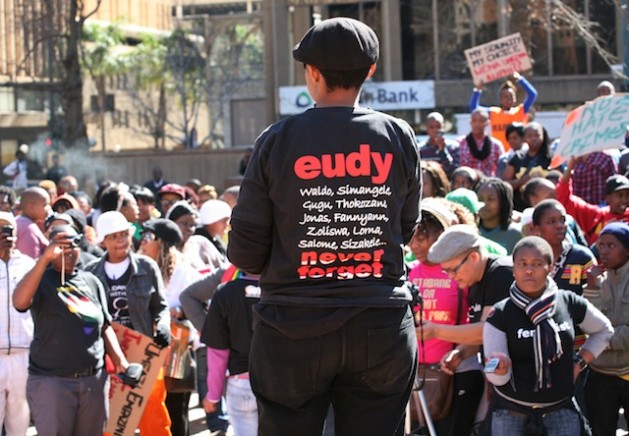 More than a hundred LGBT people, and various civil and human right organisations gathered in protest against the growing violence, rape, intolerance and the South African government’s failure to address the problem. Credit: Neo Ntsoma/IPS

JOHANNESBURG, Jul 19 2012 (IPS) - Wendy Hlophe* is still visibly grieving for her long-term friend, 28-year-old Sanna Supa, who was shot and killed outside her home in Braamficherville, a South African township, two weeks ago.

Tragically, Hlophe blames herself for Supa’s untimely death. Supa, a lesbian who came out about her sexual orientation three years ago, was one of the few openly gay women living in the township. She was a school administrator at Snake Park High School in Dobsonville, Soweto, and was killed as she parked her car at home on Jul. 1.

Hlophe told IPS that she holds herself responsible for Supa’s death because she is known as an openly gay woman in her township and she supported Supa when she came out. Hlophe fears that their closeness may have made Supa a target.

“We grew up in the same street and were often seen together,” she told IPS.

“I was shocked, and I couldn’t believe that she was gone. She was such a sweet person,” she added.

At the time of Supa’s death the Forum for the Empowerment of Women (FEW) had believed the motive for the crime was based on her sexual orientation as neither her vehicle nor her belongings were stolen.

“Are we the only people in this country noticing these killings … are the people being killed not human enough or not citizens enough?” asked FEW in a statement at the time.

The crime is certainly not a new one in South Africa. Supa is one of 10 lesbians who have been killed across South Africa in the past month because of their sexual orientation, said Jabu Pereira, a human rights and gender activist. Gay people are victimised daily across South Africa, activists said.

So while Wednesday Jul. 18 marked the 94th birthday of South Africa’s first democratically elected president and world icon, Nelson Mandela, gay rights activists here said they had nothing to celebrate.

And the 67 minutes that South Africans are encouraged to give back in community service on the day, a symbol of the 67 years that Mandela spent fighting for the freedom of his people, were considered a failure.

Gender activists and human rights organisations called the birthday a day of shame for the South African government and the ruling African National Congress (ANC), of which Mandela is still a member, for failing to halt hate crimes against lesbians, gays, bisexual and transgender (LGBT) people.

Activists accused the current government of turning its back on everything that former president Mandela stands for during a peaceful demonstration at the Library Gardens in Johannesburg’s city centre on Jul. 18.

More than a hundred LGBT people, and various civil and human right organisations gathered in protest against the growing violence, rape, intolerance and the government’s failure to address the problem. They said that the silence from government amidst the growing wave of hate crimes has exacerbated the situation.

“We are ashamed of our leaders, sick and tired of their silence,” Pereira said referring to the government’s inaction.

Protest organisers also condemned the homophobic comments made by ANC Member of Parliament Nkosi Patekile Holomisa following a submission by the House of Traditional Leaders to parliament’s Constitutional Review Committee that proposed the removal of the constitutional provisions protecting people from discrimination based on their sexual orientation or gender identity.

Holomisa said in a May 2012 interview that: “The ANC knows that the great majority of South Africans do not want to promote or protect the rights of gays and lesbians.”

In the interview he said he did not want to retract his comments and that “where I come from these things are not supported, not condoned.”

The ruling party has, however, distanced itself from the views. “The ANC believes that any law which denies people the right to their sexual expression devalues them in our broader society and as such is an affront to their dignity and a breach of Section 9 of our Constitution.”

Meanwhile, Wandile Ntubeni* sat on the margins of Library Gardens watching the group of protesters singing and toy-toying around the square.

Ntubeni, a 35-year-old father of three, said that what he heard about the discrimination and violence against gay people hurt him. He is a migrant worker from the Eastern Cape, where, he claimed, he had no contact with gays and lesbians. But he told IPS that it is wrong for the government to continue to be silent on the issue.

Ntubeni himself found it hard to explain why violent murder seemed to be the only response that some men had to gay women.

“People have a right to decide what they want to do with their bodies,” he concluded.

As he spoke, the director of the Gay and Lesbian Equality Project, Virginia Setshedi, led the chanting protestors to the ANC’s offices, which are directly opposite Library Gardens.

“Enough is enough!” she shouted to a handful of ANC party officials, including police officers, who stood lined up against the building’s walls.

Some scoffed, giggled and whispered, “This is a waste of time” while she read the protestor’s demands, which called for the government to break its silence on the issue.

“This is not a joke!” she screamed, her voice breaking. “This is a matter of life and death and we will not go away.”

The ANC’s elections manager Mandla Dlamini received the memorandum and said that the party would look at the document and formulate a response in due time.

Meanwhile, the tragedy of the often violent and humiliating treatment of LGBT people in South Africa remains a harsh reality.

And Supa’s violent death is something Hlophe will not forget.

“She was a sister to me, I still can’t face her mother,” she said on the verge of tears.

“She was happy after she came out to her mother,” she added.

A night vigil was held on Jul. 18 at the Women’s Gaol museum, at the country’s Constitutional Court in Johannesburg.

It was a time to remember all those who have been killed in vicious hate crimes from 2001 to July 2012: