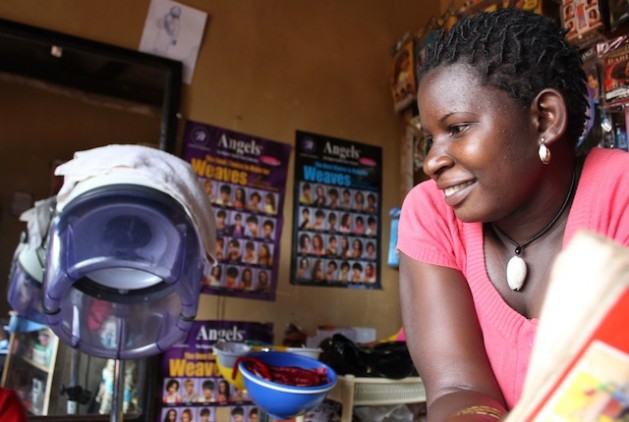 Annet Nakabiito, 22, dropped out after her fifth year of primary school. After attending a skills-training programme in hairdressing, she is now working in a hair salon in Kampala. Credit: Andrew Green/IPS

KAMULI, Uganda, Sep 26 2012 (IPS) - Three years ago, after Irene Kamyuka finished her sixth year of primary school in Uganda, her father ran short of money. With four siblings ahead of her in school, Kamyuka’s father told her she would have to drop out until his finances turned around.

“My father told me the money was finished,” she said. “He said: ‘You (wait) until the others are finished.’”

Kamyuka, determined to “study so that in my future I can get a job,” stuck it out. Eventually enough money was available so she was able to finish the last year of primary school, the seventh, in May this year. Then it ran out again before she could go on to secondary school.

Though this East African nation’s government-run schools are theoretically free, in reality parents who cannot afford to pay for uniforms, books and supplies cannot send their child to school.

Ugandans who live in rural areas, like Kamyuka, from Kamuli – a town on the edge of Lake Kyoga in central Uganda – and who make their living as subsistence farmers, run into consistent difficulties paying for their children’s schooling.

As in Kamyuka’s case, the outcome is often an interrupted – or cancelled – education. As dropouts, girls say they are stigmatised because people assume they left school because of a sexual relationship. In reality, though, the choice to stay in school is usually not even one they are allowed to make, because parents often see little incentive in ensuring that their daughters finish school.

“They look at the girl as a liability, because what the family does is to prepare a girl for a marriage,” said Johnson Ntende, the director of Kamuli Progressive College, a secondary school near the centre of town. “The role of a wife in a home is to cook for children and look after the man. That role does not require academic achievements.”

According to preliminary statistics from Uganda’s Ministry of Education for the 2012 school year, the number of girls who qualified to attend secondary school stood at 343,000, in contrast to 408,000 boys.

According to the World Bank, the literacy rate for young females aged 15 to 24 in this landlocked east-central African nation of 35 million was 84 percent in 2010, compared to 90 percent of males in the same age group for that year. This is a trend that is played out around the world, with girls less likely to be enrolled in school and to access medical care and more likely to be deprived of food.

The result, according to World Bank research, is a less-productive and more impoverished society.

In Kamyuka’s case, her parents wanted to send her to school, but simply could not afford it. The 15-year-old is now in her first year at Kamuli Progressive College though, thanks to funding from Plan International. She started school in August this year.

The international development charity is paying her term fees, which work out to about 20 dollars every three months. While the school is a public-private institution and receives some funding from the government under the universal primary education programme, there are some extra fees attached for uniforms and books.

Gloria Titi, the Plan International programme coordinator, said that in addition to paying for 54 girls in the area to go to school, the charity is also looking at ways to improve the environment in and around the school to mitigate a dropout rate that is still “too high” – and often has nothing to do with money.

Up to 54 percent of girls in Kamuli will drop out of school before finishing, according to Titi. At Kamuli Progressive College, there is a chart on the wall of the director’s office listing enrolment figures. There are 133 girls enrolled in their fourth year; the number drops to 21 for the fifth.

The reasons are myriad: harassment from men on the long walk to school, a lack of private bathroom facilities, and no money to buy sanitary pads during menstruation. Kamyuka said that some of the boys at her school target girls for consensual or forced sexual encounters, which can then harm the girl’s reputation. And if she becomes pregnant, she’s forced out, while the father of the baby is able to continue.

“(Girl students) start loving boys, which will lead them to school dropout,” Kamyuka said. “Boys are just destroying our lives.”

Kamyuka and her peers say that without an education, early marriage is the only option left to them. That idea is pervasive in Ugandan society. It kept Claire Namakula in a two-year abusive relationship.

At 15 she moved in with a man – who “beat me; he was abusing drugs, taking alcohol, smoking” – and quickly got pregnant. After two years, and despite not having any money, she took the unusual step of moving out on her own in Uganda’s capital city, Kampala.

Namakula, who is now 28 and was denied the opportunity to go to school, took a class on catering for undereducated women. When it finished, she and the other women formed a catering company, which they named Allied Female Youth Initiative. She said the training showed her that she had other options besides being dependent on a boyfriend or husband.

Before the training, “I didn’t even have an account in the bank,” Namakula said. “People would not respect me. Now, people can even kneel and say ‘hello’ to me as a responsible person.”