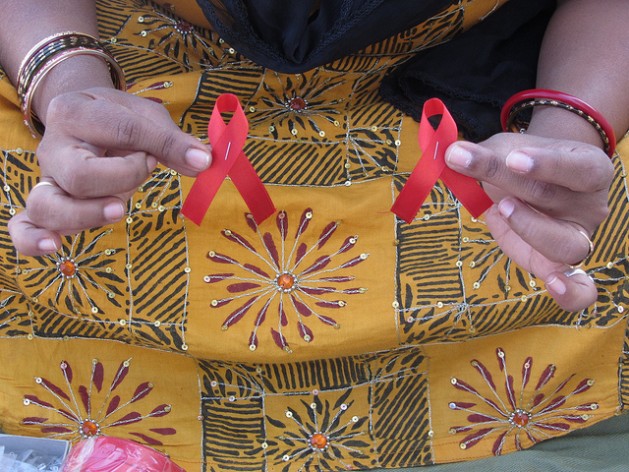 Among adult women in low and middle-income countries, the rate of new HIV infections fell by more than 50 percent over the past decade. Credit: Stella Paul/IPS

UNITED NATIONS, Dec 11 2012 (IPS) - Global efforts to reach the “three zeros” for women and girls – zero new HIV infections, zero discrimination and zero AIDS-related deaths – are gaining momentum. Much of the progress we have seen is underpinned by the work of women living with HIV.

Among adult women in low and middle-income countries, the rate of new HIV infections fell by more than 50 percent over the past decade. AIDS-related deaths among women fell by 27 percent between 2005 and 2011 versus a 23 percent decline in men.

More women living with HIV are accessing treatment: By the end of 2011, coverage of antiretroviral therapy stood at 68 percent among women compared to 47 percent coverage among their male counterparts.

The pace of progress is accelerating. In 21 priority countries of sub-Saharan Africa – the region most affected by the epidemic – nearly half of HIV-positive pregnant women received antiretroviral therapy for their own health in 2011, up from just 16 percent two years earlier.

Despite these gains, our efforts for women and girls remain inadequate – a message amplified by women living with HIV from around the world in the new report “Women out loud”.

According to the report, launched Tuesday by UNAIDS and UN Women, nearly two-thirds of pregnant women do not know their HIV status. In many settings, fear of violence and discrimination continue to play a major role in women’s reluctance to be tested for HIV or, if HIV-positive, to seek treatment.

The report finds that HIV continues to exact a heavy toll on young women: HIV infection rates among women aged 15-24 are twice as high as among their male peers. This disparity is most pronounced in sub-Saharan Africa, where 3.1 percent of young women are living with HIV compared to 1.3 percent of young men.

Clearly, our journey is far from over. Getting to zero will require accelerated action for women and girls in a number of key areas.

First, women and girls, in all their diversity, must be equipped with the knowledge and power to protect themselves from HIV and violence. To that end, gender equality, economic empowerment and women’s rights – in particular, their sexual and reproductive rights – are non-negotiable elements of effective HIV responses.

Third, it is our collective responsibility to advocate for changes in laws, policies and practices – grounded in reality – that protect women and girls from stigma and discrimination, safeguard their human rights, and shield them from violations such as rape and gender-based violence.

Finally, men and boys must be fully engaged in this movement to engender a supportive environment at family, community and national levels.

As our report testifies, the activism of women living with HIV is crucial. The world needs women’s leadership, resilience and good practices to transform our societies and communities. And we need stronger support for their full participation in AIDS responses.

“Despite decades of advocacy and evidence, the voices of women and girls remain on the margins,” noted AIDS activists from three corners of the globe in a joint editorial for Women out loud.

When women living with HIV speak out, we must listen carefully and act in solidarity to transform their words into action.