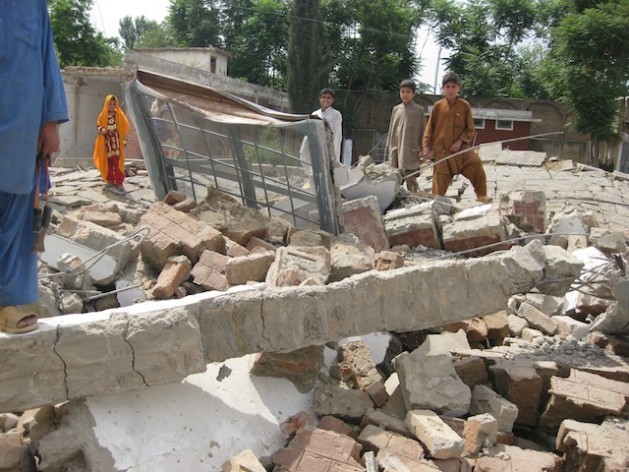 PESHAWAR, Pakistan, Jan 10 2013 (IPS) - Eight-year-old Muhammad Akram was forced to quit school when he was in the second grade, when the Taliban destroyed the small, government-run school that he and his brother had been attending.

Families in the militancy-stricken FATA, a hotbed of violence, blame the Pakistan military and the Taliban in equal measure for reducing the education system here to rubble.

The Taliban’s intolerance for any kind of “modern” education, which they believe to be “anti-Islamic”, coupled with the destruction or occupation of scores of school buildings for military purposes, has robbed tens of thousands of children of their right to gain a decent schooling, resulting in a literacy rate of 16 percent – the lowest in all of Pakistan.

Despite wishing to stay in school and pursue their studies, children spend their days playing in the streets and roaming about aimlessly, Akram lamented.

FATA Assistant Education Officer Mohammad Rehman told IPS, “Taliban militants, who are strictly opposed to modern education, have destroyed more schools in Mohmand than any other agency. Their campaign has left 12,000 children, including over 3,800 girls, idle.”

The education crisis here is the result of over a decade of militancy, which began when U.S.-led forces toppled the Taliban government in Kabul, forcing militants to flee Afghanistan.

The ‘war on terror’ that followed the attacks on New York’s Twin Towers and the Pentagon on Sept. 11, 2001 pushed hard-line militants to take up refuge along the 2,400-kilometre-long porous border between Afghanistan and Pakistan, and eventually settle in Pakistan’s tribal areas.

From here the militants began their campaign of terror, which included attacking government institutions and offices, as well as slowly but surely pulverising the school system across the region.

“The very first school to be destroyed was in South Waziristan. The campaign is still continuing today,” Rehman said.

But the militants are not the only ones to blame. Roughly, 100,000 military troops who are carrying out operations in the FATA in an effort to “eradicate” the Taliban use state-run buildings as hideouts.

“The army also live in government schools and the children have to stay home instead of studying,” according to a resident of Orakzai.

The army’s presence has brought despair in its wake, with some residents claiming that the army and the Taliban “are two sides of the same coin” in terms of their attitude to education and the younger generation.

There is no official record of the number of schools under military control in FATA because authorities fear “reprisals” for revealing such data, the Orakzai resident, who did not wish to be named, told IPS.

But what is plain to see is that the army has been utilising schools as “offices” and “camps” since 2005, he said.

For example, Cadet College Razmak in North Waziristan is closed to students because it serves as an army camp. The army has declared certain areas “war zones”, effectively making schools within those parameters off-limits to students.

However, the FATA secretariat was able to disclose that the army has reconstructed 80 schools in areas deemed “peaceful”, according to the source.

Education expert Umar Farooq told IPS that such a devastating scenario is likely to “send FATA youth back to the Stone Age.

FATA, which already had the lowest literacy rate in the country, compared to a nationwide average of 47 percent, is now faced with the gargantuan task of rebuilding Taliban-damaged schools, reclaiming those occupied by the army and preventing even further destruction, according to Farooq.

Umar Daraz Khan, an official at the directorate of education in FATA, told IPS that an acute shortage of funds to repair and reconstruct schools has stalled efforts to pull the literacy rate back to a reasonable level.

And even in the rare moments when funding becomes available, the Taliban’s ongoing anti-education campaign makes reconstruction that much more difficult to accomplish, Khan added.

So far, 72 million dollars from the government of Saudi Arabia has enabled the reconstruction of 60 schools in Bajaur Agency, he said. But experts and residents alike are agreed that a lot more remains to be done.

Meanwhile, teachers are also feeling the impact of a dying school system.

Ghani Shah, a teacher who was rendered jobless last March after the Taliban destroyed the school he worked at in Bajaur Agency, is furious at both the Taliban and the army. He is one of 15 teachers at the school who is now forced to do “odd jobs like selling fruits and other part-time jobs, because there is no hope of immediate reconstruction of the damaged schools,” he told IPS.

Akhunzada Mohammad Chittan, a lawmaker from Bajaur Agency, told IPS over the telephone that the government was extremely upset about the militancy in FATA and was trying its level best to defeat the Taliban as soon as possible and rebuild the schools.

“We have established tent schools in many agencies but these can’t substitute cemented buildings,” he said, adding that the militants are “enemies of Islam as well as the children”.

But some have given up hope that things will change.

Muhammad Jaffar, a farmer from Orakzai Agency, says he migrated to the nearby Kohat district in KP in order to raise his two sons and daughter in a peaceful environment.

“There is no hope that the schools will re-open any time soon because the army operation has been in progress since 2005 in FATA but the militants are still (active). Therefore, my decision to leave my hometown for the sake of educating my children was the correct one,” he told IPS.

He believes that the children of FATA will grow up to be “monsters” if immediate measures are not taken to safeguard their right to a decent education.