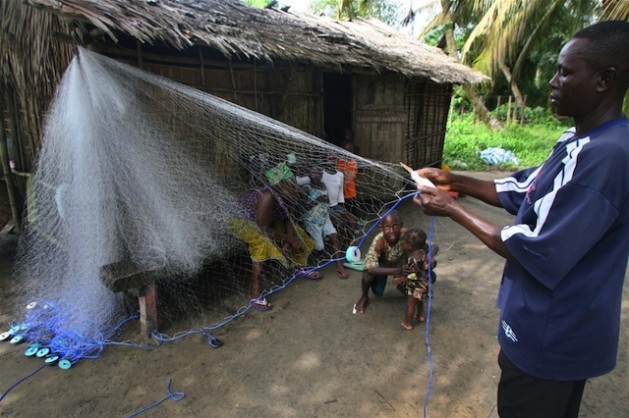 Waibite Amazi, a fisherman in Nigeria's troubled oil-rich delta region, spreads out his net outside his homestead, Nigeria. Farming and fishing is the main source of livelihood for the impoverished, rural population here. Courtesy: Dulue Mbachu/IRIN

LAGOS, Nigeria, Jan 31 2013 (IPS) - The decision by The Hague over Shell’s liability for polluting in the Niger Delta shows that justice is possible – but it is extremely hard to achieve if you are taking on a massive multinational, says Amnesty International’s Africa programme director Audrey Gaughran.

While The Hague dismissed most of the landmark case brought by the four Nigerian farmers and environmental pressure group, Friends of the Earth, against a subsidiary of international oil giant Royal Dutch Shell, the judges ordered Shell Nigeria to compensate one farmer for breach of duty of care.

The Nigerian farmers and Friends of the Earth filed the suit in 2008 in The Hague, where Shell has its joint global headquarters, seeking unspecified reparations for lost income from contaminated land and waterways in the petroleum-rich Niger Delta.

One of the farmers, Friday Alfred Akpan, from Ikot Ada Udo village, had complained that the oil leakage in his community had destroyed his 47 fishponds. He said the destruction of the ponds had resulted in his inability to fend for his family.

The Niger Delta, which accounts for 50 percent of this West African nation’s oil exports, has about 31 million inhabitants. Farming and fishing is the main source of livelihood for the impoverished, rural population here.

According to AFP, the Dutch arm of Friends of the Earth welcomed the one compensation order but was stunned to have lost the other cases.

“Clearly it’s good news that one of the plaintiffs in this case managed to clamber over all the obstacles to something approaching justice,” Gaughran told IPS from Lagos on Wednesday, Jan. 30.

“Given the really serious difficulties of bringing these cases at all, the significance of today’s ruling is that one plaintiff prevailed and will get damages.

“However, the fact that the other plaintiffs’ claims were dismissed underscores the very serious obstacles people from the Niger Delta face in accessing justice when their lives have been destroyed by oil pollution.

“It is clear that governments need to look at the formidable obstacles claimants face, especially when taking massive oil companies to court,” he said.

Wale Fapohunda, a commissioner with the National Human Rights Commission in Lagos, told IPS that the fact that the case was filed in The Hague showed a lack of faith in the Nigerian judicial system which is plagued by corruption.

“We need to focus and ensure that our own justice system is able to respond to human rights violations, particularly when they are committed by multinationals against citizens,” said Fapohunda, who is also a managing partner of the Legal Resources Consortium and the former secretary of the Presidential Commission on the Reform of the Administration of Justice in Nigeria.

“The trend now is that because victims in the region are often intimidated by the multinationals who believe they are close to our justice system, affected persons in the region will continue to find justice outside our shores, and that is bad for us,” said Fapohunda, who is also on the international advisory board of Penal Reform International.

Lawrence Quaker of Human Rights Law Services, Lagos, said the case as a good example of how Nigerians are beginning seek international justice amid the failure of the country’s judiciary.

“The filing of the case in The Hague shows that some people are losing confidence in the Nigerian judiciary and are going outside to seek redress. An example is the conviction of former Delta State Governor James Ibori in the United Kingdom.” In April, Ibori was convicted of fraud for allegedly stealing almost 77 million dollars intended for Nigeria’s poor. Prior to the case, Ibori had been tried in Nigeria on the same charges and had been found not guilty.

“It shows that the judiciary abroad is not biased and we can take cases against companies to their motherland for adjudication and get a fair hearing,” Quaker told IPS.

Shell hailed the judgment as a victory. Castelain was quoted by AFP as saying: “We are very pleased by the ruling of the court today. It’s clear that both the parent company, Royal Dutch Shell, as well as the local venture … has been proven right.”