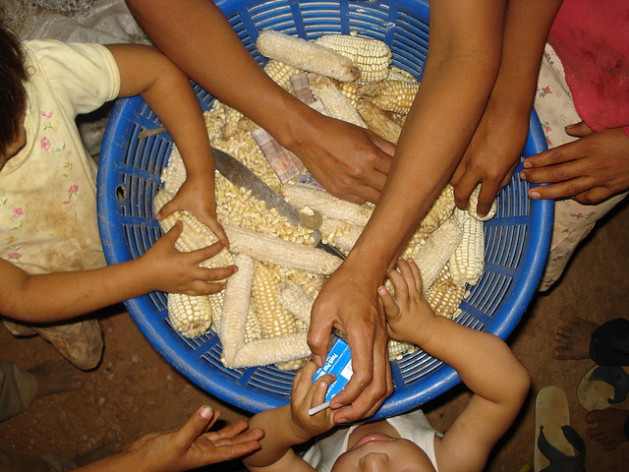 The International Food Policy Research Institute (IFPRI), a Washington think tank, says such numbers are “unacceptably high”, and warns that anti-hunger programmes have been “piecemeal”.

In an influential annual report on the state of the world’s food policy, released Thursday, the organisation said there were some positive achievements made last year, but that a number of policy changes are still required.

The report identifies agricultural development as an important potential job creator, particularly for young people. In developing countries, however, it warns that youths are no longer seeing agriculture as a viable career, looking instead to urban areas for work.

Leaders in sub-Saharan Africa – a region with the world’s fastest-growing population as well as youngest – are today looking to create job opportunities in agriculture, using new technology and farming techniques. In doing so, they are hoping to encourage the young and innovative emerging workforce in such a way that they can have a transformative impact on both economic growth and social development.

“Agriculture in most developing countries is a labour-intensive sector and makes up a big chunk of the labour force,” Lester Brown, founder of the Earth Policy Institute, a Washington advocacy group, told IPS.

“In recent years, large firms have introduced a type of agriculture that is very capital intensive and highly mechanised, but employs very little labour, so there has been a huge loss of employment. Further, modern agriculture requires modern infrastructure– electricity, grain elevators, fertiliser storage and mechanical expertise. To get there requires a lot of investment, but if done properly the nonfarm sector will grow alongside the farming sector.”

“Agriculture in Africa is now recognised as a source of growth and an instrument for improved food security,” Sheggen Fan, director-general of IFPRI, said Thursday.

“Africa’s agriculture can absorb large numbers of new job seekers. But in order for agriculture to be a technically dynamic and high-productivity sector that contributes to food security, it will need an influx of educated and innovative young labour.”

IFPRI’s researchers identify violent conflict, particularly in Central Africa, as both a cause and consequence of food security.

“Violence in Central Africa, especially in Nigeria, which accounts for more than a quarter of agriculture of sub-Saharan Africa has reduced output growth and food security, and has had dramatic social and economic consequences,” Mary Bohman, an official with the U.S. Department of Agriculture, said at a panel discussion Thursday.

Armed conflict in northern Mali and renewed violence in the Democratic Republic of Congo reportedly resulted in the displacement of approximately three million people within the region and forced a further 70,000 people to flee to neighbouring countries.

Fighting in Somalia and Yemen, the civil war in Syria, and unrest across the region in the aftermath of the Arab Awakening was compounded by low rainfall.

Drought in Central Asia, Eastern Europe and the United States had a dramatic impact on agricultural production and supply throughout the world. Approximately 80 percent of farmland in the United States was hit by the most severe drought in half a century, while high temperatures and low rainfall reduced wheat production in Australia, Kazakhstan, Russia and Ukraine – among the top producers and exporters of wheat.

According to many environmentalists, such extremes will only be further exacerbated as global climate change progresses – with further risks to food security.

“During the past year, it has become generally accepted that the world will see a two-degree increase in average temperature. But even then, food production, land degradation, deforestation are not the only problems – we’re talking about water risks across the spectrum and skyrocketing food prices.”

He said the new IFPRI report propels the issue of food into the centre of the discussion on climate change.

Experts are increasingly focusing on the centrality of gender equality in promoting agricultural growth and food security. Indeed, at Thursday’s event, presenters exhibited particular excitement over this new emphasis.

Over just the past year, new evidence on the role of gender in agricultural productivity has emerged, including in the World Bank’s annual World Development Report. This new data indicates that agricultural performance and food security improve through both agricultural and non-agricultural reforms that increase women’s access to production resources.

Further, women’s contributions to agriculture in developing countries have been shown to bring overall gains in agricultural productivity as well as increased nutritional benefits. Such contributions also improve women’s access to education, technology and financial services.

“When you look at statistics on the number of women farmers in the world, it is commonly anywhere from 40 to 80 percent in developing countries,” Danielle Nierenberg, co-founder of Food Tank, a think tank here, told IPS.

Nierenberg says it is very encouraging to see donors and investors beginning to tailor their production projects to the inclusion of women.

“While men more commonly grow cotton and maize and other industrial crops, women are the ones who grow the food that feeds the family,” she says. “To be effective, initiatives will need to focus on women’s overall equality across all sectors, not just the food and agriculture sector. Until we do that, we’re not going to see the gains we need – like higher yields, economic growth, the protection of environmental resources or the reduction in malnutrition and poverty.”

IFPRI director-general Fan agrees that the status of women is “critical” to poverty reduction, particularly in bringing down levels of malnutrition.

“Women have higher standards, and have been shown to better allocate the household budget as well as feed their families with more nutritious food,” he says. “One of the biggest links between poverty reduction and malnutrition is directly related the status of women.”