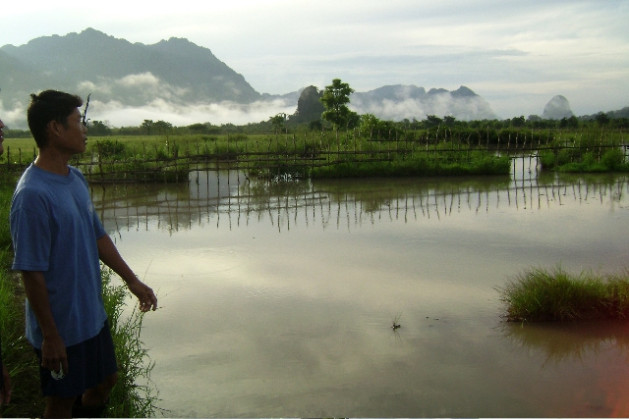 A farmer looks out at a flooded paddy field in Laos. Credit: E Souk/IPS

BANGKOK, Jun 20 2013 (IPS) - The future of food security in the Mekong region lies at a crossroads, as several development ventures, including the Xayaburi Hydropower Project, threaten to alter fish migration routes, disrupt the flow of sediments and nutrients downstream, and endanger millions whose livelihoods depend on the Mekong River basin’s resources.

Running through China, Myanmar (formerly Burma), Laos, Thailand and Cambodia to the Mekong Delta in Vietnam, this is Asia’s seventh longest transboundary river.

An estimated 60 million people live within the lush river basin, and nearly 80 percent depend on the Lower Mekong’s waters and intricate network of tributaries as a major source of food.

But if all goes according to plan, 88 dams will obstruct the river’s natural course by 2030. Seven have already been completed in the Upper Mekong basin in China, with an estimated twenty more either planned or underway in the northwest Qinghai province, the southwestern region of Yunnan and Tibet.

Construction of the 3.5-billion-dollar Xayaburi Dam on the Lower Mekong in northern Laos is the first of eleven planned dam projects on the main stem of the Mekong River, with nine allocated for Laos and two in Cambodia.

Construction began in 2010 and as of last month the project was 10 percent complete.

At best these development projects will alter the traditional patterns of life here; at worst, they will devastate ecosystems that have thrived for centuries.

Over 850 freshwater fish species call the Mekong home, and several times a year this rich water channel is transformed into a major migration route, with one third of the species travelling over 1,000 kilometres to feed and breed, making the Mekong River basin one of the world’s most productive inland fisheries.

Large-scale water infrastructure development projects such as hydropower dams have already damaged the floodplains in the Lower Mekong and in the Tonlé Sap Lake in Cambodia, affecting water quality and quantity, lowering aquatic productivity, causing agricultural land loss and a 42-percent decline in fish supplies.

This spells danger in a region where fish accounts for 50 to 80 percent of daily consumption and micronutrient intake, Ame Trandem, Southeast Asia programme director for the non-profit International Rivers, told IPS.

Locating alternative protein sources such as livestock and poultry is no easy task and would require 63 percent more pasture lands and more than 17 percent more water.

“Cambodia is the largest fish eating country in the world. Get rid of the fish and you’re going to have serious problems because there is not enough livestock in Cambodia and Laos to compensate for the loss,” Trandem said.

With a total population of over 16 million, the Mekong Delta is known as the ‘rice bowl’ of Vietnam. It nurtures vast paddy fields that are responsible for 50 percent of national rice production and 70 percent of exports.

This low-lying delta depends on a natural cycle of floods and tides, with which Vietnamese farmers have long synchronised their planting and harvesting calendars.

If all the dams are built, experts estimate that 220,000 to 440,000 tonnes of white fish would disappear from the local diet, causing hunger and leading to a rapid decline in rice production.

Six Thai commercial banks comprise the financial muscle of the project, while construction is in the hands of Thailand’s CH. Karnchang Public Company Limited, with some support from the Laotian government.

But energy experts like Chuenchom Sangarasri Greacen, author of Thailand’s Alternative Power Development Plan, have poked holes in the claim that the dam is required to meet growing energy needs.

But instead of developing their own generation capacities, these governments have chosen export projects that profit corporations over people.

“Thailand is creating a lot of environmental, social and food issues for local communities by extending its grid to draw power from beyond our borders,” Greacen said.

Already, 333 families from villages like Houay Souy in north-central Laos, who were moved to make way for the dam, are feeling the first hints of greater suffering to come.

Once a self-sufficient community that generated revenues via gold panning and cultivated their own riverbank gardens to produce rice, fruits and vegetables, villagers are now finding themselves without jobs, very little money and not enough food.

“The villagers’ primary source of food was fishing and agriculture. In their new location, about 17 km away from their old homes, they were given small plots of agricultural land but not enough for their daily consumption needs,” said Trandem.

“Ch. Karnchang never compensated them for lost fisheries, fruit trees or the riverbank gardens that were washed away. Their new homes were built with poor quality wood, which was quickly eaten into by termites, so what little compensation they did receive went to fixing their new homes,” she added.

These families, numbering about five members per household, are now barely surviving on 10 dollars per month and symbolise the gap between so-called poverty alleviation programmes and their impact on the ground.

“The Laos government claims that dams will generate revenue but in reality…projects like Xayaburi basically export benefits and profits away from the host country while smaller projects that are more economically sustainable are being ignored,” says Greacen.

She believes the Laotian government should explore small-scale renewable energy projects like biomass and micro-hydro plants that would attract local investment and directly serve local populations.

Blate also suggested building diversion canals for smaller dams, rather than obstructing the main stem of the Mekong River.