RIO DE JANEIRO, Jun 27 2013 (IPS) - The Catholic Church has become sclerotic and is afraid of facing the issues of post-modernity, Brazilian theologian Frei Betto says, although he hopes that Francis, the first Latin American pope, will inspire it to renew its emphasis on social issues and the defence of the poor.

Carlos Alberto Libânio Christo, known as Frei Betto, hopes that Pope Francis will encourage young people to dream again, commit themselves to social issues and believe in utopias, when he visits Brazil Jul. 22-29. 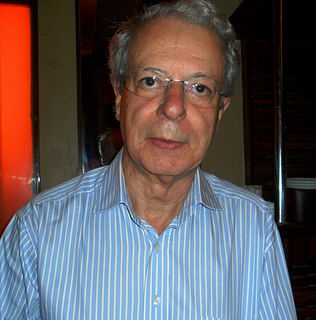 Jorge Mario Bergoglio, the archbishop of Buenos Aires until he assumed the papacy on Mar. 13, will undertake his first international journey to lead the 28th World Youth Day, to be held in Rio de Janeiro Jul. 23-28.

In this interview with IPS, Frei Betto, a Dominican friar who was a special adviser to leftwing former president Luiz Inácio Lula da Silva (2003-2011) in the early years of his mandate, called on Brazilian authorities to enter into “face-to-face” dialogue with social movements and listen to their demands, without empty words and hollow promises.

The author of more than 56 books and the winner of major literary prizes and awards for defending human rights, Frei Betto has just published a new work, “O que a vida me ensinou” (What Life Has Taught Me).

Q: What has life taught you?

A: The particular thing about this book is the autobiographical stories that I had never made public before, like my sharing in the last days of Tancredo Neves (the first president elected after the 1964-1985 dictatorship, who died before taking office), or how I looked after my father, who was chemically dependent.

In the book I also tell how I dealt with an attempted bribery, when I was offered a chance to make two million dollars, and I devote three chapters to my current views on spirituality.

Q: As an exponent of liberation theology, what role would you say this school of thought played in Latin American Catholicism?

A: I don’t think it should be consigned to the past. Liberation theology still plays an important role in the Latin American Catholic Church, especially in and through basic Christian communities, Bible reading groups, and meetings like the forthcoming National Conference on Faith and Politics in Brasilia in November.

I believe, moreover, that this school of thought has compelled papal discourse on social affairs to change. Recently pontiffs have been more forceful about these issues, shown by the criticisms of neoliberalism voiced by John Paul II and Benedict XVI, or on the positive side, the visits they both made to Cuba.

Q: How do you interpret Benedict XVI’s resignation and the election, for the first time, of a Latin American, Francis, to succeed him, rather than a European?

A: Resigning was an act of evangelical humility on the part of Benedict XVI, when no other pope had taken such a step for centuries.

I am very hopeful about the pontificate of pope “Chico Bento” (as Francis is popularly known, in reference to a rustic character created by Brazilian comic book artist Mauricio de Sousa), because he is Latin American. He is open to social questions and, above all, committed to defending the rights of the poor.

The fact that he adopted the name of Francis of Assisi, the most beloved saint in Christian history, admired for his evangelical poverty, says a great deal. I look forward to the 12 speeches he is due to give at the World Youth Day celebrations.

Q: Do you think a reform of the Catholic Church is possible? What, in your view, are the most sensitive challenges the church faces?

A: Pope Chico Bento will have to open up debate within the Catholic Church on urgent, burning issues that have long been kept on ice: an end to mandatory celibacy, ordination of women to the priesthood, condom use, biogenetics and the reform of the Roman Curia.

Q: World Youth Day will be Francis’ international debut. What are your expectations for this event?

A: I hope that the Youth Day, through the pope’s words and gestures, will bring hope to young people and encourage them to commit themselves to a world of justice, freedom and peace. I am convinced that the more utopian they are, the less they will turn to drugs, as in my generation, which was 20 years old in the 1960s.

And the less utopian, as in our present “globo-colonised” world, the more the drug use. Nowadays young people have no dreams.

Q: Do you think World Youth Day will be a call on the Church to renew itself, in order to counteract the loss or apathy of the faithful?

A: Yes, the Catholic Church has become sclerotic for fear of facing the issues of post-modernity, like those related to faith and science, social inequality, the new sexual profiles and gender relations.

Q: You were very close to Lula. From that viewpoint, what is your analysis of his successor, President Dilma Rousseff? Do you think that the governing Workers’ Party (PT) has changed course?

A: I regret that the PT has turned its project for Brazil into a project for power. However, I think the governments of Lula and Dilma are the best we have had in our history as a republic. Structural reforms are needed – land reform, political reform and so on – and better communication with the party’s base, the social movements.

Q: What do you think of the president’s handling of the numerous conflicts and social protests that have taken over the main cities?

A: She has shown lack of determination, timidity and a fear of displeasing the most reactionary members of her alliance and the barons of agribusiness. The PT has distanced itself from its social base, the movements that mobilise hope, and now it is in danger of falling victim to them.

The only way out for the government is to enter into face-to-face dialogue with these social movements, without empty words and hollow promises, and for the PT to return to working with its base, together with the oppressed and excluded sectors of the population.

The government is doing well in the distribution of income, and badly in the distribution of ‘political dividends.’ There is no dialogue with grassroots leadership, no progress on the demarcation of indigenous people’s territories or on land reform, nor is there consultation, as the constitution requires, of indigenous peoples about the construction of large projects in their territories.

Q: What is your view on the ongoing social protests, which were originally about public transport fare increases and then flared up because of harsh police crackdowns in Rio, São Paulo and other cities?

A: This is a new phenomenon. Analysts still haven’t realised it, but it’s enough to be linked to the social networking sites to feel the mobilisation, through information or the street demonstrations themselves. These protests confirm that our governments are very much distanced from the social movements and organised youth, especially the São Paulo government and the federal government.