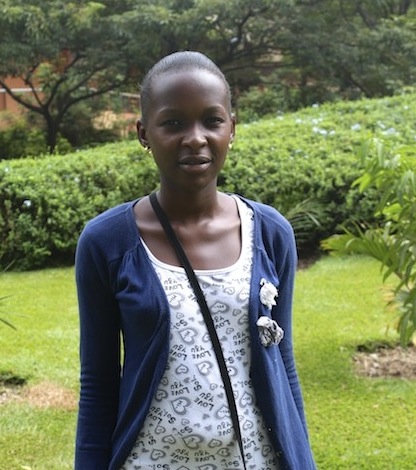 Eunice Namugerwa, 18, from Kampala’s Kisenyi slum started her own chicken farm out of need and was invited to inspire others and speak at TEDx Kampala, an independently organised TED (Technology, Entertainment, Design) event that aspires to spread and share ideas. Credit: Amy Fallon/IPS

KAMPALA , Jun 23 2013 (IPS) - When Eunice Namugerwa, an 18-year-old living in Kampala’s Kisenyi slum, decided to start a business to support her family last August, she scrawled three ideas down on a bit of scrap paper: a piggery, a fashion boutique and a chicken farm.

Little did she know that her entrepreneurial spirit would mean she would be invited to inspire others in the Ugandan capital by speaking at TEDx Kampala, an independently organised TED (Technology, Entertainment, Design) event that aspires to spread and share ideas.

Namugerwa began her business out of need. Her father, the family breadwinner, died of an HIV-related illness in 2004. And by 2012, her HIV-positive mother was too ill to work any longer.

“It was really so difficult because there were so many challenges for me,” Namugerwa tells IPS.

“There’s child abuse. The environment is not good, it’s too dirty. You’re always affected by disease. We could have starved at home. I didn’t want this kind of thing, begging for money. I looked for a way out.”

All three ideas would be hard, but Namugerwa had overcome many hurdles before. Despite being thrown out of school several times when her family could not afford the fees, Namugerwa learnt to play the flute and guitar through The Butterfly Project, which trains young people to become social entrepreneurs.

After discovering her singing talent, the project decided to pay her fees and Namugerwa became a student at the Kampala Music School.

In 2011 she established her own project to support disadvantaged children by training them in singing, dancing, acting and sports.

But for her next venture, she had to do something for her family. So she drew up three budgets, one for each idea. The student, who is in upper form six, the equivalent of a finishing school, was not sure there was a market for a clothes shop and thought buying piglets for a piggery would be too expensive.

After looking over her plans, Namugerwa concluded that a chicken farm would require the least capital.

Around the same time she met Tiarna Elmer, a British primary school teacher and volunteer for Mengo Youth Development Link, which works in Kampala’s slums as it strives to enhance the education and sporting talents of children.

Elmer gave Namugerwa one-and-a-half million Ugandan shillings (576 dollars) to buy some chicks and rent a small piece of land in Wakiso District, which is a 30-minute drive from the Kisenyi slum.

“Whenever they lay eggs, I sell the eggs, bringing in some money.”

Today Namugerwa has 200 chickens on her farm, which she runs on the weekends and during holidays. The rest of the time her 23-year-old brother holds the fort. Rent for the land is 11 dollars a month and the pair, along with their 22-year-old sister, have also started a DVD shop near the farm.

The budding entrepreneur has not made any money yet, but hopes to starting earning about a million Ugandan shillings or 385 dollars a month in two months’ time. She will give the money to her mum, who used to fry chips at the local market for an income, but is now bedridden

“She is ever so sick, but says she’s very happy with the idea because now we no longer struggle much with food,” says Namugerwa, who still lives in Kisenyi.

“Most of my friends are proud of what I do. Some want to be like me, they say ‘I want to do the same things you’re doing.’”

Of course there have also been hurdles along the way.

Namugerwa mentions the problem of disease taking its toll among the chicks, as well as the cost of feeding them. “They eat so much, so you always have to buy food for them. But it’s not hard. Everything has its challenges.

“I’d like to see more women engaging in farming and also in business. I’d like to encourage more Ugandans to come up with solutions (to problems),” she says.

It is important, Namugerwa says, for young women to have support. Many of her friends have left school and become pregnant.

“They’ve dropped out because they cannot afford the school fees. They can’t afford to eat,” she says.

“Boys disturb them. They decided ‘maybe let me go to this man and get some money’. They end up getting pregnant. That’s a big challenge.”

Four out of five women in Uganda are believed to work in agriculture, according to the 2008 Gender and Productivity Survey by the Economic Policy Research Centre of Uganda.

Send a Cow, an NGO which provides training, livestock, seeds and support to families in seven African countries, including this East African nation, says the majority of farmers they work with are women, as females traditionally do labouring work and provide for the family.

Richie Alford, head of Impact and Development at Send a Cow, tells IPS that keeping chickens is a good way for orphaned and vulnerable children to start improving the diversity of their diet with animal protein, and to begin creating a sustainable livelihood from the sale of eggs and animals.

“Chicken droppings can also be used in the homestead garden to increase soil fertility and water retention in the soil,” he says.

“This lengthens the growing season of vegetables and crops, increasing the ability of the farm to grow more crops that are also more productive. This increased crop production significantly strengthens the food security situation of the family.”

While in Uganda earlier this year, director-general of the United Nations Food and Agriculture Organization José Graziano da Silva said that although women played a major part in producing food and feeding their families, little attention had been given to the key role that rural women played in ensuring decent livelihoods for their households.

Popular Ugandan entertainer Annet Nandujja is one of Namugerwa’s role models. The musician, in her 50s, has had a chicken farm for eight years in Kampala.

Most musicians do not want to be involved in the unglamorous world of farming, she says, speaking in her local Luganda language through a translator.

“Every day we encourage women. Every day we talk to women…to not just sit at home and wait for their husbands to give them what they need,” Nandujja tells IPS.

“They should go out of their way to do something like this. A woman may want to be at home, but she can still stay at home and do this.”