The continuous transport of coal for export through northern Colombia offers little more than dust and noise to the rural communities who watch the trains pass by. 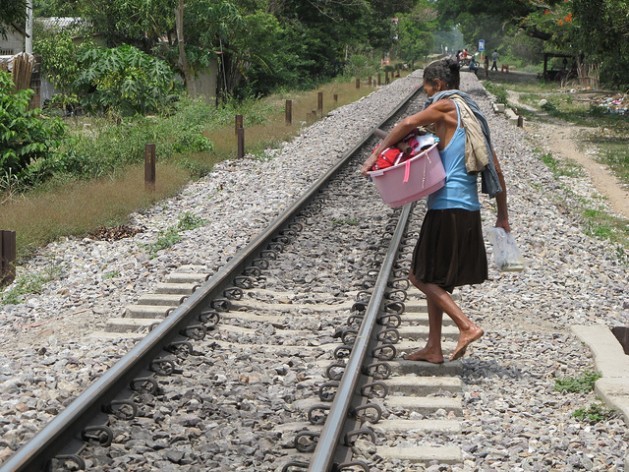 TUCURINCA, Colombia, Jun 11 2013 (IPS) - José “Goyo” Hernández has never been given a mask to keep him from breathing in the coal dust blowing off the 13 trains that pass daily through this village in the municipality of Zona Bananera in the northern Colombian department of Magdalena, during his 12-hour shift at the railway crossing.

The trains speed by at 80 kilometres an hour, with nothing covering the 160,000 tons of coal that pass through the village daily, extracted from the open-pit mines 226 kilometres to the southeast, in the neighbouring department of Cesar, by the U.S. mining company Drummond, Swiss-based Glencore Xstrata (through its subsidiary in Colombia, Prodeco) and Colombian Natural Resources, owned by U.S. investment bank Goldman Sachs.

Goyo wears the uniform of a private security firm contracted by Fenoco S.A., the private railway company awarded the Atlantic railway concession in 1999, whose shareholders include the same mining companies.

He guards the railway crossing where the coal train tracks cross the main street of Tucurinca.

Signs painted in English on the 120 train cars pulled by three engines indicate that each weighs 19.1 tons and has a maximum cargo limit of 60,750 kilograms.

The cars are filled to the brim with high-grade thermal coal. In compliance with an environmental permit for the coal’s transport, the surface layers have been moistened to minimise the amount of coal particles blown off by the wind.

But a report released by the Comptroller General’s Office in December 2012 concluded that this moistening is not sufficiently effective “in neutralising the release of coal particles.”

Studies have only been conducted on the land-based operations and activities in ports, the report stresses, which means there is no way of determining the “synergistic impacts” of all of the activities related to the export of coal, include its transportation on trucks, trains and ships.

When the train is approaching, Goyo sets up the “crossing signal”: two orange plastic traffic cones connected by a rope, and hanging from the middle of the rope, a small red metal plate with hand-painted white letters proclaiming “PARE” (STOP).

There is nothing even remotely resembling a safety barrier at this level crossing. Only a one-square-metre sign posted six metres from the railway line warns of the danger.

The people of Tucurinca love Goyo. They say that he and his co-worker, who handles the other 12-hour shift, have saved the lives of three people who attempted to throw themselves in front of the train.

Tucurinca has no sewer system, but it does have an aqueduct, although it only operates for six hours every two days. That is why it is not unusual to see women washing clothes at 10:20 in the morning in the ditch that runs alongside the railway tracks.

This is when the day starts heating up, with temperatures rising to 34 or 36 degrees Celsius by midday.

The women stand in the water up to their waists, soaping, scrubbing and rinsing the clothes. They also wash their hair. They smile and chat while they work. One of the women in the water, Amparo Padilla, says the coal dust doesn’t produce soot, so when clothes are hung up to dry they don’t get dirty.

Ana Rosa Figueras explains that the aqueduct does not reach her hut on the other side of the tracks from the ditch. “I live all alone, and where would I get the strength to haul water?” she commented to Tierramérica*.

In her yard there is an air quality meter, housed beneath a metal cover. “A couple of men come every two days, open it up, look at a paper and write something down. They come to check on the coal dust,” says Figueras.

“They study it, to see if it makes people sick,” she added, never pausing in her scrubbing and rinsing, as if worried that the ditch water would run out.

While she is washing, the slender woman picks her way with difficulty across the railway tracks carrying the clean clothes back to her yard. There she hangs them on the scaffolding where the meter is installed, which she uses as a clothesline.

María Josefa Arteaga, an elderly woman in a bright orange t-shirt, points out that the big coal companies do not pay any compensation for disturbing the life of the village.

People now complain of ailments that were not as widespread before, “when there used to be a train” – in other words, when the train was a passenger train, which carried people and goods to and from the village. Now the train comes but it never arrives: it just keeps on going with its cargo of coal.

People in the region say that the trains spread “illness” and that everything is contaminated by the coal dust, which breeds asthma and chronic bronchitis.

But there are no statistics, or they are not reliable, as noted in the Comptroller General’s report with regard to studies on the different impacts of the coal industry.

The environmental permits do not require the monitoring of suspended particulates smaller than 2.5 microns, something that is “essential for the adoption of measures that could decrease or mitigate the effects on human health that could result from the presence of particulate matter produced by coal export activities,” the report stresses.

Other more obvious impacts of the trains are the continual vibrations, which causes cracks in houses, and the noise, with decibel levels between 10 and 85 times greater than “normal” noise.

“The doors and windows shake. There are houses that are cracked. The owners fill in the cracks, and they split open again,” says cattle merchant Luis González, leaning against the wall outside his home across from the railway tracks.

“At night, the train passes every 15 minutes, 20 minutes at most. I’m used to it now and I don’t wake up anymore. It used to blow its whistle at night. You could hear it coming,” he recounts.

“Of course the train bothers me,” says his neighbour Ramona María Moreno, who was born in 1924 and adds that, if she had protested alone, she would never have reached such an old age.

“If the people don’t take action, there’s nothing that can be done. What good would it do me to complain if the others don’t join in?”

But the industry’s production chain is minimal, which is why it does not directly stimulate the economy, “at least in any appreciable way relative to the value exploited,” states another report from the Comptroller General’s Office, “Minería en Colombia: Fundamentos para superar el modelo extractivista” (Mining in Colombia: A basis for moving beyond the extractivist model), released in May 2013.

That is why in Tucurinca, as in other towns along the way as Colombian coal travels to the world market, the train passes, but it never arrives.