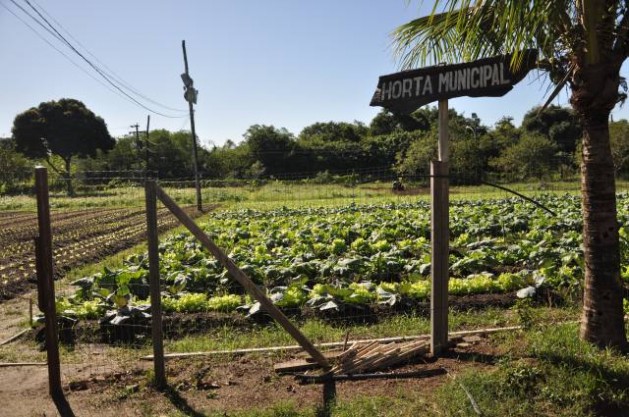 RIO DE JANEIRO, Jul 17 2013 (IPS) - In less than 10 years, consumers throughout Brazil will have access to eight biofortified “superfoods” being developed by the country’s scientists. A pilot initiative is currently underway in 15 municipalities.

Biofortification uses conventional plant breeding methods to enhance the concentration of micronutrients in food crops through a combination of laboratory and agricultural techniques.

The goal is to combat micronutrient deficiencies, which can cause severe health problems like anaemia, blindness, impaired immune response and development delays. According to the United Nations Food and Agriculture Organization, micronutrient malnutrition affects two billion people around the world.

These efforts in Brazil began a decade ago, when the government agricultural research agency, EMBRAPA, initiated the BioFORT project as part of an international alliance for the development of crop varieties with higher concentrations of essential micronutrients.

“We are working on increasing the iron, zinc and provitamin A content. These are the nutrients most lacking not only in Brazil, but in the rest of Latin America and the world as well, the cause of what we call hidden hunger,” food engineer and BioFORT coordinator Marília Nutti told Tierramérica*.

Iron is key. Half of Brazil’s children suffer from some degree of iron deficiency, said Nutti.

The scientists are working on the breeding of plants of the same species, choosing seeds that exhibit the best traits in terms of micronutrient content.

“This is not transgenics. We want a varied diet. Biofortification attacks the root of the problem and is aimed at the poorest sectors of the population. It is scientifically viable and economically viable as well,” she stressed.

The project is supported by HarvestPlus and AgroSalud, research programmes that are operating in Latin America, Africa and Asia with funding from the Bill and Melinda Gates Foundation, the World Bank and various international development agencies.

How much more nutritious are these new foods? The iron content of the beans, for example, has been raised from 50 to 90 milligrams of iron per kilogram. The cassava, which normally contains almost no beta-carotene, now contains nine micrograms of this Vitamin A source per gram.

The beta-carotene content of sweet potatoes has been boosted from 10 micrograms per gram to a whopping 115 micrograms. And the zinc content of rice has been enhanced from 12 to 18 milligrams per kilo.

In Itaguaí, an industrial municipality 70 kilometres south of Rio de Janeiro, some 8,000 preschool children are already benefiting from these extra nutritious “superfoods”.

With a population of around 110,000, Itaguaí has an annual gross domestic product of 14,000 dollars, with most salaried workers earning two minimum wages, about 600 dollars a month. These conditions made it an ideal location for EMBRAPA to kick off the project, distributing the food grown to the municipality’s public schools, where it is used to prepare school lunches.

For now, the municipality is growing sweet potatoes, squash, beans and cassava on a one-hectare plot that is also used to train the family farmers who supply the schools.

“Itaguaí is a model municipality. This is the third year in a row that we have won the award for the best school lunch management. We have very ambitious plans to quickly reach the entire municipal education system in partnership with all of the family farmers,” said Ivana Neves Couto, the municipal secretary of environment, agriculture and fisheries.

The system encompasses 62 schools and 17,000 students. In 2010, the local authorities incorporated the nutrient-enriched foods in school lunches at 13 preschool centres, with a total enrolment of around 8,000 children.

The goal now is to include all of the municipality’s family farmers in the project, and within two years, to offer biofortified foods in all of its schools, as well as stores and public markets in the city.

One factor that works in favour of the new foods is the natural curiosity of children. “When we tell them that these foods have more vitamins, and they see the deeper colours (of the biofortified crops), they are eager to try them out,” Couto told Tierramérica.

Brazil is the only country working with eight biofortified crops. Bangladesh, Colombia, India, Mozambique, Nicaragua, Pakistan, Peru, the Democratic Republic of Congo and Uganda are all conducting research on one crop each.

The challenge, said Nutti, is for biofortification to be adopted as a matter of national policy for the promotion of food security, following the example of Panama, which has already incorporated it on the government agenda.

The Brazilian initiative is currently in the pilot stage of cultivation, with crops now being grown in 11 states. A total of 15 municipalities are currently using the foods for school snacks and lunches.

Although the project was initiated in Itaguaí, the focus for the future is on states in the Brazilian Northeast, such as Maranhão, Piauí and Sergipe, which are the country’s poorest.

In total, there are now some 67 farming units and 1,860 family farmers directly involved in the production of biofortified crops.

This is a rather small scale for a country with 5,570 municipalities and a population of around 200 million.

A diet lacking in iron and zinc can cause anaemia, reduced work capacity, immune system impairments, development delays, and even death. Anaemia is the leading nutrition-related problem in Brazil.

Some 10 million dollars has been invested in the EMBRAPA project, which currently involves 15 universities, as well as a number of research centres and municipal governments.

In 2014, the agency plans to carry out an assessment of the project’s nutritional impact on the population, by measuring the results achieved with its “superfoods” in comparison with conventional food crops.