WASHINGTON, Oct 19 2013 (IPS) - Hopeful statements emerging from this week’s talks between Iran and the great powers have clearly set back foes of any détente between Washington and Tehran, but they are far from giving up the fight. 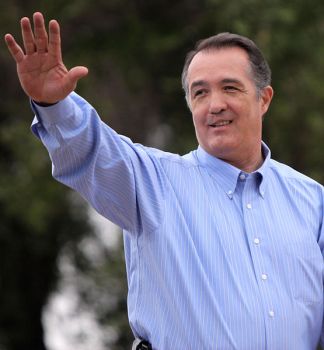 Arizona Rep. Trent Franks and more than a dozen of his colleagues in the House introduced a resolution calling not only for more sanctions, but also an Authorisation of Military Force (AUMF) against Iran. Credit: Gage Skidmore/cc by 3.0

Iran hawks here are pushing hard for Congress, where they enjoy the greatest influence, to approve a new set of extra-territorial sanctions – albeit with some tactical adjustments to take account of the newly hopeful mood coming out of Geneva – before the next round of talks between Tehran and the so-called P5+1 (the U.S., Britain, France, Russia, China plus Germany) scheduled for Nov. 7-8 in the Swiss city.

Much will depend on how hard the administration of President Barack Obama presses sceptical Democrats – particularly those most closely associated with the powerful Israel lobby here – on putting off pending legislation at least until after the next round, and the persuasiveness of the chief U.S. negotiator, Undersecretary of State for Policy Wendy Sherman, in briefing lawmakers about the past week’s talks during which she also held a rare one-hour bilateral meeting with her Iranian counterpart, Deputy Foreign Minister Abbas Araqchi.

Diplomats involved in the talks have so far been remarkably tight-lipped about the details of the proposals put forward by Araqchi and his boss, Foreign Minister Javad Zarif – a fact which is seen as a sign of the seriousness with which the proposals are being considered in western capitals. Sherman’s briefings will be held behind closed doors.

Before this week’s talks, the hawks, who have generally taken their cues from Israeli Prime Minister Benjamin Netanyahu, were hoping for swift passage by the Senate of new sanctions legislation that was approved last by the House of Representatives by a 400-20 margin last July, shortly after the election of the most moderate of Iran’s presidential candidates, Hassan Rouhani.

Among other provisions, it aims to effectively embargo Iran’s oil exports by penalising foreign companies or countries that buy them. It would also freeze the cash reserves Iran is holding in foreign escrow accounts by sanctioning banks that allow Tehran access to them and target other foreign companies that do business with Iran’s shipping and automotive sectors.

The legislation’s main designers include the Foundation for the Defense of Democracies (FDD), which has been heavily funded by wealthy U.S. businessmen close to Netanyahu’s Likud Party, such as casino magnate Sheldon Adelson, hedge fund billionaire Paul Singer, and Home Depot founder Bernard Marcus.

They have made little secret of their desire to wage what its Canadian executive director, Mark Dubowitz, has called “economic warfare” against Tehran that will either force it to completely abandon its nuclear programme, including giving up any uranium enrichment on its territory, or face “regime change” through the total collapse of its economy.

Even as the P5+1 convened their meeting with Zarif on the banks of Lake Geneva, Republican hawks in Congress pressed the case. Florida senator (and likely presidential hopeful) Marco Rubio introduced a resolution that not only endorsed additional sanctions, but also demanded that the president not provide any sanctions relief sought by Iran until it had verifiably dismantled its entire nuclear programme.

At the same time, Sen. Mark Kirk, a top beneficiary of campaign cash from political action committees associated with the American Israel Public Affairs Committee (AIPAC), warned British Prime Minister David Cameron that any compromise that would leave Iran with the ability to enrich uranium, even at very low levels, would be comparable to Neville Chamberlain’s “appeasement” policy toward Adolf Hitler in 1938.

Some Republican zealots went even further, with Arizona Rep. Trent Franks and more than a dozen of his colleagues introducing a resolution calling not only for more sanctions, but also an Authorisation of Military Force (AUMF) against Iran which he said would “strengthen the president’s hand” in the talks, a position which Sen. Lindsay Graham, a leading hawk, has also pushed in recent months.

To most Iran experts, however, these legislative initiatives appear designed more to scuttle the negotiations than to further the prospects for success, which is broadly defined here as an accord that includes verifiable guarantees that Tehran will not be able to reach “breakout capability” to quickly build a nuclear weapon in exchange for dismantling the bilateral and multilateral sanctions regimes that have been erected against it.

“The imposition of still more sanctions, and the rattling of more sabers through legislation that refers to military force, are the sorts of Congressional actions that would be a slap in the face of a new Iranian administration that has just placed a constructive proposal on the negotiating table, would feed already understandable Iranian suspicions that the United States is interested only in regime change and not in an agreement, and thereby would weaken the Iranian incentive to make still more concessions,” wrote Paul Pillar, a retired CIA veteran who headed the U.S. intelligence community’s Middle East and South Asia analysis from 2000 to 2005, on his blog on nationalinterest.com Thursday.

That proposa is believed to have featured Iran’s willingness to place verifiable limits on all aspects and facilities that make up its nuclear programme, including its enrichment of uranium, within one year. It was apparently sufficiently serious and comprehensive to prompt an unprecedented joint statement by Zarif and the P5+1 top negotiating official, European Union foreign policy chief Catherine Ashton, that described the talks as “substantive and forward looking” and will now be the subject of talks between P5+1 and Iranian technical experts in the run-up to the Nov. 7-8 meeting.

It also appears to have put the hawks, who are particularly worried that Obama could soon begin easing existing sanctions in exchange for Iranian concessions as part of a confidence-building process, on the back foot.

On Friday, for example, the normally hawkish Washington Post editorial board, while noting that a final deal “would require far greater concessions than the regime appears to be contemplating,” nonetheless wrote that “it is worth exploring a settlement that permits a token amount of enrichment while locking down the program to minimise the chance of an undetected breakout.”

More surprising perhaps were remarks by Gary Samore, the Obama administration’s top proliferation hawk during his first term who now heads United Against Nuclear Iran (UANI), a pro-sanctions group closely allied with FDD and AIPAC, to the Financial Times.

Adding new sanctions now, he warned “would look to much of the rest of the world as if the U.S. was blowing up the negotiations. It would play into Iran’s hands, giving them an excuse to accelerate their programme,” he said, noting that Obama’s position vis-à-vis key Democrats in Congress has strengthened as a result of his clear victory this week over Republicans on the government shutdown.

Finally, one key Democratic hawk who had strongly favoured quickly adding new sanctions before this week’s talks, Senate Foreign Relations Committee chairman Robert Menendez, also appears to be having second thoughts, telling Congressional Quarterly Thursday that he had not made a decision as to when sanctions should move forward.

In light of these events, sanctions proponents appear to be modifying their approach. While Samore appears to agree with the administration that the present moment to seek new legislation is not the most opportune, Dubowitz is actively promoting quick Senate passage on the pending bill subject to an amendment that would allow Obama to unfreeze Tehran’s cash reserves in foreign escrow accounts in exchange for Iranian concessions on the nuclear programme without weakening or risk unravelling the existing sanctions regime.

Such a scheme, however, would also give Congress the power to put a “hold” on Obama’s decision to permit Iran’s access to its funds, a provision that may well appeal to lawmakers sceptical of all the optimism coming out of Geneva, but that is unlikely to be viewed favourably by the White House, which resents legislative interference in its diplomacy.

And Tehran would no doubt see any new sanctions legislation – no matter how it is billed — as the latest attempt by the Israel lobby to derail negotiations before they can get up a real head of steam.