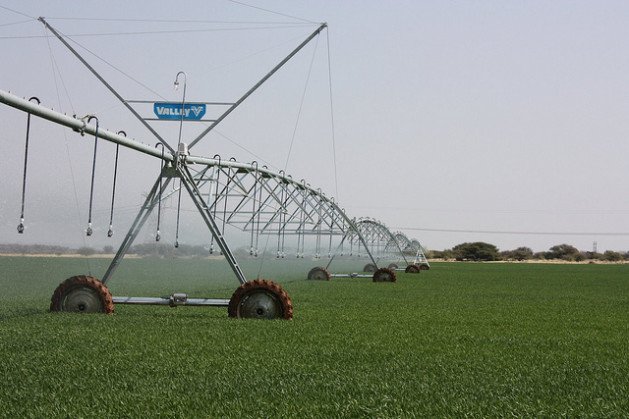 Irrigation near Kakamas, South Africa. Experts at the African Development Bank (AfDB) say they have witnessed irrigation systems that have been designed based on ecosystems and river basins that have later dried up. Credit: Patrick Burnett/IPS

WARSAW, Dec 9 2013 (IPS) - Africa can achieve sustainable development by scaling up “green economy” initiatives. What is needed is increased allocations from within national budgets supplemented by donor funding, claim experts.

The United Nations Environment Programme (UNEP) defines a green economy initiative as one that results in “improved human well-being and social equity, while significantly reducing environmental risks and ecological scarcities.”

In its simplest expression, a green economy is low-carbon, resource efficient, and socially inclusive – according to UNEP.

And now, experts say that embracing this initiative through a concept known as “Low-Carbon Climate Resilient Development” – meaning engaging in projects that will help reduce greenhouse gas emission, help adapt to climate change while boosting income, will help Africa move towards sustainable development

“We do not need to destroy our ecosystem in order to build a road,” said Professor Anthony Nyong, who heads the Gender, Climate Change and Sustainable Development Unit at the African Development Bank (AfDB). “If you need to develop a coal power plant for example, you can come to the Africa Development Bank and propose to put up a solar power plant with a similar output as a way of addressing climate change, and that can form a case for the bank or any similar institution to pay the cost difference,” said Nyong explaining the way countries can raise funds from a bank like the one he works for.

He points out that many of the projects on the ground have not been sustainable. “We have witnessed irrigation systems that have been designed based on ecosystems and river basins that have later dried up, or are likely to dry up in the coming years,” he told IPS at the negotiations on climate change in Warsaw, Poland. “It is time to make decisions based on properly identified science.”

Nyong’s work at the AfDB is in line with the Low-Carbon Climate Resilient Development approach, which calls for governments to develop policies that will enable them to simultaneously adapt to climate change, reduce carbon emissions and contribute towards economic development.

Agriculture is one of the sectors that can be used to address the low-carbon development approach, said Tom Owiyo, a senior specialist for Agriculture and Climate Change – African Climate Policy Centre at the U.N. Economic Commission for Africa. “There is need to invest more in agriculture, so that it is not seen merely as a social engagement for the poor,” he said.

However, the low-carbon climate development concept involves all the sectors of economy including power generation, where countries are encouraged to invest in climate friendly power plants, the transport sector, the manufacturing sector, among others.

In a side event at the COP19, Henry Neufeldt, head of climate change research at the World Agroforestry Centre (ICRAF) said that the global food system emits between 9.5 and 14.7 gigatonnes of carbon into the atmosphere every year. This amounts to between 19 to 29 percent of the total greenhouse gases bothering the world today.

Yet some of the methods that can be used to reduce such emissions include minimum tillage, rotation with legumes, intercropping with legumes, growing drought tolerant crops, and use of improved storage and processing technologies.

In the livestock industry, Neufeldt advocates for increased feeding efficiency, improved rangeland management, efficient treatment of manure and improved livestock health. And if one has to grow trees, then they should be multipurpose trees.

Dr Wilbur Ottichilo, a legislator and environmental expert who is a member of Kenya’s negotiating team in Warsaw, gives an example.
“Farmers in different parts of the country are already practicing farming with minimum tillage as a way of improving soil health and sequestering carbon, and so on,” said the legislator.

“We now have very successful projects such as “climate-smart” villages in different parts of the country, where farmers are working in groups to produce more from small pieces of land using appropriate technologies,” Ottichilo told IPS.

The “smart village” is a project implemented by the research program on Climate Change, Agriculture and Food Security (CCAFS) of the Consultative Group on International Agricultural Research (CGIAR) with funding from the World Bank.

Through the initiative, farmers have learnt how to keep their farms evergreen throughout the year, which makes them earn more, they are trying their hands on greenhouse farming for the first time, drip irrigation, among other techniques that have increased their food production by 60 percent,  while at the same time fighting climate change.

In the same country, the AfDB and other institutions have invested heavily in generation of electricity using geothermal plants. As well, the country is also putting up a wind driven power generation plant with funding from multilateral donors. “These are all low-carbon development projects that will cut down on emissions, increase adaptation, and at the same time generate revenue for the country,” said Ottichilo.

Merlyn Van Voore, an adaption specialist with UNEP, told an event on the sidelines of the Nov. 11-22 talks in Warsaw that, if well executed, climate-smart agriculture has the potential to reduce greenhouse gas emissions by between 1 and 4 billion tonnes by 2020“We hope the developed countries at the Warsaw conference will reach a compromise to support such adaptation, mitigation and development projects in the developing countries, and as well honor their pledges to cut their emissions for the common goal of making the world a habitable place,” said Ottichilo.