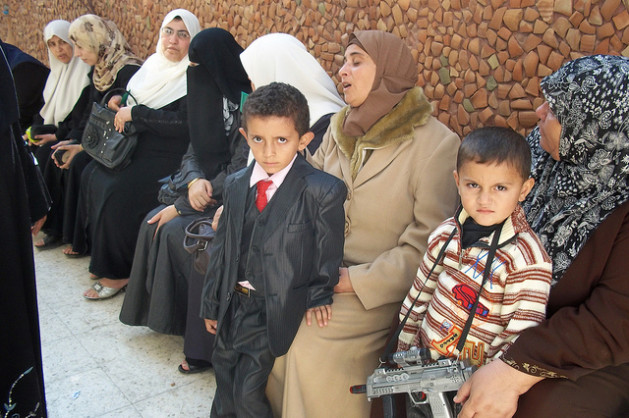 Queuing for food at an NGO centre in Gaza. Credit: Erica Silverman/IPS

UNITED NATIONS, Dec 5 2013 (IPS) - As the international community fleshes out a new set of Sustainable Development Goals (SDGs) to be unveiled next year, civil society activists and U.N. officials agree their success will hinge on policies that address the nexus of poverty, hunger and environmental degradation.

Secretary-General Ban Ki-moon, who is making a strong push for a politically realistic set of SDGs, points out the latest grim statistics: more than one billion people are still living in extreme poverty and over 840 million are perilously hanging on the edge of starvation and hunger.

"Industrial agriculture, resource extraction by corporations and the international trade system all work against the hungry." -- Anuradha Mittal

Danielle Nierenberg, co-founder of the U.S.-based NGO Food Tank, told IPS, “The urgency of finding ways to alleviate hunger, obesity, and poverty in the world is more important than ever before.”

As the SDGs to replace the existing Millennium Development Goals (MDGs) are being developed, there is a real opportunity to fight the root causes of hunger – poverty and lack of access to and affordability of food – while also finding economically sustainable ways of protecting the environment, she added.

And government, businesses, farmers, and civil society all recognise that the time to act is now – especially as climate change is taking a bigger toll all over the world, said Nierenberg, a former director of the Food and Agriculture Programme at the Washington-based Worldwatch Institute.

A U.N. high-level panel, co-chaired by heads of government from Indonesia, Liberia and UK, provided a roadmap last May aimed at eradicating poverty and hunger – possibly by 2030. How that target can be achieved will be left in the hands of an Open Working Group, comprising some 30 U.N. member states, which is expected to formulate its recommendations for SDGs next year.

The proposed SDGs will be an integral part of the U.N.’s post-2015 economic agenda and a successor to the MDGs targeted to end in 2015.

The MDGs aimed at reducing by half the number of people living in extreme poverty and hunger by 2015.

But that goal is unlikely to be reached by most of the world’s poorer nations, primarily in Africa.

Jomo Kwame Sundaram, assistant director general and coordinator for Economic and Social Development at the Food and Agriculture Organisation, told IPS the FAO, like the other Rome-based agencies, remains committed to the single goal on food security and nutrition.

“FAO has already committed itself to completely eradicating hunger and malnutrition,” he added.

Sundaram said it is always difficult to prove that the MDGs contributed to reducing the number of people living in hunger.

The 1996 World Food Summit had in fact committed to halving the number of hungry people, in contrast to MDG (1c) which set the target of halving the proportion or share of hungry people. By defining the original poverty line primarily in terms of what it takes to avoid being hungry, the MDG (1a) poverty target indirectly gave attention to hunger as well, he said.

And by setting up a High-Level Task Force on World Food Security in response to the food price spikes in early 2008, the secretary-general has also drawn attention to the MDG hunger target.

Such efforts have continued to focus attention on the MDG hunger target, noted Sundaram.

Anuradha Mittal, executive director of the San Francisco-based Oakland Institute, told IPS agriculture and hunger are key elements of the discussion around a proposed new set of SDGs.

“It is essential for future agriculture and food security policies to be thought and designed in the context of climate change, environmental degradation and economic globalisation,” she added.

Nierenberg told IPS the fight against food loss and food waste is just one example of how farmers, businesses, and non-governmental organisations (NGOs) can work together to establish better infrastructure to protect crops or develop better ways of getting food that would have otherwise been wasted to people in need.

In the post-2015 agenda, there is great potential to look at agriculture as the solution to some of our most pressing social and environmental challenges, whether its unemployment, conflict, urbanisation, and even climate change, she noted.

Mittal pointed out that the most effective ways to reduce hunger and and poverty in the world are also recognised as the best ways to address the challenges of environmental degradation and climate change.

These include actions and policies in favour of sustainable, low-input agriculture, agro-ecological methods that should primarily target the rural poor in developing countries, and primarily family farms and herders.

“It is an opportunity to have an impact on several fronts. But it is also a challenge as industrial agriculture, resource extraction by corporations and the international trade system all work against the hungry and contribute significantly to environmental degradation and climate change,” Mittal said.

She said the U.N.’s new development agenda must recognise and address this threat, and take decisive steps against the current development paradigm dominated by the promotion of foreign investment, which often translates into extraction of resources versus actual development for the people.