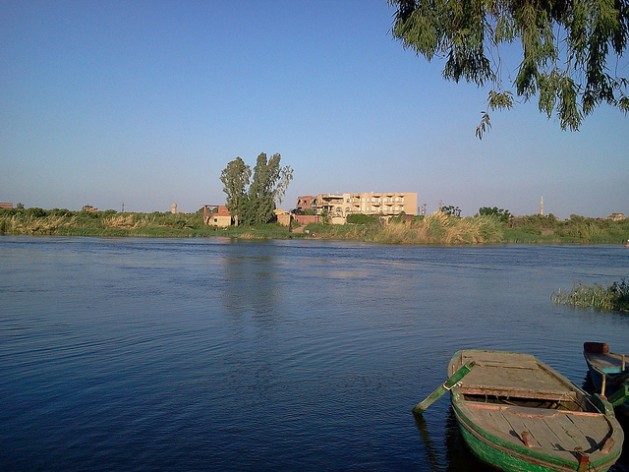 The recent row between Cairo and Ethiopia over Nile water is just one example of looming conflicts over water in the Middle East. Credit: Khaled Moussa al-Omrani/IPS

WASHINGTON, May 20 2014 (IPS) - The Middle East’s seemingly endless conflicts are diverting attention and resources from a graver long-term threat that looms over the whole region: the growing scarcity of water. And the situation will get worse before it gets better — if it ever does get better.

Years of war, careless water supply management, unchecked population growth, ill-advised agricultural policies, and subsidies that encourage consumption have turned a basically arid part of the world into a voracious consumer of water. The trajectory is not sustainable.

Those were the gloomy if unsurprising conclusions of a three-day conference on the subject in Istanbul last week. From Libya to Iraq to Yemen, too many people and too many animals have stretched water resources beyond their limits. Some countries where the urgency is greatest, including Syria and Yemen, are the least equipped to stave off serious water crises.

Jordan, always short of water, has been overwhelmed by a flood of refugees from Syria. Iraq, which once had ample water, has lost critical supplies to war and to dams built by Turkey upstream on the Tigris and Euphrates.

Egypt has twice as many people as it did 50 years ago, with no additional water resources. The isolated Gaza strip has been grappling with a water crisis for years. And Yemen’s scarce water supply is being gobbled up by the unchecked production of qat, a high-water crop with no nutritional value. Chewing the mildly narcotic qat leaf is Yemen’s national pastime.

“If you give them more water, they’ll just grow more qat,” one gloomy conference participant said.

But not all the news is bad. Stable countries with lots of money, led by Saudi Arabia, are making notable progress in supply, management and consumer education.

Elsewhere, however, the prognosis is grim. No one predicted an outbreak of “water wars,” or armed conflict over water supply, a spectre that has often been evoked but has never materialised.

But at some point in the not too distant future, water shortages could provoke mass migrations, human hardship, crop failures and some form of “triage” among populations as governments are forced to allocate supplies, said conferees, who cannot be named due to conference rules.

It’s not as if all this has gone unnoticed. The Middle East’s water issue has been the subject of news articles, analyses by groups such as the U.N. Food and Agriculture Organisation, and studies by think tanks and humanitarian groups for years.

The Istanbul conference of scientists, policy analysts and academics from eight countries — conducted on an island in the Sea of Marmara under the title “High and Dry: Addressing the Middle East Water Challenge” by the Hollings Center and the Prince Muhammad Bin Fahd Strategic Studies Program at the University of Central Florida — is the latest of many such gatherings.

But little has come of them because the region has never been stable enough for sufficient time to make any comprehensive, multilateral solution possible.
According to analyses by the World Bank, the U.S. State Department and others, a majority of the countries defined as “water-poor” — those with access to less than 1,000 cubic metres per person per year — are in the Middle East and North Africa.

The State Department also predicts that climate change will add to the problem by bringing “consistently lower levels of rainfall.”

No government or international agency can increase rainfall or snow runoff. But the Istanbul conferees heard that the example of Saudi Arabia — the world’s largest country without a river — shows that a great deal can be done in countries with deep pockets and enough time to focus on the issue.

Saudi Arabia reorganised its government in the 1990s to centralise water planning and management. Most of the country’s water for personal and household use is supplied by massive desalination plants. The decision to build them, starting in the 1970s, was an obvious one for the kingdom.

But the plants are expensive to construct and operate, leaving them beyond the financial reach of a country like Yemen.

Saudi Arabia meanwhile leads the region in the recapture and reuse of wastewater. Under a new regulation from last year, for example, its giant dairy farms are required to operate on recycled water purchased from the National Water Company rather than on groundwater as in the past.

Once the world’s fifth- or sixth-largest exporter of wheat — the production of which requires massive amounts of water — Saudi Arabia has banned the cultivation of wheat as of 2016 and is refocusing its agriculture on greenhouse production of vegetables and fruit.

Growing animal fodder crops such as alfalfa has been banned; owners of livestock are required to purchase imported fodder, conference participants said. Plagued by leaks in distribution pipes that drained off as much as 25 percent of the water it had, Saudi Arabia privatised its distribution network and encouraged foreign engineering and management companies to participate.

Saudi Arabia has raised the price of water for businesses and institutions, but it has not yet ended the subsidies for households that make water so cheap; there is little incentive to limit consumption.

Doing so would be politically risky in a country where subsidies for water, gasoline, and electricity are expected by a population that has no vote or other influence over the government.

Egypt, by far the most populous country in the region, has a different consumer attitude problem. Egyptians have taken the availability of water for granted since completion of the Aswan High Dam in 1970. As a result, they use waster casually in the home and pump more irrigation water than is necessary onto their fields.

But Egypt’s biggest concern now is Ethiopia’s plan to construct a giant hydroelectric dam on the headwaters of the Nile, reducing the flow and the amount of water stored in Lake Nasser, behind the Aswan Dam.

Asked recently if negotiations over Nile water allocations were taking place between Egypt and the upstream countries, Foreign Minister Nabil Fahmy replied, “No. I wish they were.”

Participants in Istanbul agreed that there is no single remedy for the water crisis. The available fixes range from the simple and obvious, such as consumer education and the installation of low-flow bathroom fixtures, to the aspirational, such as the development of desalination plants powered by solar energy, which are thus affordable.

As usual with such events, the organisers will prepare a paper outlining recommendations. The fact is, however, that solutions, even if available, will be hard to implement until the shooting stops, refugees are resettled, and governments are sufficiently stable to address them. That won’t be soon.

Thomas W. Lippman is an adjunct scholar at the Middle East Institute and author of Saudi Arabia on the Edge.